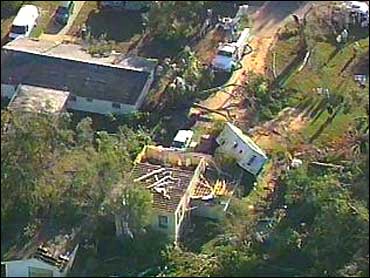 Severe weather, including a confirmed tornado, damaged about 50 homes in central Florida before the system became a subtropical depression Friday and had parts of the Gulf Coast under tropical storm warnings.

The EF-1 tornado struck Eustis with maximum winds estimated near 105 mph. One person suffered a minor cut, and no other injuries were reported in the area about 30 miles northwest of Orlando, Lake County sheriff's Sgt. John Herrell said. Crews went door to door to make sure everyone was safe after the storm.

Radar indicated a tornado touched down late Thursday from a storm system that crossed through the state before spilling into the Gulf of Mexico, forecasters said.

That system developed into a subtropical depression hours later, with tropical storm warnings posted from Apalachicola in Florida's Panhandle westward to the mouth of the Mississippi River, including New Orleans, the National Hurricane Center said.

At 11 a.m. EDT (1500 GMT), the depression had top sustained winds of about 35 mph and was centered about 45 miles southwest of Apalachicola. The depression's center will be moving nearly parallel to the coastline Friday, forecasters said. Rain and wind from the system were still over parts of Florida.

The depression could strengthen slightly, but its poor organization and cool air in the gulf should keep it from becoming more than a weak tropical storm, forecasters said.

"A landfall location is difficult to pinpoint, but in any event the center of a subtropical cyclone is relatively unimportant. Most of the weather associated with the system is well-displaced from the center," senior hurricane specialist James Franklin said.

The city of Eustis was particularly hard hit. "We had about 20 homes that are uninhabitable and have been marked, and about 30 more with some significant damage," City Manager Paul Berg told CBS Radio.

Berg said much of the damage was to roofs and lots of downed trees. "This is an area that has a lot of old, large trees, and we lost quite a few of them," he told CBS.

Herrell said one house has its second story shorn off, but the residents escaped unharmed.

Television news footage showed a boat overturned in a yard, a toppled mobile home and downed trees. About 300 people were without electricity, but power was expected to be restored by sundown, officials said.

Michael Wright told CBS affiliate WKMG correspodnent Jessica D'Onofrio that he was sleeping on a couch seconds before winds sucked the home's roof away - and then the room.

"I stood up because the house was shaking," Wright said. "By the time I stood up and made it through the doorway, the roof blew off." The home was destroyed.

Brett MacLaughlin said he, his mother and stepfather were sitting on their back porch, watching the thunderstorm, when they noticed odd cloud formations and an eerie quiet.

"That's when we started to hear the freight train that everybody talks about," said MacLaughlin, 20. "It just got louder. The wind picked up immensely within seconds."

The trio ran into the bathroom, where water began pouring out of the toilet as the apparent tornado passed. After the two-minute ordeal, MacLaughlin said he walked out of the bathroom to see a jumble of glass and leaves in the home. A 1950s-era barn behind the home was demolished, he said.

The late-night storm caused much less damage than the deadly tornadoes that hit the same area in the dark, early morning hours of Feb. 2, killing 21 people and destroying hundreds of homes in Lake, Sumter and Volusia counties.

Tropical storm warnings have been posted from Apalachicola, Fla., west to the mouth of the Mississippi. "Some strengthening is forecast and the depression could become a sub-tropical or tropical storm sometime today," the National Hurricane Center's Michelle Mainelli told CBS Radio.

"We're looking at coastal storm surge flooding of one to two feet above normal tide levels, two to four inches of rainfall, with maximum amounts of six inches," Mainelli said.

Gulf Coast residents and the oil industry were making early preparations ahead of the depression.

In Louisiana, which was smacked by Hurricane Katrina two years ago, the governor declared a state of emergency late Thursday, putting the National Guard on alert and school buses, ambulances and evacuation shelter workers on standby.

Oil industry workers have left five production platforms in the gulf, and three drilling rigs have been evacuated, according to the federal Minerals Management Service. In Mississippi, officials in coastal Hancock County handed out sandbags.

Meanwhile, in the Pacific, Hurricane Ivo weakened slightly Friday and was expected to become a tropical storm over the weekend before plowing into a desolate part of southern Baja California on Monday. The Category 1 storm had sustained winds of about 75 mph and was moving to the north at about 8 mph.

Authorities in the resort of Cabo San Lucas, Mexico, began advising residents to buy water and food. The area was hit Sept. 4 by Hurricane Henriette, which killed 10 people and destroyed about 2,000 homes.