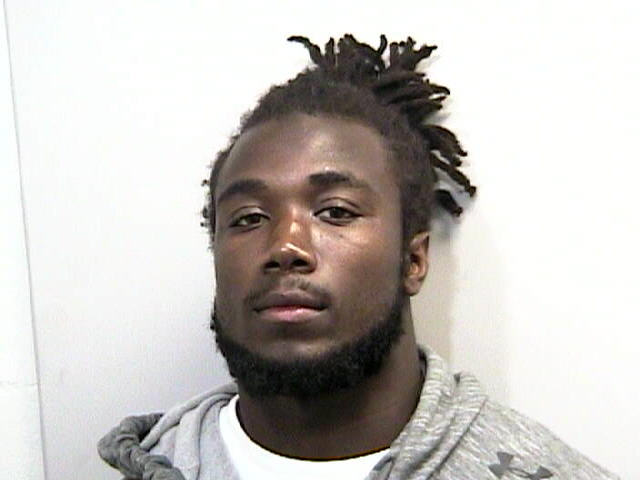 TALLAHASSEE, Fla. -- For the second time in two weeks, a Florida State University football player has been charged with punching a woman.

FSU running back Dalvin Cook was indefinitely suspended from the team after he was charged Friday with punching a woman outside a downtown bar. He turned himself in to police Friday night and was released on bond early Saturday.

The incident happened June 23 after the popular bar closed at 2 a.m. A witness told police a group of football players began arguing with the alleged victim after one suggested taking her home and having sex and she refused, saying she had a boyfriend.

The woman, Madison Geohegan, told police that during the argument Florida State wide receiver Travis Rudolph came too close to her and she pushed him. At that point, Cook stepped in, asked her why she pushed Rudolph and began swinging at her, she told police.

"She did not know how many times she was struck, but she fell back against a black Jeep parked along the roadway," officer Jerritt Federico wrote in an affidavit.

Cook was restrained by friends, but while held back punched Geohegan in the face, she told police. Police said she had swelling and a bleeding lip. She identified Cook through a photographic lineup.

"Based on that interview with them today, we felt we could, in fact, prosecute for battery," Meggs told CBS affiliate WJAX-TV on Friday.

Cook, 19, led Florida State last year with 1,008 rushing yards as a freshman. He was also second on the team with eight touchdowns. Cook rushed for 177 yards and a touchdown and caught five passes for 43 yards in Florida State's 37-35 victory over Georgia Tech to win the ACC championship.

It's the second time in two weeks that an FSU player has been charged with punching a woman. Freshman quarterback De'Andre Johnson was caught on a surveillance video punching a woman at another bar near campus on June 24. He was suspended after being charged the next day and kicked off the team earlier this week when the video was made public.

Johnson, however, had yet to play a game for Florida State, while Cook has been expected to be a key to the team's offense this year.

"We spend a good deal of time educating our student-athletes about appropriate behavior and their responsibilities as representatives of Florida State. The majority of our players are exemplary, but clearly we must place an even stronger emphasis on this," coach Jimbo Fisher said in a statement released by the school.

"I remain committed to educating our young men and holding them accountable for their actions," Fisher said. "We will do better. I will not tolerate anything less."

"This will include Coach Fisher meeting immediately with his team to reiterate, in no uncertain terms, our expectations of them. I also plan to meet with the team, and we will be asking professionals who deal with these matters, including State Attorney Willie Meggs, to speak with them," Thrasher said. "It is unfortunate that the actions of a very few individuals are causing embarrassment to their teammates and this university."

A phone number for Cook was not immediately available, and it was unclear if he has a lawyer. Geohegan didn't immediately return a call seeking comment.