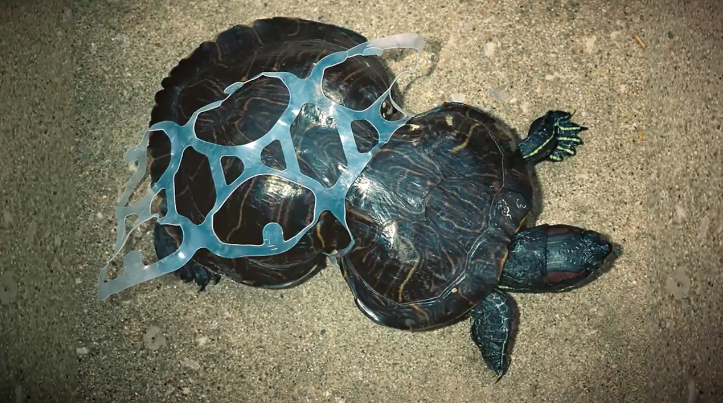 The threat of plastic waste to marine wildlife is well known; the most ubiquitous image of its impact is that of seafaring turtles and gulls ensnared in the net-like rings that yoke six-packs of canned beverages together. Now one Florida brewery is rolling out a solution for making them safer.

Saltwater Brewery, based in Delray Beach, is working with the startup E6PR (short for Eco Six Pack Rings) on a "sustainable way of handling cans." The project is a collaborative effort between New York ad agency We Believers, Mexican biodegradable supplier Entelequia, and private investors from the beverage packing industry.

Manufactured with "by-product waste and other materials," the reimagined rings will be compostable when disposed of properly, and biodegradable if they end up being littered.

"More than 50 percent of beer consumed in the U.S. is sold in cans," said We Believers co-founder Marco Vega, "a trend that is only expected to grow in the near future. Most of the material used to hold these cans is still plastic."

Plastic waste can linger for decades, and even after breaking down it persists in the form of "microplastics" that still threaten wildlife when mistaken for food. The Gulf of Mexico has some of the highest reported levels of microplastics on earth. E6PR rings reportedly break down to non-harmful particles in less than a year.

That could be a big help for America's southerly waters. Research conducted at Louisiana State University suggests that over 5 million tons of plastic end up in the ocean at large each year, and the Gulf of Mexico takes the brunt of waste from middle-American cities that funnel down the Mississippi toward the Gulf.

The Gulf of Mexico has been through a lot in recent years. The Deepwater Horizon oil spill, the flooding of chemicals resulting from recent hurricanes, and the dead zone funneling out of the Mississippi River have all taken a toll, but plastics are a perennial problem both in the Gulf and worldwide.

A recent report by the World Economic Forum and Ellen MacArthur Foundation estimates that by 2050, our oceans will contain more plastic than fish by weight.

E6PR is just one of many ideas that could help turn the tide toward  cleaner waters.

Dutch entrepreneur Boyan Slat is the creator of a passive system for the collection of marine plastic waste. The nonprofit developing the net-like apparatus, aptly named "The Ocean Cleanup," plans to launch their project in the Pacific this year, with plans for worldwide application by 2020.

The SeaBin Project, launched by Australian surfers Andrew Turton and Pete Ceglinski, has a similar function on a smaller scale. Their bucket-like device has already begun to be utilized at docks and marinas to draw trash and oil like a drain and trap it while filtering clean water back out.