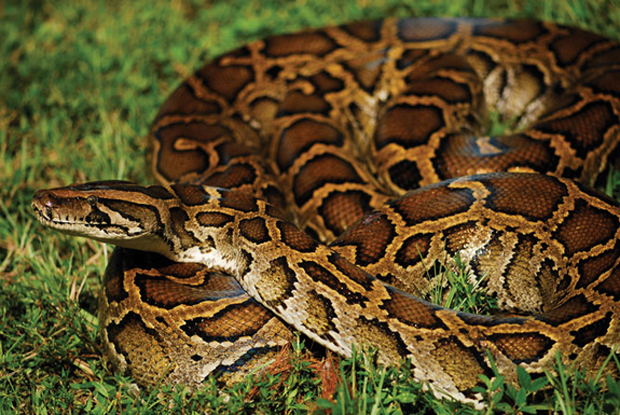 Most snakes don't boast strong internal navigation systems, but Burmese pythons have evolved unusually accurate internal maps and compasses that guide them home from many miles away, according to a new report.

Burmese pythons -- one of the largest species of snakes in the world, capable of growing more than 18 feet (5.5 meters) long -- are native to southern Asia. However, they have become increasingly problematic invasive species in southern Florida over the past 15 years as a result of the (intentional or unintentional) release of pet snakes. They now span a habitat of more than 390 square miles (1,000 square kilometers) through southern Florida, including much of Everglades National Park.

In hopes of better understanding and managing the ever-increasing Floridian python population, a team of researchers based at Davidson College in North Carolina studied the ability of the pythons to find their way back to a given location after being transported elsewhere. [Photos: Giant Pythons Invade the Everglades]

The researchers gathered six snakes from Everglades National Park, attached radio transmitters to the animals and then placed them between 13 and 22 miles (21 and 36 km) away from where they were captured. The scientists then observed the snakes' ability to find their way home.

To the researchers' surprise, all but one of the snakes were able to find their way back to within just 3 miles (5 km) of their original location. In previous studies, other snake species have wandered around hopelessly, unable to find their way home, or have been able to navigate successfully back but from shorter distances. This is the longest distance a snake has ever been found to navigate back to a given location, the team reports.

"We were very surprised by the findings," study co-author Shannon Pittman, a postdoctoral researcher at Davidson College, told Live Science. "We were expecting the snakes to display wandering movements but then develop home ranges closer to where we released them."

A variety of external signals may help build the snakes' navigation system, including magnetic cues that may help inform the map -- as is the case in some sea turtle populations -- and magnetic, celestial or olfactory cues that may help establish a compass. The researchers are unsure which cues the snakes rely on, and plan to assess this question in future work.

The new findings provide useful insights for management groups working to control the python population. In particular, the study demonstrates the snakes may fearlessly travel across seemingly unsafe terrain in search of food or other resources with confidence that they will be able to return home easily.

"It might mean that they could crisscross areas of inhospitable habitat at a greater frequency than we might expect based on what habitat is good," Pittman said. "The navigational capacity is so sophisticated that we think that it might really have implications for the behavior of the dispersers." Dispersers subadult pythons that explore and sometimes inhabit new territory.

The recent rise in python numbers correlates closely with a recent decline in certain mammal species in Florida, likely due to the snakes preying on animals. Gut contents of pythons have been found to contain various mammals, including opossums, rabbits, muskrats, raccoons and even adult deer. That trend further motivates the researchers to understand ways to manage the growing snake population, Pittman said.

The study findings are detailed March 18 in the journal Biology Letters.