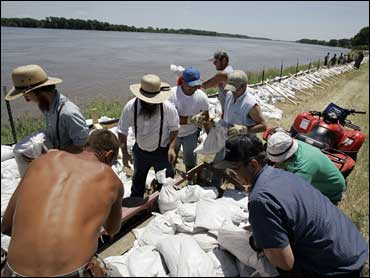 Floodwaters breached two levees in western Illinois on Wednesday and threatened more Mississippi River towns in Missouri, offering little reprieve for the Midwest where much of eastern Iowa was inundated by some of the worst flooding that state has seen in years.

The breaches flooded farmland near the hamlet of Meyer, Ill. and south of there in the Indian Graves levee district, Adams County Emergency Management Agency spokeswoman Julie Shepard said.

Meyer, a town of 40 to 50 people, had to be evacuated, and authorities patrolled the town Wednesday morning to make sure no one was left behind, she said.

Officials monitored levees in other Mississippi River towns in Illinois and Missouri in hopes that they would hold.

Meanwhile, House leaders announced a deal that paves the way for billions of dollars in emergency flood relief for the region.

In Clarksville, Missouri - a historic artists' town of 500 between St. Louis and Hannibal, Missouri - National Guard members, inmates and students were sandbagging. Five blocks were already swamped, but volunteers were doing their best to save buildings housing the shops of artisans and craftsmen.

"We fix one thing and it breaks," Mayor Jo Anne Smiley said. "Sewers are plugged up. We have leaks in walls and people who need things. We're boating in food to people."

Even after a devastating flood in 1993, Clarksville residents refused to move to higher ground - to instead live up to its motto: "Touch the Mississippi."

They stayed despite intense pressure from the federal government which spent more than $4 billion in 12,000 flood mitigation projects that included buying up low-lying land and homes in dozens of counties across nine states, reports Bowers. Even with all that's been done, the levee systems remain vulnerable which leaves river towns with tough decisions.

Flooding that began about a week ago in eastern Iowa caused more than $1.5 billion in damage as it crept south toward the Mississippi. About 25,000 people in Cedar Rapids were forced from their homes, 19 buildings at the University of Iowa were flooded and water treatment plants in several cities were knocked out.

In addition to Clarksville, the floodwaters are also a problem for communities like Gulfport, Illinois.

Lois Russell was among those there who watched her house get inundated with water.

"I'm not going back after this one," Russell said as she watched water surround her house. It was the third time she had fled her home because of flooding since 1965.

"It was a good placed to raise my seven kids," she said, crying. "I know I haven't lost anything that feels important because I have a big family."

Authorities rescued people by helicopter, boat and four-wheeler on Tuesday after the river broke through a levee in Gulfport. Later in the week, the Mississippi is expected to threaten a host of others communities, leading officials to consider evacuation plans and begin sandbagging.

But even as the water threatened scores of homes and businesses, officials said the damage could have been worse if the federal government had not purchased low-lying land after historic floods in 1993 that caused $12 billion in damage.

Do You Need Disaster Insurance?

Since then, the government bought out more than 9,000 homeowners, turning much of the land into parks and undeveloped areas that can be allowed to flood with less risk. The Federal Emergency Management Agency has moved or flood-proofed about 30,000 properties. The effort required whole communities to be moved.

In Iowa, FEMA spent $1.6 million to buy out residents of Elkport, population 80, and then knock down the village's remaining buildings. Some residents moved to Garber, Elkport's twin city across the Turkey River, but others abandoned the area.

The federal government bought about a quarter of the homes in Chelsea, Iowa, after the 1993 floods, but most of the 300 residents stayed. At least 10 homes are now inundated by the Iowa River to their first floors.

"For the most part, it's another flood," he said. "For Chelsea, it's more of an inconvenience."

On Tuesday, people were urged to evacuate an area near Gulfport as floodwaters threatened about 12 square miles of farmland. Henderson County Deputy Sheriff Donald Seitz said a major highway could be under 10 feet of water by midday Wednesday.

Reports of raw sewage and farm runoff in floodwaters raised concerns about public health. But experts said most people are smart enough to avoid the tainted water.

On the Iowa side of the river, a sandbagging operation was moved south to the outskirts of Burlington after floodwaters streamed across state Highway 99.

Officials were also concerned about the integrity of a levee that protects a drainage area south of Oakville.

"It's outrageous," said Steve Poggemiller. "We're hanging on by a thread - or a sandbag."

Jeff Campbell, a farmer carrying sandbags on his four-wheeler, said he spotted pigs swimming away from a flooded hog farm near Oakville. They were climbing a levee, poking holes in the plastic that covered it, he said.

One tired pig was lying at the bottom of the levee "like a pink sandbag," Campbell said.

Reports of raw sewage and farm runoff in floodwaters raised concerns about public health. But experts said most people are smart enough to avoid the tainted water.

"Typically we don't see the outbreaks of diseases that people fear," said Mike Allred of the Centers for Disease Control and Prevention.

The rising water forced the closure of the Mississippi bridge in Burlington and stopped car traffic on the bridge in Fort Madison. The bridge's railroad tracks remained open. A bridge downriver in Keokuk also remained open.

To the north in Cedar Rapids, floodwaters had dropped enough that officials let hundreds of people return to their damaged homes and businesses.

"It's obviously much more shocking when you walk in the door for the first time and see what happened," said Amy Wyss, watching sullenly as a giant blower was used to dry out her upscale wine bar, Zins. "I don't think you can be prepared for this, even if you think you are."

The National Weather Service expects crests this week along some Mississippi River communities near St. Louis to come close to those of the historic 1993 floods.