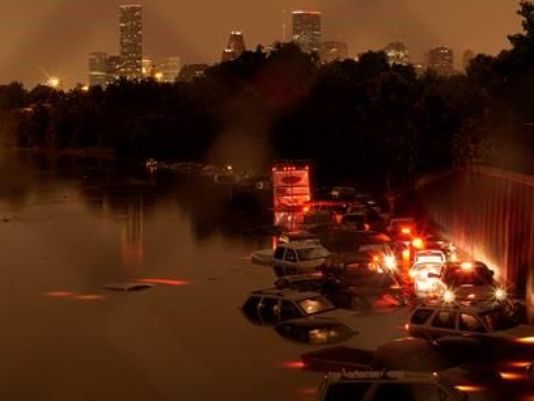 WIMBERLEY, Texas -- Recovery teams were set to resume looking Tuesday morning for the 12 members of two families who authorities say are missing after a rain-swollen river in Central Texas carried a vacation home off its foundation, slamming it into a bridge downstream.

Trey Hatt, a spokesman for the Hays County Emergency Operations Center, said Monday night that the "search component" of the mission was over, meaning no more survivors were expected to be found in the flood debris along the Blanco River. But recovery efforts were to resume Tuesday morning, following a long holiday weekend of severe weather that led to four confirmed fatalities across Texas.

Authorities were also searching for victims and assessing damage just across the Texas-Mexico border in Ciudad Acuna, where a tornado Monday killed 13 people and left at least five unaccounted for.

In the U.S., a line of storms that stretched from the Gulf of Mexico to the Great Lakes dumped record rainfall on parts of the Plains and Midwest, spawning tornadoes and causing major flooding that in Texas destroyed or damaged more than 1,000 homes and forced at least 2,000 residents to leave their homes.

The governor has declared disaster areas in 37 counties so far, allowing for further mobilization of state resources to assist.

Authorities urged residents to stay off the roads. An announcer at the Houston Rockets game asked fans not to leave because of severe weather as the contest ended.

A funnel cloud was reported in West Houston Monday evening, but most of the damage reported as of early Tuesday was a result of street flooding, KHOU says.

The Harris County Regional Joint Information Center said two bayous and other waterways were out of their banks and numerous roadways were impassable. The center said reports indicated some homes may have taken on water.

Evacuations were underway in Austin, Texas, due to rising water threatening homes with the city experiencing its wettest May on record. The Austin American-Statesman reported early Tuesday that some houses in a neighborhood in eastern Travis County had flooded after the Deck Creek left its banks.

Emergency crews went door to door in the neighborhood early Tuesday looking for anyone else who needed to be evacuated, reports CBS Austin station KEYE-TV.

The storm system also prompted reports of tornadoes across the state and was blamed for the deaths of a man whose body was pulled from the Blanco, a 14-year-old who was found with his dog in a storm drain, a high school senior who died Saturday after her car was caught in high water, and a man whose mobile home was destroyed by a reported tornado.

The worst flooding damage was in Wimberley, where the vacation home was swept away, a popular tourist town along the Blanco in the corridor between Austin and San Antonio.

Witnesses reported seeing the swollen river push the home off its foundation and smash it into a bridge. Only pieces of the home have been found, Hays County Judge Bert Cobb said.

One person who was rescued from the home told workers that the other 12 inside were all connected to two families, Cobb said. Young children were among those believed to be missing.

The Blanco crested above 40 feet -- more than triple its flood stage of 13 feet. The river swamped Interstate 35 and forced parts of the busy north-south highway to close. Rescuers used pontoon boats and a helicopter to pull people out.

Hundreds of trees along the Blanco were uprooted or snapped, and they collected in piles of debris that soared 20 feet high.

State officials were urging towns south of Wimberley to be prepared as overflowing rivers there continued to move downstream, increasing the threat of more flooding, correspondent Arenas reports.

The Oklahoma Department of Emergency Management also reported four fatalities between Saturday and Monday across the state, which also saw severe flooding and reported tornadoes.

In Ciudad Acuna, Mayor Evaristo Perez Rivera said 300 people were treated at local hospitals after the twister, and up to 200 homes had been completely destroyed. The government was talking with families whose homes had been damaged to determine how much assistance would be needed to rebuild the city of 125,000 across from Del Rio, Texas.

"We have never registered in the more than 100 years in the history of this city a tornado," he said.

By midday, 13 people were confirmed dead - 10 adults and three infants. At least five people were unaccounted for.

The twister hit a seven-block area, which Victor Zamora, interior secretary of the northern state of Coahuila, described as "devastated."

"There's nothing standing, not walls, not roofs," said Edgar Gonzalez, a spokesman for the city government, describing some of the destroyed homes in a square mile stretch.

Mexican President Enrique Pena Nieto was expected to travel to Acuna with officials from government agencies.

Gonzalez said late Monday night that rescuers were looking for four members of a family who were believed missing, adding that there were still areas of rubble that remained to be searched. Zamora said rescuers were searching for an infant who was missing after the tornado ripped the baby carrier the child was in from its mother's hands.