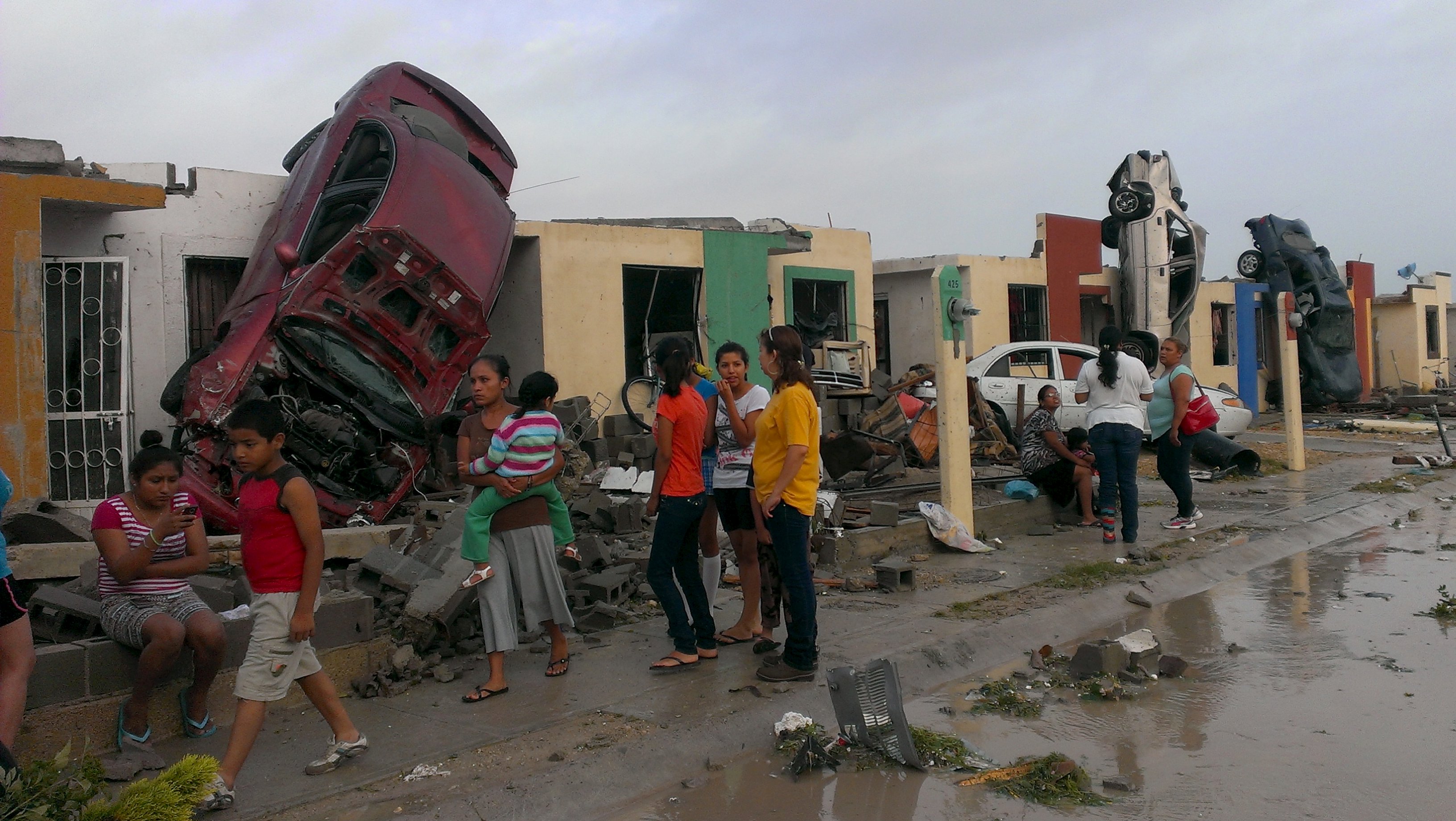 MEXICO CITY -- A tornado raged through a city on the U.S.-Mexico border Monday, destroying homes, flinging cars like matchsticks and ripping an infant from its mother's arms. At least 13 people were killed, authorities said.

In Texas, 12 people were reported missing in flash flooding from a line of storms that stretched from the Gulf of Mexico to the Great Lakes.

The baby was also missing after the twister that hit Ciudad Acuna, a city of 125,000 across from Del Rio, Texas, sent its infant carrier flying. Rescue workers began digging through the rubble of damaged homes in a race to find victims.

The twister hit a seven-block area, which Victor Zamora, interior secretary of the northern state of Coahuila, described as "devastated."

Three hundred people were being treated for injuries at local hospitals, and 400 houses were fully or partially destroyed, said Edgar Gonzalez, spokesman for the city government.

"There's nothing standing, not walls, not roofs," Gonzalez said, describing some of the destroyed homes in a 1-square-mile stretch.

Family members and neighbors gathered around a pickup truck where the bodies of a woman and two children were laid out in the truck's bed, covered with sheets. Two relatives reached down to touch the bodies, covered their eyes and wept.

Photos from the scene showed cars with their hoods torn off, resting upended against single-story houses. One car's frame was bent around the gate of a house. A bus was seen flipped and crumpled on a roadway.

The twister struck not long after daybreak, around the time buses were preparing to take children to school, Zamora said.

In the U.S., the weather system dumped record rainfall on parts of the Plains and Midwest, spawning tornadoes and causing major flooding that forced at least 2,000 Texans from their homes. A vacation house in Texas was swept away by a rain-swollen river.

Former Nueces County Commissioner Joe McComb says his 36-year-old son, Jonathan, is hospitalized in San Antonio with multiple injuries after the house was knocked off its foundation and carried down the raging river Sunday. It struck a bridge and then began breaking up.

Jonathan McComb's wife and their two children are among the missing, reports CBS affiliate KEYE-TV in Austin.

The Episcopal Church of the Good Shepherd says five members of two families from the Corpus Christi church also were in the house and are missing.

Four others inside also managed to escape.

Joe McComb told CBS affiliate KHOU-TV in Houston he was on vacation in Hawaii for his 44th wedding anniversary when he got the news.

McComb said he was told his son's family was staying at the river house with other couples in the Wimberley area when a wall of water took the home off it's foundation. McComb said at some point the families were all together but then hit possibly a bridge or embankment and were all separated.

The storms were blamed for three deaths Saturday and Sunday, including two in Oklahoma and one in Texas, where a man's body was recovered from a flooded area along the Blanco River, which rose 26 feet in an hour and created huge piles of debris.

The line of heavy weather was expected to linger over a large swath of the region Monday.

Among the worst-affected communities were Wimberley and San Marcos, which are in Central Texas along the Blanco River in the corridor between Austin and San Antonio.

"It looks pretty bad out there," Hays County emergency management coordinator Kharley Smith said of Wimberley, where an estimated 350 to 400 homes were destroyed. "We do have whole streets with maybe one or two houses left on them and the rest are just slabs."

About 1,000 homes were damaged throughout Hays County. Five San Marcos police cars were washed away, and the firehouse was flooded, said Kristi Wyatt, a spokeswoman for San Marcos.

Rivers swelled so quickly that whole communities awoke Sunday surrounded by water. The Blanco crested above 40 feet - more than triple its flood stage of 13 feet. The river swamped Interstate 35 and forced parts of the busy north-south highway to close. Rescuers used pontoon boats and a helicopter to pull people out.

After a surge of mud and water flooded their cottage in Wimberley, John and Valerie Nelson fled through waist-deep waters in darkness early Sunday with transformers sparking and trees crashing around them. The single-story house had been carefully rebuilt on stilts so that it would be able to withstand even the worst flooding.

"I'm absolutely dumbfounded," said Valerie Nelson, who has owned the property for about 50 years. "I didn't think the water would ever get that high."

Hundreds of trees along the Blanco were uprooted or snapped, and they collected in piles of debris that soared 20 feet high.

"We've got trees in the rafters," said Cherri Maley, the property manager of a house where the structure's entire rear portion collapsed with the flooding, carrying away furniture.

"We had the refrigerator in a tree," she said. "I think it's a total loss."

A tornado briefly touched down Sunday in Houston, damaging rooftops, toppling trees, blowing out windows and sending at least two people to a hospital. Fire officials said 10 apartments were heavily damaged and 40 others sustained lesser damage.

Dallas faced severe flooding from the Trinity River, which was expected to crest near 40 feet Monday and lap at the foundations of an industrial park. The Red and Wichita rivers also rose far above flood stage.

The recent rainfall may officially end the drought that has gripped the region for years, according to Forrest Mitchell, a meteorologist at the National Weather Service's office in Norman, Oklahoma. He said many lakes and reservoirs are full.