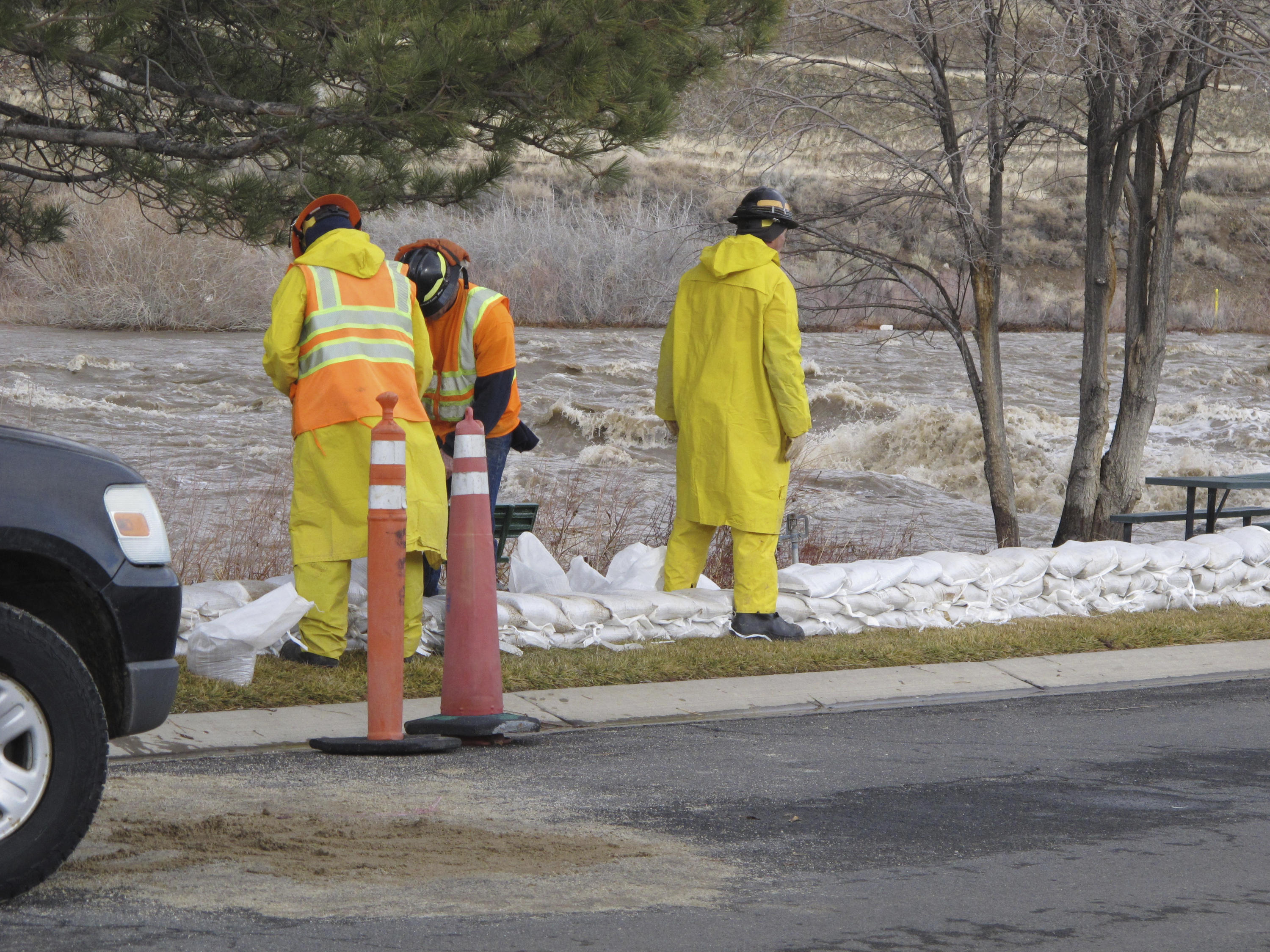 FORESTVILLE, Calif. -- A week of heavy snow and rain in Northern California and Nevada has caused the worst flooding in a decade. Three people were killed near San Francisco.

Emergency crews in rescue boats and helicopters rushed to take advantage of a one-day break between storms Monday to rescue stranded people and assess damage after the heaviest rain in a decade overwhelmed parts of California and Nevada.

A weekend storm dumped more than a foot of water on parts of Northern California, forcing hundreds of people to evacuate and leaving thousands without power. The system raised rivers out of their banks and toppled trees, among them the fabled giant sequoia dubbed “Pioneer Cabin” that had a tunnel carved into its base more than a century ago. Another strong storm was bearing down on the region for Tuesday.

Such gaps between storms are “what saves us from the big water,” Fire Chief Max Ming said in the Russian River town of Forestville, where rescuers launched rafts and used a helicopter to search for people cut off by rising water. “People hunker down and wait for it to get past.”

The back-to-back storms that have hit California and Nevada since last week are part of an “atmospheric river” weather system that draws precipitation from the Pacific Ocean as far west as Hawaii. That kind of system, also known as the “pineapple express,” poses catastrophic risks for areas hit by the heaviest rain.

“It’s been about 10 years since we’ve experienced this kind of rainfall,” said Steve Anderson, a National Weather Service forecaster. “We’re getting a little bit of a break today, but we have another storm system arriving tomorrow that’s not quite as potent but could still cause problems.”

Parts of California’s wine country in Sonoma County were among the hardest hit, with up to 13 inches of rain since Friday, Anderson said.

The Russian River in Sonoma rose to its highest level since 2006, spilling over its banks and into vineyards and oak groves. Schools and roads were forced to close across the area.

Avalanche concerns kept some California ski areas closed for a second day Monday in the Sierra Nevada. Forecasters said more snow and rain was on the way.

The Russian River is prone to flooding, but this year’s flood has been particularly worrisome because it threatened to topple trees weakened by six years of drought.

A flood warning for the Russian River was in effect, along with a high wind watch planned for Tuesday afternoon through Tuesday evening, Anderson said.

Jeff Watts, an artist, spent an anxious night listening for the sound of falling trees on his property in Forestville. On Monday, he found his drive to work blocked by a car that had slammed into a tree that had fallen across the road. Emergency crews worked to extract the vehicle.

“I couldn’t get past the tree, so I turned around and I’m doing this,” said Watts, who had pulled over to photograph oak trees and their reflections in the floodwater.

Yosemite National Park will reopen the valley floor to visitors Tuesday morning after it was closed through the weekend and Monday because of a storm-swollen river, park spokesman Scott Gediman said. He said guests will be allowed back in starting at 8 a.m. for day visitors. Park workers were checking the extent of damage from the storm to water and sewer systems, he said.

Over the weekend, toppled trees also crashed against cars and homes and blocked roads in the San Francisco Bay Area. Stranded motorists had to be rescued from cars stuck on flooded roads. The city itself got just over 2 inches of rain.

A giant tree fell across a highway in Hillsborough to the south of San Francisco, injuring a driver who could not stop in time and drove into the tree. And a woman was killed Saturday by a falling tree while she took a walk on a golf course.

To the south near Los Angeles, commuters were warned of possible highway flooding and mudslides in hilly areas.

Mudslides kept road crews busy on the Pacific Coast Highway and Interstate 80,  where it took Dave Wood and his crew 10 hours to clear the mess.

Emergency workers in Nevada voluntarily evacuated about 1,300 people from 400 homes in a Reno neighborhood as the Truckee River overflowed and drainage ditches backed up.

Winter storm warnings were in effect in the Sierra Nevada until Thursday morning, with the potential for blizzard and white-out conditions, said Scott McGuire, a forecaster for the National Weather Service based in Reno.

“People need to avoid traveling if at all possible,” McGuire said.

Four to 8 feet of snow are forecast through Thursday above 7,000 feet, and the Lake Tahoe area could get between 2 to 5 feet of snow, he said.

Schools were canceled Monday in Reno and Sparks, and Gov. Brian Sandoval told all nonessential state government workers to stay home Monday after he declared a state of emergency.