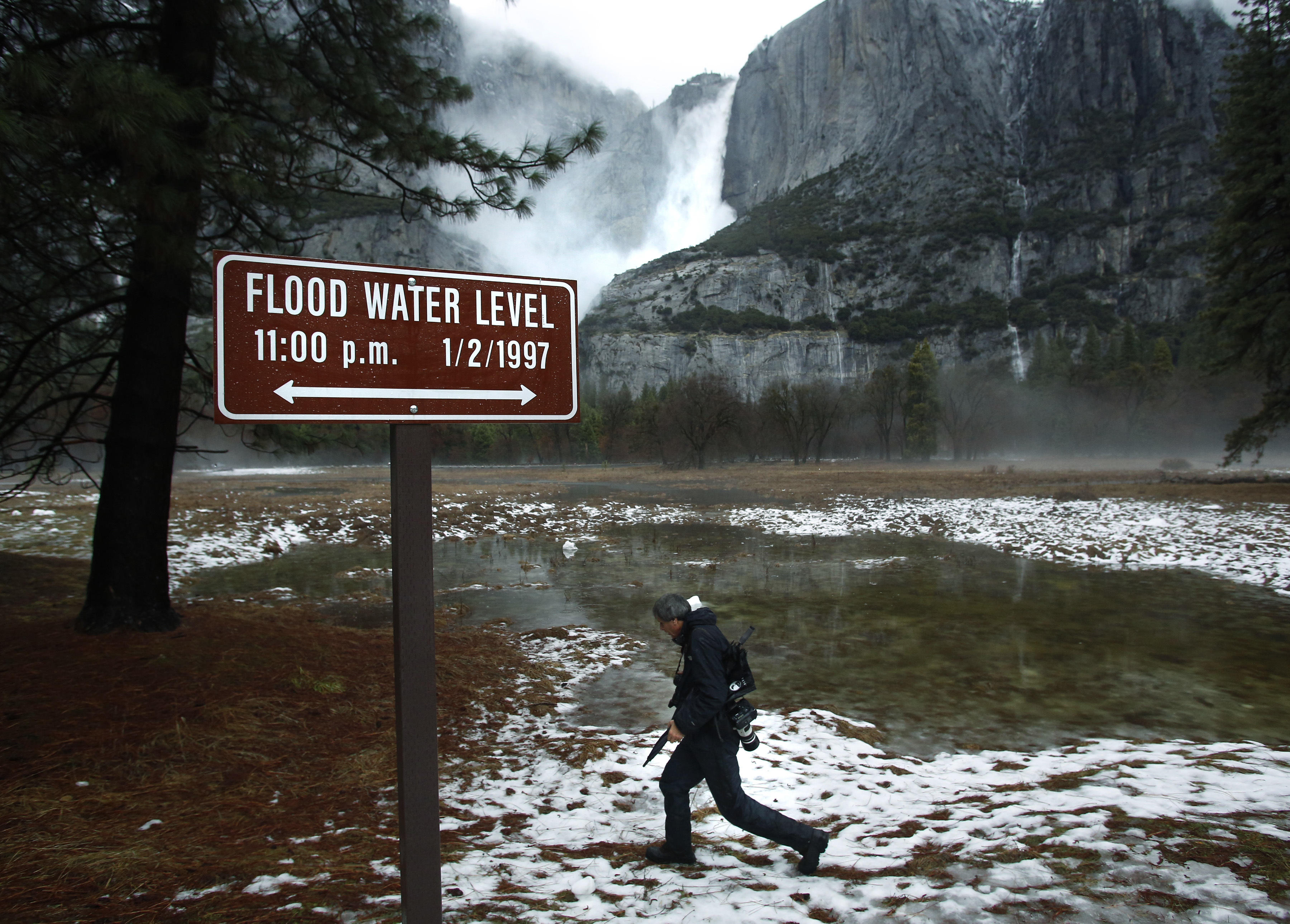 RENO, Nev. – As the East Coast waits to thaw out from a weekend icy mess, another storm is bringing rain and the potential of the worst flooding in more than a decade to the West Coast. Hundreds have fled their homes as the massive winter storm packing heavy rain, damaging winds and lightning caused mudslides and widespread flooding in Northern California and Nevada.

Forecasters are warning of even more heavy rains in northern California and Nevada through the middle of the week, along with an ice storm in Oregon.

The region had been hit over the weekend with a deluge of moisture brought by an “atmospheric river” out of Hawaii.

CBS San Francisco reports the storms arrive as California entered its sixth year of drought. Each drop of rain is welcomed but officials said several more big storms are needed to replenish depleted groundwater supplies. And the drought conditions make it harder for the ground to absorb the excess moisture efficiently, increasing the already high flooding chances.

Relatively mild temperatures were driving up the snowline to above 9,000 feet throughout the Sierra Nevada, causing runoff in the lower elevations, where the ground is saturated. Forecasters said Sunday it was tracking pretty much as they expected.

“For forecasters who’ve been here a decade or more, this is one of the most impressive atmospheric setups that we have seen in a long time for potential flooding in the region,” said Chris Smallcomb, a National Weather Service meteorologist in Reno. “If you had to write a textbook on how to get a flood in the region, you would use a scenario just like this.”

The Russian River in California’s Sonoma County and the Truckee River near Reno, Nevada, overflowed their banks late Sunday and officials said both waterways could stay at the flood stage for days.  Forecasters warned a second storm is expected to hit the already drenched area Monday night.

Schools were canceled in hard-hit Sonoma, where homes were evacuated, thousands were without power and many roads were unpassable.

Fears of avalanches were growing in the northern Sierra Nevada as rain soaked the snowpack.

Crews across Northern California cleared trees and debris following mudslides caused by the steady rain accompanying the system that could dump 15 inches in the foothills of the Sierra and several feet of snow on the mountain tops before it’s expected to move east Monday.

In Nevada, emergency officials voluntarily evacuated 400 homes affecting about 1,300 residents in a south Reno neighborhood Sunday afternoon as the Truckee River began to leave its banks and drainage ditches started to overflow south of U.S. Interstate 80.

“This is a serious flood situation,” the National Weather Service said in a special flood statement late Sunday night. Flood warnings are expected along much of the Sierra’s eastern front and western Nevada into Tuesday

No injuries had been reported, but high waters forced the closure of numerous area roads, a series of bridges in downtown Reno and a pair of Interstate 80 off-ramps in neighboring Sparks, where the worst flooding is expected to send several feet of water early Monday into an industrial area where 25,000 people work.

Bob Elsen of Sparks said he saw plenty of wet weather in his former hometown of Bremerton, Washington, but he didn’t expect it in Nevada’s high desert where only 8 inches of precipitation falls annually on average.

“I don’t think I’ve seen this much rain since I moved here six years ago,” Elsen said as he watched the Truckee River’s waters rise. “It’s why I moved out of Washington to get away from this stuff.”

An avalanche also closed a portion of the Mount Rose Highway connecting Reno to Lake Tahoe for the second time in three days after more than 6 feet of snow fell atop the Sierra last week.

“All first responders are all hands on deck,” Washoe County Emergency Manager Aaron Kenneston told reporters at a briefing in Reno on Sunday afternoon.

The storm surge stretching all the way from Hawaii - called an atmospheric river - comes as California enters its sixth year of drought. Each drop of rain is welcomed, but officials said several big storms are needed to replenish depleted groundwater supplies.

Toppled trees crashed against cars and homes or blocked roads in the San Francisco Bay Area, and officials rescued stranded motorists from cars stuck on flooded roads. A giant tree fell across the southbound lanes of Interstate 230 in Hillsborough, injuring one driver who couldn’t break in time and drove into the tree. A woman was killed Saturday by a falling tree while she took a walk on a golf course.

A well-known giant sequoia tree known for the huge tunnel carved through it that was once used by cars toppled in Calaveras Big Trees State Park in Calaveras County. The San Francisco Chronicle reported the historic Pioneer Cabin tree came down during heavy rains.

Farther north, the U.S. 395 highway was temporarily closed in both directions in Mono County because of flooding and two major highways across the Sierra Nevada were partially closed because of mudslides. Interstate 80 Donner Lake and Highway 50 near Kyburz were blocked for a time by mud and debris.

All roads leading to Yosemite National Park’s valley floor remained closed amid fears that the Merced River could overflow its banks and cause major flooding.