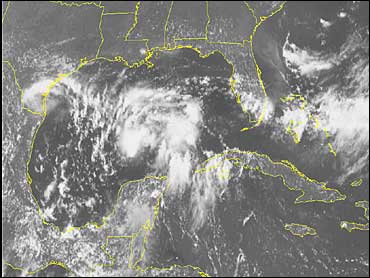 A tropical depression that formed late Tuesday in the Gulf of Mexico threatened to bring heavy rain to already-sodden Texas, as a tropical storm watch was issued for much of the state's coast.

The depression is moving toward the northwest at nearly 10 mph. It was expected to turn west-northwest by late Wednesday. Maximum sustained winds were near 30 mph. A tropical storm has winds of at least 39 mph.

Gov. Rick Perry said he was sending emergency vehicles and personnel to South Texas in advance of the weather system.

"Because storms have saturated much of our state this summer, many communities in this storm's projected path are at high risk of dangerous flash flooding," Perry said in a statement hours before the tropical storm watch was issued.

He said he was sending 30 vehicles and 60 Texas National Guard members to Weslaco and San Antonio, was activating three helicopter rescue swimmer teams and was putting six teams on standby. Volunteer organizations were being prepared to provide mass care support.

National Weather Service forecaster Tim Speece said the system could bring heavy rains as far north as Victoria and as far inland as the Hill Country.

At 11 p.m. EDT, the storm was centered about 1,295 miles east of the Lesser Antilles in the Caribbean, according to the National Hurricane Center. It had top sustained winds of 50 mph, up from 40 mph earlier in the day. Some strengthening was expected within the next day.

Dean was moving over increasingly warmer waters, where atmospheric conditions could create a favorable environment for intensification into a hurricane by Friday, forecasters said. It was cruising west at about 18 mph. Forecasters said it was too early to tell where Dean will go.

Hurricanes have sustained winds of at least 74 mph.

Hurricane forecasters expect this year's Atlantic hurricane season to be busier than average. Last week, they said as many as 16 tropical storms were likely to form, with nine strengthening into hurricanes.

The season runs from June 1 to Nov. 30, but August typically marks the start of the most active period. Ten tropical storms developed in the Atlantic last year, but only two made landfall in the United States.