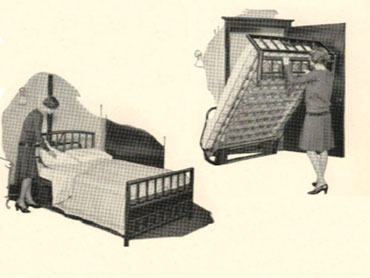 For more than a century, sleepy people with no room to spare have turned to a unique piece of furniture. Here's Serena Altschul:

Since the earliest days of moving pictures, the Murphy bed - you know, the disappearing kind - has played a starring role.

Gene Kolakowski, who runs the Original Murphy Bed Company on Long Island, says nobody really gets stuck in them. "Only in Hollywood," he laughed.

"There's a lot of jokes about that. But, no, it's impossible for the bed to go up. You have to put it away manually."

The company's been making the floor-mounted steel beds since it was started by William Lawrence Murphy in 1900 near San Francisco.

Family legend has it that Murphy was pursuing a young lady but dating rules back then wouldn't let him bring her up to his one-room apartment.

"He was a tinkerer, inventor, and he came up with the idea, 'If I could put the bed away then she can come into my living room," Kolakowski said. Genius!

"And it's only a bedroom when she leaves - that was the concept, and that's what got him started."

Murphy soon moved his company to New York - a booming city where every inch of space counts.

Bed historian Robyn Einhorn is with the Smithsonian in Washington. She says owning one of Murphy's designs became a status symbol.

"People would move into these hotels in New York and they would have a suite which would include a Murphy bed, so they could pick up the bed and have a parlor," Einhorn said.

New York University student Dustin Kreitzberg lives in one of those old hotels. The 1929 building is now apartments, but still has a handful of original, creaky Murphy beds, from their heyday in the 1920s.

"And how do you sleep on it?" Altschul asked.

"I sleep wonderfully, it's super-comfortable, and I always have a good night's sleep to be honest," he said.

In the 300-square-foot studio apartment, the bed frame is a relic from a different time, but the design idea endures - providing two spaces that fit into one.

"It's completely true," said Kreitzberg. "I can entertain people with a nice living room and then when I'm ready to go to sleep I can pull it down and I have a wonderful bedroom."

And these days, he's not alone. Murphy beds are hip again.

Fancy hotels like the St. Francis in San Francisco have them in their suites. Bed stores sell expensive high-end units. There are automated Murphy beds, futuristic Murphy beds . . . even one for Dido.

And they're not just for apartments.

For Ivy Fahrer, a Murphy bed was appealing when she built her whimsical, five-thousand square foot house in Westchester County, New York, even though it has six bedrooms. She showed us her king-size Murphy bed.

"By having a Murphy bed that retracts, I have exactly what I wanted - an all-purpose utility room for all reasons," she said.

Fahrer had the Original Murphy Bed Company build the $20,000 unit she designed, complete with metal finish. Her friends and family all have the same reaction.

William Murphy probably wouldn't have imagined making beds like that 100 years ago, but no doubt he'd be proud of his invention that's saved so many so much space.

... and along the way, given us plenty of laughs.

When The Beatles changed everything
Thanks for reading CBS NEWS.
Create your free account or log in
for more features.
View CBS News In
CBS News App Open
Chrome Safari Continue
Be the first to know
Get browser notifications for breaking news, live events, and exclusive reporting.