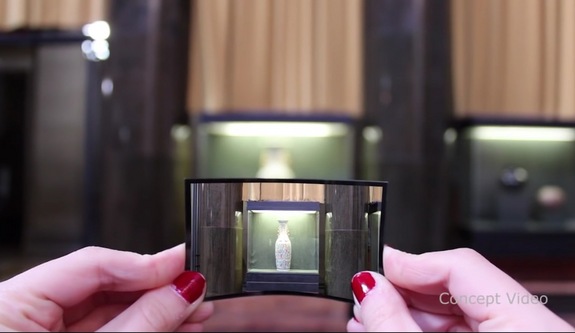 A new camera that looks like a flat sheet of paper is so thin and flexible that it could be wrapped around everyday objects, such as desks, cars, streetlights and even clothing, new research shows.

The new device could help turn any surface into a camera, and the invention may lead to card-size cameras that can flex in order to increase their field of view, the scientists said.

Regular cameras take pictures from a single point in space, but this new device instead seeks to capture images using a flat grid of miniature cameras -- a bit like an insect's compound eye. [Top Picks: Best Cameras of 2016]

"Wouldn't it be interesting to design a camera you can wrap around everyday objects to capture views that would be difficult to do with one or more conventional cameras?" said Shree Nayar, a computer scientist at Columbia University and senior author of the study."Imagine wrapping it around a pole to get a 360-degree view of the world for security purposes," Nayar said."Or, if you want your office desk to be more intelligent, have a sheet on your table that could analyze what's sitting on it."

The ultraflexible camera wouldn't be limited in its views the way conventional cameras are, he added.

"And, if you can work this into clothing, it could help people who are visually impaired be more aware of their environment," Nayar told Live Science.

One possible approach for a camera that is a flexible sheet would involve rigid lenses attached to a pliable sheet. However, bending this sheet would result in gaps between the fields of views of adjacent lenses, the researchers said. This would cause the resulting image to have missing information, they said.

Instead, the researchers developed an elastic sheet made of flexible lenses. No matter how this sheet is bent, there are no gaps between the lenses, the scientists said.

Nayar and his colleagues developed a flexible array that consists of nearly 1,100 lenses made of silicone rubber. By optimizing the geometrical proportions of the lenses and the material properties of the sheet, the scientists found that this array could produce high-quality images even when bent and twisted.

The researchers tested how well their flexible lens sheet created images by focusing the light from all of its lenses onto a single regular camera. Future research still needs to devise a pliable grid of light-detecting image sensors to accompany each of its lenses and truly produce a camera, Nayar said.

The researchers noted that, in principle, it is possible to fabricate a lens array the size of a credit card made up of millions of lenses. One day, it also may be possible to print both the lens and the sensor arrays together, Nayar said.

Nayar and his colleagues Daniel Sims and Yonghao Yue at Columbia University will present their work on May 14 at the International Conference on Computational Photography at Northwestern University in Evanston, Illinois.