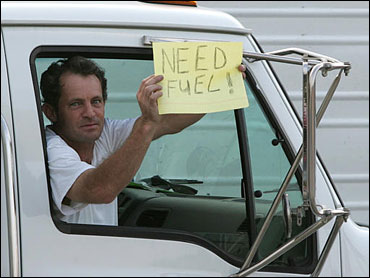 Hurricane Rita is closing in on the Gulf and is expected to hit late Friday or early Saturday, somewhere along a 350-mile stretch of the Texas-Louisiana coastline, very likely in Texas.

In all, nearly 2 million people along the Texas and Louisiana coasts have been told to get out of the way of Rita, which weakened Thursday from a top-of-the-scale Category 5 hurricane to a Category 4 as it swirled across the Gulf of Mexico.

Northern Mexico is also making preparations for Rita and has set up shelters for expected evacuees. The governor of Nuevo Leon state, just across the border, has also contacted Texas Gov. Rick Perry and is offering medical and rescue crews - and shelters, if necessary. Hotels in Monterrey are also pitching in - with reductions in rates for Texas evacuees.

The danger from the Category 4 storm has sent residents of Houston - the nation's fourth largest city and the heart of the oil refining industry - packing Wednesday and Thursday, only to wind up in one of the worst traffic jams ever.

The evacuation along I-45 has been a traffic nightmare, with red brake lights streaming out of Houston and its low-lying suburbs as far as the eye can see. Highways leading inland out of Houston, a metropolitan area of 4 million people, were clogged for up to 100 miles north of the city.

Service stations reported running out of gasoline, and police officers along the highways carried gas to motorists whose tanks were on empty. Texas authorities also asked the Pentagon for help in getting gasoline to drivers stuck in traffic.

With temperatures in the 90s, many cars were overheating, as were some tempers.

"I've been screaming in the car," said Abbie Huckleby, who was trapped on Interstate 45 with her husband and two children as they tried to get from the Houston suburb of Katy to Dallas, about 250 miles away. "It's not working. If I would have known it was this bad, I would have stayed at home and rode out the storm at home."

walking has been faster than driving (video
for much of the day. Cars have been averaging 3 mph.

"This is the worst planning I've ever seen," said Julie Anderson, who covered just 45 miles in 12 hours after setting out from her home in the Houston suburb of LaPorte. "They say we've learned a lot from Hurricane Katrina. Well, you couldn't prove it by me."

Perry urged evacuees to stay calm and be patient.

"You've done the right thing," he said. "You will get out of the coastal region on time. It's just going to take some time."

Despite the troubled evacuation officials insist people are better off suffering on the highways than trying to survive the coming storm.

Thursday, some people were actually trying to get to Houston: CBS News correspondent Peter King found a Continental flight from Orlando packed. "A number of the people I've spoken to are trying to get home so they can get some of their things together and then head right back out of town and evacuate up north," he reports.

To speed the evacuation, Gov. Rick Perry halted all southbound traffic into Houston along I-45 and took the unprecedented step of opening all eight lanes to northbound traffic out of the city for 125 miles. I-45 is the primary evacuation route north from Houston and Galveston.

In Galveston, Texas - a city rebuilt after a Category 4 hurricane in 1900 killed between 6,000 and 12,000 residents in what is still the deadliest natural disaster in U.S. history - the once-bustling tourist island is all but abandoned.

"Some people are hardheaded, I mean, they just want to stay, I mean there's nothing we can do," says Raymond Orozco of the Galveston Police Department.

Rita also brought rain to already-battered New Orleans, raising fears that the city's Katrina-damaged levees would fail and flood the city all over again.

Forecasters have warned of the possibility of a storm surge of 15 to 20 feet, battering waves, and rain of up to 15 inches along the Texas and western Louisiana coast.

In New Orleans, Rita's steady rains Thursday were the first measurable precipitation since Katrina. The forecast was for three to five inches in the coming days, dangerously close to the amount engineers said could send floodwaters pouring back into neighborhoods that have been dry for less than a week.

"Right now, it's a wait-and-see and hope-for-the-best," said Mitch Frazier, a spokesman for the Army Corps of Engineers, which added sandbags to shore up levees and installed 60-foot sections of metal across some of the city's canals to protect against storm surges.