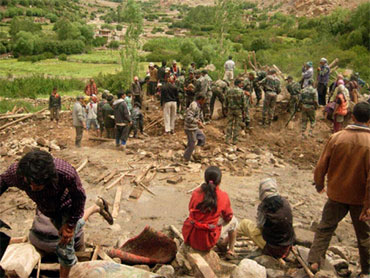 Nearly 2,000 foreign tourists were in the remote region of Ladakh, a popular destination for adventure sports enthusiasts, at the time, said a tourism department official in Srinagar. There were no immediate reports of any foreigners being killed or injured in the floods that started around midnight, said the official who spoke on condition of anonymity because he was not authorized to speak to the media.

At least 370 people were injured, and troops were pulling survivors from knee-deep mud and rubble Friday in the popular Himalayan tourist destination. The deluge came as neighboring Pakistan suffered from the worst flooding in decades, with millions displaced and 1,500 dead.

The airport in Leh, the main town in Ladakh, was damaged, most communications were cut and rescue efforts were being hampered by gushing water and debris, state police chief Khoda said.

It was still unclear how many people have been left homeless, but Khoda said at least 2,000 displaced people had been housed in two government-run shelters.

"Mud and water is everywhere," said Kashmiri businessman Kausar Makhdoomi, who was on holiday in Leh.

Makhdoomi said the rainfall started before midnight and that water later started coursing down mountains. The flooding had damaged several homes and other buildings by Friday morning, he said.

"There was utter confusion and people started to panic," he said.

Ladakh, about 280 miles east of Srinagar, is a popular destination for Western tourists, particularly hikers, mountaineers and adventure sports enthusiasts. August is peak season with thousands flocking to the area.

The flooding also damaged telephone towers and highways leading to the region, Brar said in Srinagar, the main city in India's portion of Kashmir.

One of the worst hit areas was low-lying Choglamsar village on the outskirts of Leh, where houses and buildings have been swept away and soldiers were pulling survivors from mud, Brar said. Floods had badly affected villages within a 60-square mile 150 sq. kilometer radius of Choglamsar, he said.

The floods damaged highways leading to Leh, making it difficult for trucks with relief supplies to enter Ladakh and tourists to get out of the area.

The main highway linking Leh to the nearby holiday resort of Manali was blocked by landslides. The only other highway linking Ladakh was partially open and vehicles waiting to cross had backed up for miles. Poor weather has made it impossible for even helicopters to fly into Ladakh with relief supplies.

"Roads have been washed away and wherever they are intact, sheets of mud have covered them making them difficult for use," Brar said.

At least three army bases were hit by flood waters. Two soldiers were missing and nearly 14 were injured, Brar said. Khoda said that at least three policemen had been killed during rescue operations.

Ladakh is a high-altitude desert, with a stark moonscape-like terrain, about 11,500 feet above sea level. It normally experiences very low precipitation.

A largely Buddhist area, it has been untouched by two months of anti-India civil unrest by Kashmiri Muslims that has gripped large swaths of Indian Kashmir for nearly two months. At least 49 people have died in the violence.

Explaining the devastating impact of the sudden rains, Prof. Shakeel Romshoo, a geologist at Kashmir University in Srinagar, said new rivulets had cut deep channels in the mountain gorges and flood waters had inundated low-lying areas.

"It's a challenging topography with steep and unstable slopes. Water flow and velocity being very high, the flash floods have caused huge damage," he said.

Telecommunication towers across the region have either fallen or been badly damaged. The main highway linking Leh to the nearby holiday resort of Manali was blocked by landslides. Poor weather has made it impossible for even helicopters to fly into Ladakh with relief supplies.

Khoda said police and the army have launched a massive rescue operation but were also trying to restore communications.