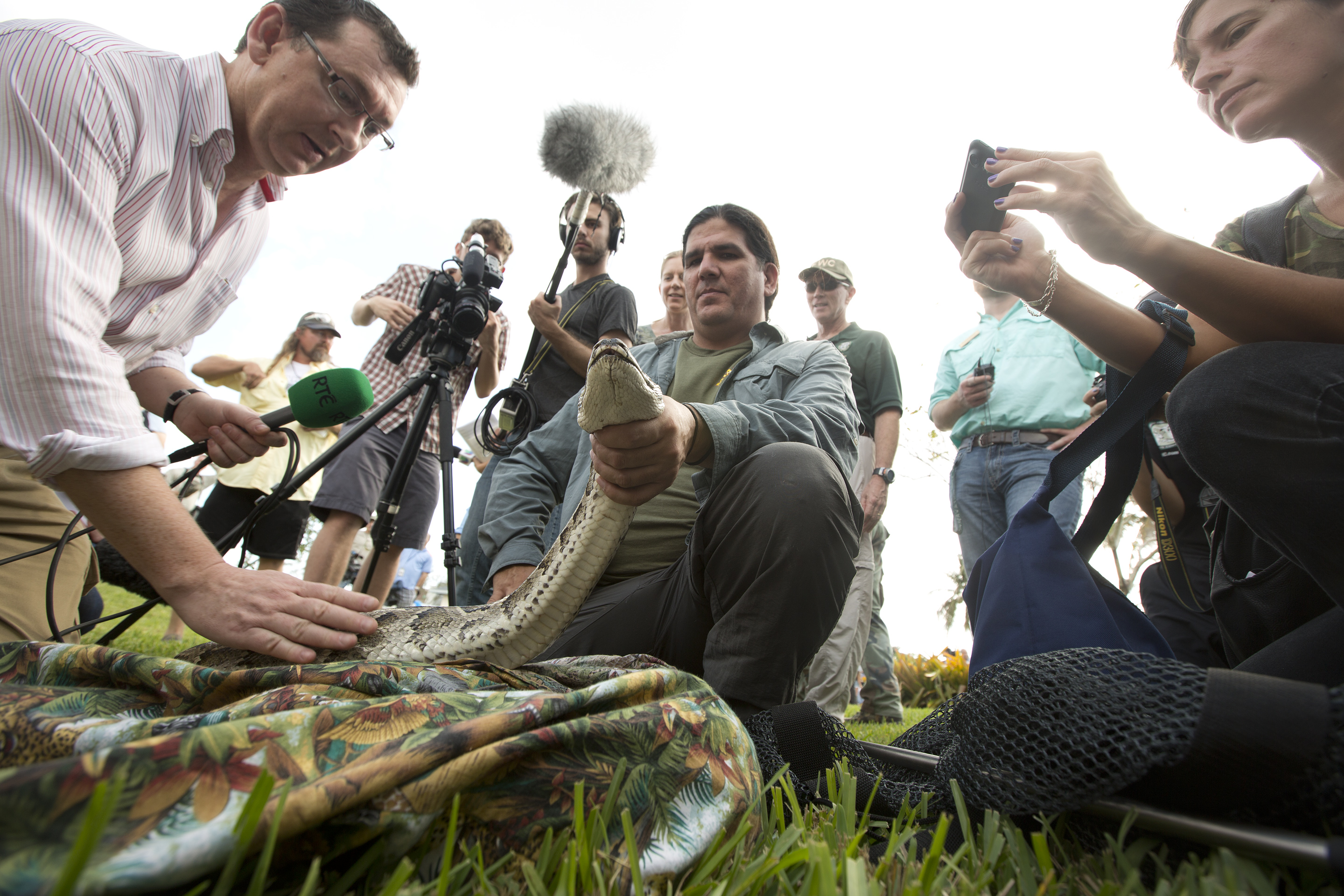 BIG CYPRESS NATIONAL PRESERVE, Fla. An armed mob set out into the Florida Everglades on Saturday to flush out a scaly invader.

It sounds like the second act of a sci-fi horror flick but, really, it's pretty much Florida's plan for dealing with an infestation of Burmese pythons that are eating their way through a fragile ecosystem.

Nearly 800 people signed up for the month-long "Python Challenge" that started Saturday afternoon. The vast majority — 749 — are members of the general public who lack the permits usually required to harvest pythons on public lands.

"We feel like anybody can get out in the Everglades and figure out how to try and find these things," said Nick Wiley, executive director of the Florida Fish and Wildlife Conservation Commission. "It's very safe, getting out in the Everglades. People do it all the time."

Twenty-eight python permit holders also joined the hunt at various locations in the Everglades. The state is offering cash prizes to whoever brings in the longest python and whoever bags the most pythons by the time the competition ends at midnight Feb. 10.

Dozens of would-be python hunters showed up for some last-minute training in snake handling Saturday morning at the University of Florida Fort Lauderdale Research and Education Center in Davie.

The training came down to common sense: Drink water, wear sunscreen, don't get bitten by anything and don't shoot anyone.

Many of the onlookers dressed in camouflage, though they probably didn't have to worry about spooking the snakes. They would have a much harder time spotting the splotchy, tan pythons in the long green grasses and woody brush of the Everglades.

"It's advantage-snake," mechanical engineer Dan Keenan concluded after slashing his way through a quarter-mile of scratchy sawgrass, dried leaves and woody overgrowth near a campsite in the Big Cypress National Preserve, which is about 50 miles southeast of Naples and is supervised by the National Park Service.

Keenan, of Merritt Island, and friend Steffani Burd of Melbourne, a statistician in computer security, holstered large knives and pistols on their hips, so they'd be ready for any python that crossed their path. The snakes can grow to more than 20 feet in length.

The most useful tool they had, though, was the key fob to their car. Burd wanted to know that they hadn't wandered too far into the wilderness, so Keenan clicked the fob until a reassuring beep from their car chirped softly through the brush.

The recommended method for killing pythons is the same for killing zombies: a gunshot to the brain, or decapitation to reduce the threat. (The People for the Ethical Treatment of Animals doesn't approve of the latter method, though.)

Pythons are kind of the zombies of the Everglades, though their infestation is less deadly to humans. The snakes have no natural predators, they can eat anything in their way, they can reproduce in large numbers and they don't belong here.

Florida currently prohibits possession or sale of the pythons for use as pets, and federal law bans the importation and interstate sale of the species.

Wildlife experts say pythons are just the tip of the invasive species iceberg. Florida is home to more exotic species of amphibians and reptiles than anywhere else in the world, said John Hayes, dean of research for the University of Florida's Institute for Food and Agricultural Sciences.

Roughly 2,050 pythons have been harvested in Florida since 2000, according to the conservation commission. It's unknown exactly how many are slithering through the wetlands.

Officials hope the competition will help rid the Everglades of the invaders while raising awareness about the risks that exotic species pose to Florida's native wildlife.

Keenan and Burd emerged from the Everglades empty-handed Saturday, but they planned to return Sunday, hoping for cooler temperatures that would drive heat-seeking snakes into sunny patches along roads and levees.

Burd still deemed the hunt a success. "For me, I take back to my friends and community that there is a beautiful environment out here. It's opening the picture from just the python issue to the issue of how do we protect our environment," she said.