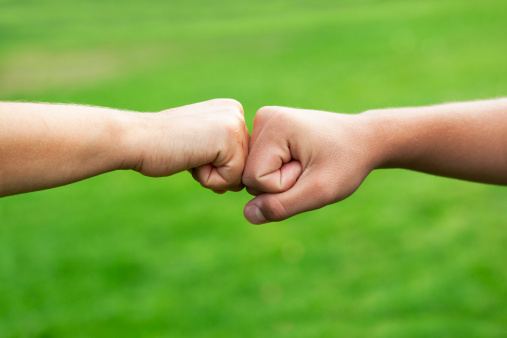 Fist bumping, a form of greeting popularized by President Obama, spreads significantly fewer germs than the more traditional alternative, according to a new study.

A fist bump transmits just one-twentieth the amount of bacteria that a handshake does. It is also a less germy option than a high-five, which still spreads less than half the amount of germs typically spread through a handshake, the new research found.

In the study, published in the August issue of the American Journal of Infection Control, researchers wanted to see whether alternative greetings would transmit fewer germs than the traditional handshake. One greeter immersed a sterile-gloved hand into a container of germs. One the glove was dry, the greeter exchanged a handshake, fist bump or high-five with a sterile-gloved recipient. Then the researchers examined the number of bacteria on transferred during the experiment.

The study was conducted in response to the recent call from the journal JAMA to ban handshakes from the hospital environment.

"Adoption of the fist bump as a greeting could substantially reduce the transmission of infectious diseases between individuals," study author David Whitworth of Aberystwyth University in the United Kingdom said in a statement. "It is unlikely that a no-contact greeting could supplant the handshake; however, for the sake of improving public health we encourage further adoption of the fist bump as a simple, free, and more hygienic alternative to the handshake."

Healthcare providers' hands can spread potentially harmful germs to patients, which may lead to healthcare-associated infections (HAIs). HAIs are some of the leading causes of preventable harm and death in the United States. The Centers for Disease Control and Prevention says that one in 25 hospitalized patients develops an HAI and 75,000 patients with HAIs die during their hospitalization each year.

A fist bump is more sanitary than a handshake because of the smaller amount of surface area in contact between the two hands, the study suggests.

"It's a novel study," though the results are not surprising, said Mary Lou Manning, president-elect of the Association for Professionals in Infection Control and Epidemiology. Manning's organization publishes the journal.

Manning said that she hasn't seen much fist-bumping or high-fiving in hospitals, where handshakes are more common. However, they must be followed by good hand-washing, she added.

Whitworth said he hopes that these habits change. "In a hospital, you really don't want people to shake hands. It's an unnecessary risk," he told the AP.