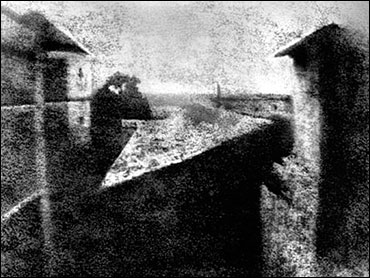 An 1826 image widely acknowledged as the world's earliest photograph is the subject of its own close-up, the first in the half-century since a historian hauled the faint snapshot out of an old trunk.

The fresh portrait of the first photo was unveiled Friday during an Austin, Texas, symposium celebrating the life and work of pioneer photographer Joseph Nicephore Niepce.

The image shows the view from Niepce's family home in the French town of St-Loup-de-Varennes.

The best-known image of Niepce's photograph had been a hand-retouched mosaic compiled from several partial images. Along with the new, unmanipulated reproduction, scientists are presenting the results of an unprecedented checkup on the condition of the 8-inch-by-6.5-inch image, which shows the view from a window of Niepce's family home.

"Altogether, the first photograph is in good shape and has a chance of remaining so for a long time," said Dusan Stulik, a senior scientist at the Getty Conservation Institute in Los Angeles, where experts spent two weeks analyzing the image in 2002.

Conservators since have repaired the image's frame and are building a replacement for the photo's 1960s-era protective case. The new airtight case is a version of one developed to house the royal mummy collection of the Egyptian Museum in Cairo.

"I wanted to know it was there and to know it wouldn't suffer any deterioration in putting it on public display," said Roy Flukinger, senior curator of photography at the Harry Ransom Humanities Research Center at the University of Texas at Austin.

The first photograph was rediscovered in 1952. The center acquired it in 1963. Today, it displays the faint image alongside a Gutenberg Bible, a first in its own right. Altogether, the center houses 5 million photographs, 1 million rare books, 36 million manuscripts, about 60,000 works of art and hundreds of reels of movie film.

The 2002 analysis of Niepce photo confirmed that he used a polished plate of pewter coated with a thin layer of bitumen to create the image.

During an exposure that took anywhere from eight hours to three days, the light-sensitive petroleum derivative hardened. Washing the plate with a mixture of oil of lavender and white petroleum dissolved the unexposed portions of bitumen.

The photograph's view remains to this day and can be seen live over the Internet through the lens of a camera recently set up to mark the symposium.