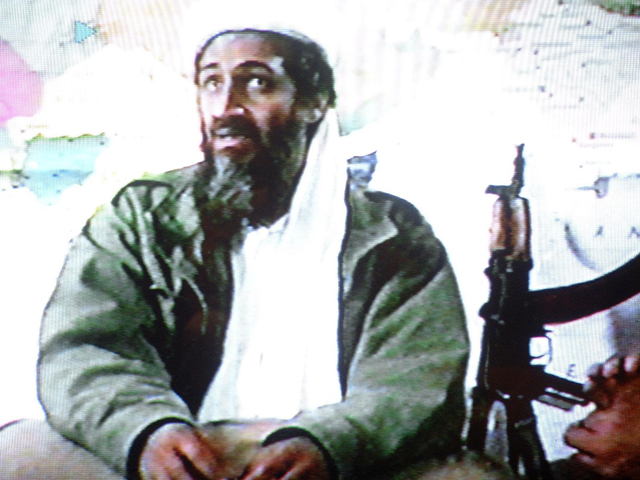 Current and former U.S. officials said that Khalid Sheikh Mohammed, the mastermind of the Sept. 11, 2001 terrorist attacks, provided the nom de guerre of one of bin Laden's most trusted aides. The CIA got similar information from Mohammed's successor, Abu Faraj al-Libi. Both were subjected to harsh interrogation tactics inside CIA prisons in Poland and Romania.

The news is sure to reignite debate over whether the now-closed interrogation and detention program was successful. Former president George W. Bush authorized the CIA to use the harshest interrogation tactics in U.S. history. President Barack Obama closed the prison system.

Bin Laden, the face of global terrorism and architect of the Sept. 11, 2001, attacks, was killed in a firefight with elite American forces in Pakistan on Monday, then quickly buried at sea in a stunning finale to a furtive decade on the run.

Long believed to be hiding in caves, bin Laden was tracked down in a costly, custom-built hideout not far from a Pakistani military academy. The stunning news of his death prompted relief and euphoria outside the White House and around the globe, yet also deepening fears of terrorist reprisals against the United States and its allies.

U.S. officials say inside information was key to the successful operation. The CIA has for decades tried to gain the confidence of people close to the al Qaeda boss. Terror detainees "flagged to us people who were providing direct support" to bin Laden. A lone courier in particular, an associate of other senior al Qaeda members, proved crucial in the end.

The CIA had been hunting that courier for years, ever since detainees told interrogators that the courier was so trusted by bin Laden that he might very well be living with the al Qaeda leader.

According to senior administration officials, Mr. Obama met with his national security team at least nine meetings prior to the operation that ended bin Laden's life. The president's top national security officials met five times themselves, and their deputies seven times. In addition, Mr. Obama has frequent consultations between the NSC, CIA, DoD and other agencies on the bin Laden hunt.

On April 29, Mr. Obama approved an operation to kill bin Laden. It was a mission that required surgical accuracy, even more precision than could be delivered by the government's sophisticated Predator drones. To execute it, Mr. Obama tapped a small contingent of the Navy's elite SEAL Team Six and put them under the command of CIA Director Leon Panetta, whose analysts monitored the compound from afar.

Bin Laden did not go peacefully, according to officials. He resisted arrest and was killed in a firefight as U.S. troops entered the compound. One woman was killed when she was used as a human shield, U.S. officials say, and two women were injured in the raid.

Inside the raid on Osama bin Laden's compound

The Obama administration used DNA testing and other means to confirm that bin Laden was in fact killed, officials said Monday.

The officials, speaking on the condition of anonymity, said the DNA testing alone offered a "99.9 percent" certainty. Detailed photo analysis by the CIA, confirmation by other people at the raid site and matching physical features like bin Laden's height all helped confirmed the identification.

Said one official: "There should be no doubt in anybody's mind, this is Osama bin Laden."

The death of 54-year-old bin Laden marks a psychological triumph in a long struggle that began well before the Sept. 11 attacks. Al Qaeda was also blamed for the 1998 bombings of two U.S. embassies in East Africa that killed 224, people and the 2000 attack on the USS Cole that killed 17 American sailors in Yemen, as well as countless other plots, some successful and some foiled.