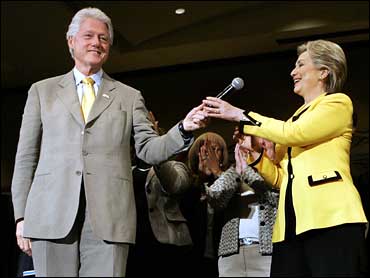 Any notion that William Jefferson Clinton would not be prominent and influential in the potential administration of Hillary Rodham Clinton died of acute silliness in the mud pits of South Carolina last week.

The man's appetite for attention, politics, vindication and public love is both gargantuan and insatiable. Can you say, "compulsion"?

The wonderful thing about Bill's recent antics is the comeuppance he got. His vilification was almost universal. Teddy Kennedy tried to reason with him, and then endorsed Barack Obama. Longtime defenders of the rascal from Hope gave up in disgust.

The awful thing about Bill's recent antics is that you know somewhere in Clintonia - that secret land inhabited by Bill, Hillary and their most trusted lieutenants - there is joy. Sure, Hillary lost South Carolina by the widest margin of any 2008 contest so far. But they got Obama into the gutter. They got Mr. High and Mighty riled like any other politician on the stump. They got race into the arena.

Mr. Boss took a dive in South Carolina so Mrs. Boss can go the distance on Super Tuesday.

You also know that the Clintons, as always, feel wronged; by the press, by Obama, by the Kennedys.

In Bill's now-famous scolding of reporters in South Carolina he insisted he didn't bring race into the race, then walked away saying, "Shame on you, shame on you." That's as sincere as his insincerity gets.

Bill Clinton's belly-fire reaches maximum heat when he feels shafted and up against a wall. Whether it's Gennifer Flowers, Newt Gingrich, Monica Lewinsky or Barack Obama who is the threat or enemy, Clinton's mojo bursts forth most when he feels wronged.

To think this will not happen when he is First Gentleman is nuts.

Democrats - the same ones who were disgusted by his anti-Obama stick work - can go back to pretending he will be an asset; the world's greatest strategist and also a terrific policy wonk. But this First Gentleman will become the news at some point, whether through cold calculation or pure appetite. He will be a force in American government.

It is legitimate for voters to factor this is into their thinking. It isn't sexist. It isn't a double standard. It is obvious and it is common sense. As Mitt Romney said, "The idea of Bill Clinton back in the White House with nothing to do is something I just can't imagine."

It is also obvious and common sense for voters to vote based on their assessments of the candidate's character. Our foremost scholar of presidential character was political scientist James David Barber, author of "The Presidential Character: Predicting Performance in the White House." Barber died in 2004, but I think he would instruct us to pay close attention to Bill in this campaign.

Barber categorized the character of leaders on two planes.

The activity-passivity plane describes the energy a leader brings to office, the drive to do, to accomplish, to forge and control; Lyndon Johnson was a whirling dervish every day while Calvin Coolidge napped most afternoons.

The positive-negative plane describes whether a leader enjoys power and responsibility, flourishes with it and has healthy fun as a leader. The Roosevelts and John Kennedy, for example, were active-positive presidents.

I think Barber would have tabbed Hillary Clinton an active-negative leader in the mold of Wilson, Johnson, Nixon and Carter. These are leaders who don't seem to take joy in power, who wear it with difficulty. They are driven both by a sense of duty but also by a striving to fill an ambition or emotional need, by perfectionist self-scolding and by a chip on the shoulder.

Somehow, the idea of the Bill Clinton we have seen over the past two weeks in the White House of an active-negative President Hillary Clinton seems highly flammable.

If you don't like this kind of psycho-babble, well, tough. The Clintons have committed themselves now to campaigning as a couple and Bill Clinton has committed to making news. A potential Clinton II administration must be assessed with that in mind. And with couples, you have two psychos to babble it, not just one.

Psycho-babble is one way most people sort out their votes. It is legitimate. And so is factoring in Bill Clinton.

E-mail questions, comments, complaints, arguments and ideas to Against the Grain. We will publish some of the interesting (and civil) ones, sometimes in edited form.
By Dick Meyer