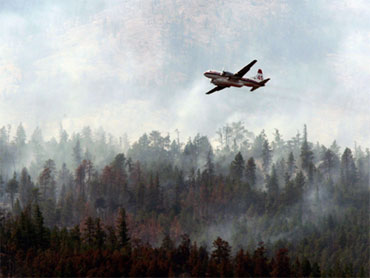 Two pilots were confirmed dead Sunday in the crash of a Canadian waterbombing plane that was fighting a forest fire.

The wildfire and steep terrain kept rescue workers from reaching the crash site after the plane went down Saturday night about 100 miles northeast of Vancouver.

The plane, carrying two pilots, was chartered by the provincial government from Conair in Abbotsford, British Columbia, to battle wildfires about 11 miles south of Lytton. Conair had a second plane shadowing the one that crashed and was able to pinpoint the location of the site.

The Royal Canadian Mounted Police confirmed the pilots' deaths, and said the plane was badly damaged after it crashed and burst into flames.

"We did survey the site last night and today to look at what was left of the aircraft," Moskaluk said Sunday.

"It's my understanding that there's not much left that's recognizable as a large fuselage aircraft," he said.

"There were no survivors from the accident," said Rick Pedersen, a spokesman for Conair.

The first rescue crew to reach the scene got within 500 meters of the crash site but had to turn back because a fire was raging through the steep terrain, Moskaluk said.

As of Saturday, 318 forest fires were burning across British Columbia, with the largest covering 10 square miles.

Last Thursday, a helicopter that was battling a blaze near Lillooet, about 210 miles northeast of Vancouver, crashed with two people on board. The 61-year-old pilot and the 27-year-old co-pilot were injured but survived.

Air tankers along with helicopters and heavy machinery were supporting as many as 1,000 firefighters on the ground. Residents were under evacuation orders or an alert in six parts of the Kamloops area and the Cariboo region.

Due to dry conditions across the region, a campfire ban extended to about 70 percent of the province, with violators facing potential fines and jail sentences.

The Transportation Safety Board of Canada was expected to send crash investigators to the site.