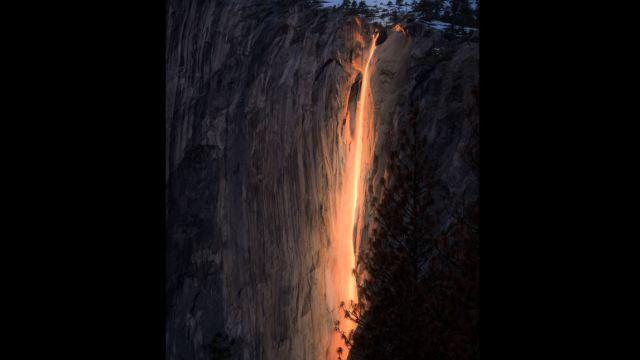 YOSEMITE — When the sun hits Horsetail Fall in Yosemite National Park at just the right angle, the falls light up as if on fire, attracting spectators from all over hoping to catch a glimpse of the phenomenon, CBS San Francisco reports.

Horsetail Fall is a small waterfall that flows over the eastern edge of El Capitan, the famous rock formation in Yosemite Valley.

For about two weeks in mid to late February, the setting sun creates a deep orange glow when it strikes the waterfall. That orange glow does not happen every year, as it depends on conditions like water flows, clouds and temperature.

The National Park Service captured the phenomenon in a video:

“[It’s] this thin ribbon of water just glowing orange with the cliff and the shade behind it, so it just seems like it has its own source of light — that there’s nothing else creating it. It’s really an amazing and beautiful thing to see,” photographer Michael Frye told the National Park Service.

Pictures of the fire show — from wildlife agencies, professional photographers, and amateur photographers — are lighting up the internet, as well: