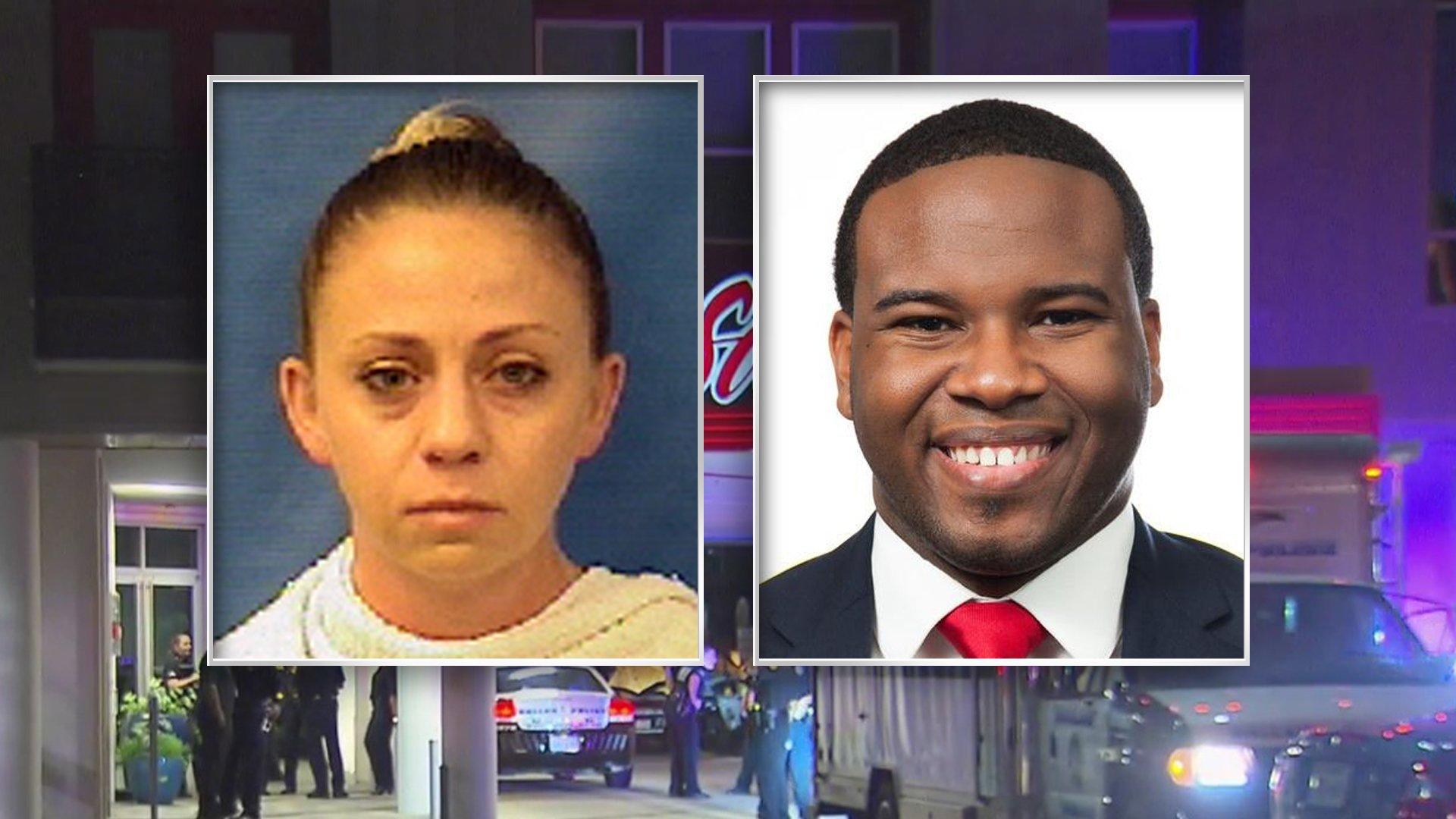 DALLAS -- The firing of a white Dallas police officer who fatally shot her black neighbor inside his own apartment was premature and unfair, an attorney for the officer says.

Robert Rogers, who represents the fired officer, Amber Guyger, said Monday night that Police Chief U. Renee Hall "bowed to pressure from anti-police groups and took action before all of the facts had been gathered and due process was afforded."

"That's not the way our system of justice should work," Rogers said in his first statement since the shooting.

He called the Sept. 6 shooting that left 26-year-old Botham Jean dead "a tragic mistake" and said "words can never express our sorrow for the pain suffered by those who knew and loved" Jean. Rogers added that Guyger "is completely devastated by what happened."

Guyger's firing came the same day that Jean was being buried in his Caribbean homeland. Hall dismissed the four-year veteran of the force during a hearing Monday, according to the Police Department.

The now-former officer is charged with manslaughter, and she was fired because of her arrest, according to the department.

Court records show Guyger said she thought she had encountered a burglar inside her own home. She was arrested three days later and is currently out on bond.

A statement from police said an internal investigation concluded that on Sept. 9, Guyger "engaged in adverse conduct when she was arrested for Manslaughter." Dallas police spokesman Sgt. Warren Mitchell later said that when an officer has been arrested for a crime, "adverse conduct" is often cited in the officer's termination.

One of the attorneys for Jean's family, Lee Merritt, said Jean was being buried Monday in St. Lucia.

The family's attorneys, along with protesters, had been calling for Guyger to be fired since the shooting. In a statement, the attorneys said they see the termination as an initial victory.

"However, we are committed to seeing through the next steps of the process of a proper murder indictment, conviction and appropriate sentencing," they said in the statement.

CBS Dallas says the statement also called the firing "bittersweet for Botham's family. While nothing can bring him back, DPD's firing of Guyger is the first step towards justice for Botham Shem Jean."

The station adds that a civil rights wrongful death lawsuit is being prepared against Guyger and the city of Dallas.

Dallas County District Attorney Faith Johnson has said the case will be presented to a grand jury, which could decide a more serious charge than manslaughter.

During a conference call with Jean's parents and their lawyers on Sunday, Hall reported she intended to fire Guyger and explained the delay in the action, according to the family's attorneys in their statement.

Days before the firing, Hall said in a statement that she had not taken action against Guyger because she did not want to interfere with the ongoing criminal investigation.

There are conflicting narratives over what led up to the shooting.

Guyger told investigators she had just ended a shift when she returned in uniform to the South Side Flats apartment complex where she lived.

She said when she put her key in the apartment door, which was unlocked and slightly ajar, it opened, according to the affidavit. Inside, the lights were off, and she saw a figure in the darkness that cast a large silhouette across the room, according to the officer's account.

Guyger said she concluded her apartment was being burglarized and gave verbal commands to the person, who ignored them. The affidavit said she then drew her weapon and fired twice.

She called 911. Asked where she was, she returned to the front door to see she was in the wrong unit, according to the affidavit. The 911 tapes have not been released.

But according to an affidavit for a search warrant, Jean "confronted the officer at the door."

After the shooting, Guyger's blood was drawn to be tested for alcohol and drugs, according to Hall. Authorities have not released results.

Merritt has called into question Guyger's narrative. The lawyer has said that two independent witnesses have told him they heard knocking on the door in the hallway before the shooting.

He said one witness reported hearing a woman's voice saying, "Let me in! Let me in!"

Dallas Mayor Mike Rawlings said he agrees with the decision to fire Guyger.

"The swift termination of any officer who engages in misconduct that leads to the loss of innocent life is essential if the Dallas Police Department is to gain and maintain the public trust," Rawlings said in a statement.

Guyger also attended the University of Texas at Arlington in fall of 2012 and spring of 2013, said university spokeswoman Sana Syed. Guyger's intended major was criminology and criminal justice, Syed said.

Dallas police say Guyger was hired in November 2013 and state law enforcement records show she was appointed as a peace officer in May 2014.

Sgt. Michael Mata, president of the Dallas Police Association, said Guyger more recently worked on a team tasked with arresting some of the city's most violent offenders. He said the association - Dallas' largest police employee organization - will be paying Guyger's legal fees.