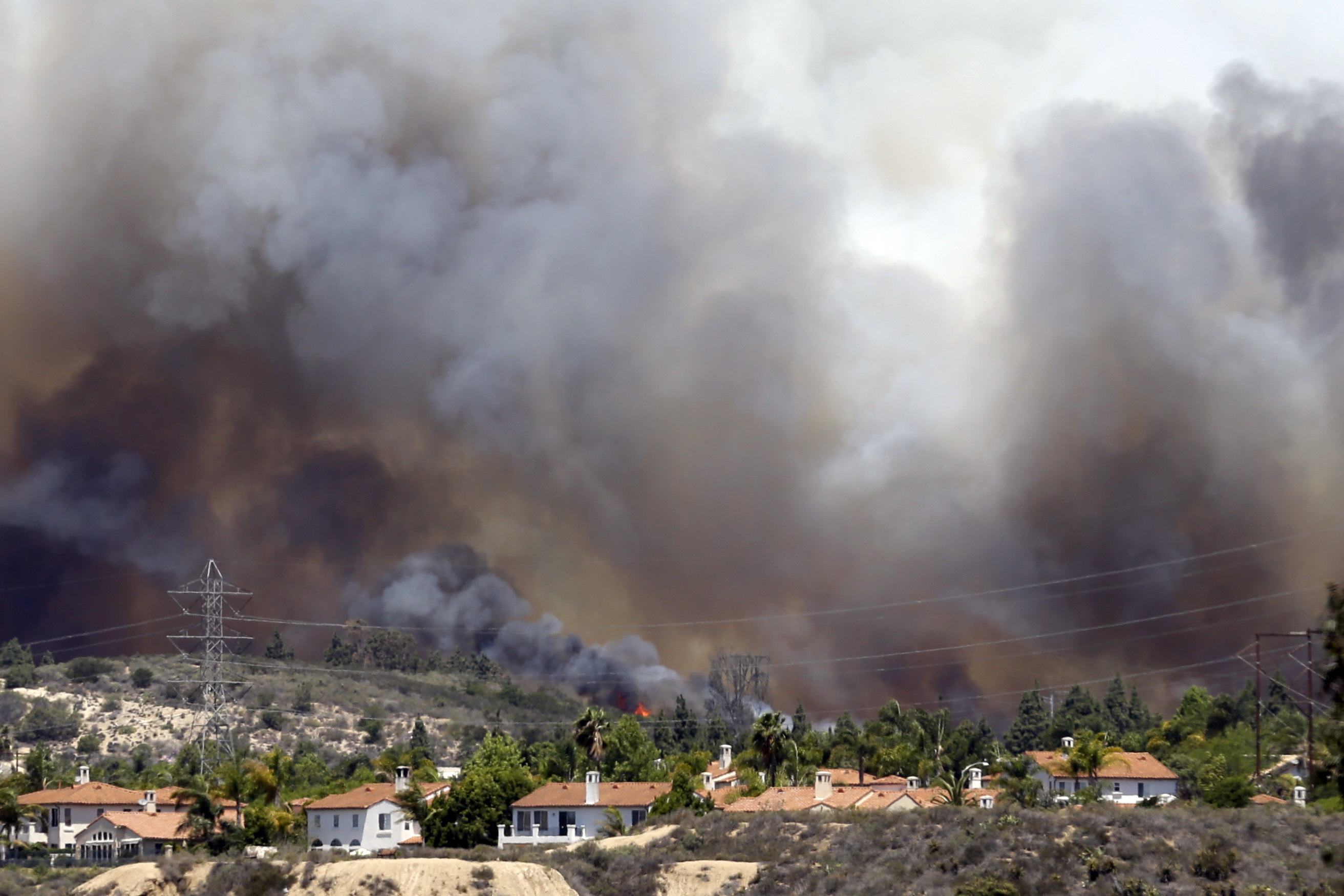 SAN DIEGO -- A fast-moving wildfire ignited hillsides and destroyed more than two dozen homes Wednesday in the coastal city of Carlsbad as weary firefighters scrambled to control multiple blazes in Southern California on the second day of a sweltering heat wave.

Flames were shooting up along canyon ridges as thick black smoke darkened blue skies over the small city, about 30 miles north of San Diego, known for its Legoland California amusement park that was closed Wednesday because of a power outage.

Mandatory evacuations were in progress, and more than 11,000 notices were sent to homes and businesses, city officials said.

Local TV broadcasts showed the blaze engulfing suburban-style homes with manicured lawns. State fire Capt. Mike Moehler told KCAL-TV that all of the homes were in the same neighborhood and engines were being called in from across the region to help.

"We've never had a problem with this before," one resident, Greg Saska, told CBS News as his family's home burned. "Usually the fire department comes and takes care of it, but this time they were not as quick and efficient as they could be."

The blaze was one of several wildfires that firefighters in San Diego County were battling amid hot, dry and windy conditions.

Offshore wind means some coastal communities have higher temperatures than inland and coupled with low humidity, "it's just, unfortunately, a recipe for a large fire and that's what we're seeing right now," Moehler said.

Another wildfire further north forced the evacuation of residents in military housing at Camp Pendleton, and the closure of an elementary school on the Marine Corps base. CBS affiliate KFMB reported that military and civilian crews were battling the flames on the ground and aboard firefighting aircraft.

Marine Corps officials said military fire crews were fighting a blaze that started at about 9:45 a.m. at the Naval Weapons Station in Fallbrook, north of San Diego, and had spread to more than 100 acres. Residents in military housing have been ordered to evacuate. Students at Mary Fay Pendleton Elementary School, located on base, were also ordered to go home.

A third fire spread from a burning vehicle on coastal Interstate 5 to roadside brush near the northwest corner of the Marine base.

Much of Southern California is covered by a blanket of tinder dry vegetation after 28 months of severe drought.

California has seen more than 1300 fires since January, twice as many as usual, and the driest months are still ahead.

Earlier Wednesday, authorities reported 25 percent containment of a 2.42-square-mile fire that had forced thousands of people to flee the Rancho Bernardo area of San Diego the day before.

"There's a lot of work to be done today still," Rancho Santa Fe Fire Chief Tony Michel told reporters Wednesday. "There are a lot of hotspots throughout the whole area of the fire. Crews will be working diligently to put those fires out. The winds are going to be a problem."

In Santa Barbara County, north of Los Angeles, a 600-acre blaze near the city of Lompoc was 50 percent contained

Meanwhile in the mountains of southwestern New Mexico, crews battling a 9-square mile wildfire are preparing for high winds this week. And in the Texas Panhandle, about 2,100 residents have started returning to their homes after wildfire burned at least 156 structures. The fire in the Fritch area was 85 percent contained Wednesday.