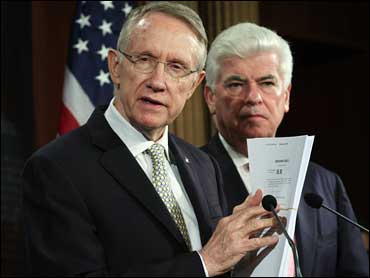 The Bush administration and Congress anxiously revived negotiations Friday on a $700 billion financial bailout, one day after the largest bank collapse in U.S. history provided a brutal reminder of the risks of failure. Democrats talked optimistically of agreement by the end of the weekend.

"I'm convinced that by Sunday we will have an agreement that people can understand on this bill," predicted Massachusetts Rep. Barney Frank, a key Democrat in eight days of up-and-down talks designed to stave off an economic disaster.

House Speaker Nancy Pelosi added that "progress is being made," although the day came and went without senior lawmakers from both parties sitting down together.

Neither she nor Frank divulged details at a late-afternoon news conference in the Capitol, though there was word of one fresh Democratic concession.

Pelosi told fellow Democrats during a closed-door meeting that the idea of letting judges rewrite mortgages to help bankrupt homeowners avoid foreclosure won't be a part of the emergency legislation. That provision, pushed by several Democrats, would be a deal-breaker for Republicans whose votes are needed to pass the measure, she said, according to lawmakers at the meeting.

Democrats and Bush administration officials also said they were willing to include House Republicans' idea of having the government insure distressed mortgages - but only as an option, rather than a replacement for the administration's more sweeping approach.

All sides continue to warn of severe economic aftershocks if Congress fails to pass a bailout bill, but the deal hinges on whether the President Bush can turn back a revolt by members of his own party, reports CBS News correspondent Bob Orr.

Democratic and Republican staff aides met into the night on Capitol Hill. They were going line by line through legislative proposals in an attempt to clear the way for lawmakers to bargain over the weekend even as presidential contenders John McCain and Barack Obama agreed during their presidential debate Friday night that Congress must act soon.

Asked directly whether he intends to vote for a rescue plan taking shape in Congress, McCain said, "I hope so. ... sure."

"We haven't seen the language yet," Obama said. "I do think there is constructive work being done."

Meanwhile, new details emerged of a remarkably tumultuous White House meeting on Thursday. With the session breaking up in disarray, according to two participants, President Bush issued an appeal, saying, "Can't we just all go out and say things are OK?" The group around the table, congressional leaders as well as McCain and Obama, spurned the presidential request for a publicly united front.

Earlier in the White House meeting, Democrats peppered House Republican leader John Boehner of Ohio with questions about the details of an alternative he was backing. "I don't know what the hell they are," Bush said at one point," recalled one person who was in the room. All the participants spoke on condition of anonymity, saying the meeting was private.

Bush sought to coax the talks back to life on Friday, prodding lawmakers in a morning appearance to "rise to the occasion" - and quickly.

In a sign of progress, House Republicans dispatched their second-ranking leader, Rep. Roy Blunt of Missouri, to join the talks after their objections to an emerging compromise had brought negotiations to a standstill the day before. They demanded "serious consideration" for their plan.

"We want to see a deal happen - there's no doubt about it," said Rep. Eric Cantor, R-Va.

The legislation the administration is promoting would allow the government to buy bad mortgages and other sour assets held by investors, most of them financial companies. That should make those companies more inclined to lend and lift a major weight off the national economy that is already sputtering.

But a significant number of lawmakers, including many House conservatives, say they're against such heavy federal intervention. Under the GOP plan, the government would insure the distressed securities rather than buy them. Tax breaks would provide additional incentives to invest.

"I think what we're expecting in these negotiations is looking for ways to really protect taxpayers and to make sure that Wall Street pays its fair share of this problem," House Minority Leader John Boehner told CBS Evening News anchor Katie Couric. "I just don't think it's fair to take $700 billion of taxpayer funds, put them on the line without Wall Street also stepping up to me solve this problem."

Key Democrats were just as adamant about not giving the president too much latitude in negotiations.

"I can only tell you what we're being told by others, that if we don't step up, these problems we're seeing in our economy could go far worse," Sen. Chris Dodd, chairman of the Senate Banking Committee told Couric. "I'm not going to give this president as blank check for $700 billion without some conditionality on it. I won't do that and I don't think my colleagues will either."

The crisis was hardly limited to the U.S.

Bush held a lengthy Oval Office meeting with British Prime Minister Gordon Brown that focused on how the problems were spreading, then said, "I told him the plan is big enough to make a difference, and I believe it will be passed."

Presidential politics weighed heavily and unpredictably on the election-season effort to stave off a full-blown economic crisis.

After announcing earlier in the week he would suspend his campaign and return to the capital until there was an agreement, Republican McCain abruptly reversed course and departed for Friday night's debate with Democratic rival Obama.

There were fresh signs of urgency at both the White House and the Capitol, one day after the rancorous White House session and the collapse of Washington Mutual, the largest failure in U.S. banking history. The Seattle-based institution had invested heavily in the now-moribund mortgage market.

Still, the Dow Jones industrials rose 121 points for the day as investors anticipated a weekend agreement.

In days of negotiations, the administration has accepted demands from lawmakers to give Congress considerable authority to oversee the bailout and require that the government try to renegotiate the bad mortgages it acquires so more borrowers could keep their homes. Paulson also relented to requests to limit the severance packages that corporate executives can receive from firms benefiting from the government bailout.

In addition, rather than provide $700 billion up front, as Paulson initially requested, Congress would approve the funds in stages. Under one approach, $250 billion would be made available at once, with the president able to certify the need for an additional $100 billion on his own authority. The final $350 billion would become available with a second presidential certification, although this time Congress would have authority to block it.

Any compromise is also expected to require the government to obtain partial ownership of any company it invests in.

Democrats, too, signaled they were ready to jettison some of their priorities.

Frank indicated they might ultimately drop a requirement that a portion of any profits from the rescue be funneled to a fund to build housing for low-income people. That mandate, deeply unpopular with Republicans, "is not an essential," Frank said.

While Democrats control a majority of both the House and Senate, their leaders have made it clear they will not force their rank and file to vote without Republican support on a bailout advanced by an unpopular president on an unwilling public.

In an Associated Press-Knowledge Networks poll, only 30 percent of those surveyed expressed support for Bush's package. Forty-five percent were opposed, with 25 percent undecided. The survey was conducted Thursday and had a margin of error or plus or minus 3.8 percentage points. It was conducted over the Internet by Knowledge Networks, which initially contacted people using traditional telephone polling methods and followed with online interviews.

Aides to lawmakers in both parties say telephone calls from constituents are running heavily against the bailout - in some cases nearly 100-1 against, making the vote a potentially tricky one for a candidate in a competitive race.

Sen. Richard Shelby, R-Ala., and the ranking member of the Senate Banking Committee, called the Paulson proposal "badly structured," and backed it up with the opinions of over 200 economists who said the administration proposal to take on the bad debt of financial institutions is the wrong way to go.

"We need to do something to put liquidity in the market," he told Early Show anchor Maggie Rodriguez, but added, "If we adopt the Paulson plan or something close to it, we're making a big mistake."

Frank, who chairs the House Financial Services Committee, said there was a compromise agreed to by lawmakers, but that fell apart. "I signed on for a lot of jobs, [but] I didn't know I was going to be the referee for the independent Republican Civil War," Frank told Rodriguez.

Frank even suggested that the Republican infighting will only make the financial crisis worse by refusing to heed the warnings of imminent disaster by the President's top economic advisors. "Even if it hadn't been true, and I think it probably was, they make it true."

Frank said he was surprised that late yesterday the House Republicans come up with an entirely new plan, which he dubbed "an ambush plan." Frank blasted the Republicans who faced Secretary Paulson at committee hearings earlier this week and never brought their proposal to the table. "None of the Republicans now backing this new plan even mentioned it to him, because they knew he would say it wouldn't work," Frank said.

Frank conceded that the initial Paulson proposal had problems, which he and other Democrats sought to fix: "Some of the points Senator Shelby made we were also making. We wanted to amend the bill to provide some real needs to mortgage holders. I'd like to further amend the bankruptcy law to do it. They are still fighting over it. We want to curb some of the extreme authority the Secretary has. We want to put some language in there to protect the taxpayers but we did feel we had to negotiate in this framework."

Shelby said, however, that he was looking at neither President Bush nor Senator McCain for leadership in the crisis. "I'm looking at the economists that know more about the economy than Senator McCain and Senator Obama and President Bush and me and anybody else that I know of," he said. "They say we need to take some time - I don't mean a lot of time - and look at another structure or plan.

"I believe they're right."