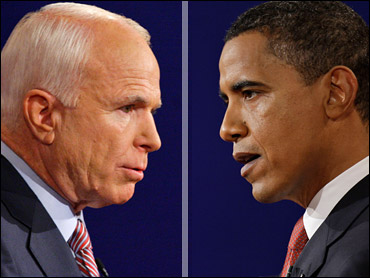 Barack Obama and John McCain clashed over the financial crisis and foreign policy in a wide-ranging presidential debate Friday night at the University of Mississippi.

Neither man delivered a knockout blow and neither man made a major gaffe during the 90-minute encounter.

"Having been asked to engage one another directly by the moderator, both candidates complied, with vigor," said CBSNews.com senior political editor Vaughn Ververs. "On issue after issue, McCain went back to familiar territory, casting himself as the experienced hand in contrast to Obama's youth something that could work against the Republican if this election is about change." (Read Ververs' analysis of the Debate)

The financial crisis initially took center stage with a spirited exchange between the two men. Moderator Jim Lehrer then moved on to foreign policy and national security issues.

Obama said his Republican rival has been a loyal supporter of the unpopular president across the past eight years, adding that the current economic crisis is "a final verdict on eight years of failed economic policies promoted by President Bush and supported by Sen. McCain."

"And we can't afford another four," he added moments later.

The most dramatic exchange came over Iraq.

McCain accused his younger rival of an "incredible thing of voting to cut off funds for troops in Iraq and Afghanistan," a reference to legislation that cleared the Senate more than a year ago.

Obama disputed that, saying he had opposed funding in a bill that presented a "blank check" to the Pentagon while McCain had opposed money in legislation that included a timetable for troop withdrawal.

Obama opposed the invasion of Iraq in 2002, before he was a member of Congress, while McCain voted in the Senate to authorize the war.

"You were wrong" on Iraq, Obama repeated three times in succession. "John, you like to pretend the war began in 2007."

McCain replied that Obama has refused to acknowledge the success of the troop buildup in Iraq that McCain recommended and Bush announced more than a year ago.

The 47-year-old Obama is seeking to become the nation's first black president. McCain, 72, is hoping to become the oldest first-term chief executive in history - and he made a few jokes at his own expense.

"I've been around a while," he said at one point. "Were you afraid I couldn't hear him?" he said at another after moderator Jim Lehrer repeated a phrase.

But he also sought to turn his age into an advantage. "There are some advantages to experience and knowledge and judgment," he said. "And I honestly don't believe that Sen. Obama has the knowledge or experience" to serve as commander in chief.

McCain also made a point of declaring his independence from Mr. Bush. "I have opposed the president on spending, on climate change, on torture of prisoners, on Guantanamo Bay, on a long - on the way that the Iraq War was conducted. I have a long record and the American people know me very well ... a maverick of the Senate."

It was a debate that almost didn't happen. McCain decided a few hours in advance to attend, two days after announcing he would try to have the event rescheduled if Congress had not reached an agreement on an economic bailout to deal with the crisis now gripping Wall Street.

The two men were pointed but polite, although at least once McCain sought to depict his rival as naive on foreign policy. That was in response to Obama's statement that it might become necessary to send U.S. troops across the Pakistani border to pursue terrorists.

"You don't say that out loud," retorted McCain. "If you have to do things, you do things."

He also criticized Obama for having said he would sit down without precondition with Iranian President Mahmoud Ahmadinejad.

"So let me get this right, we sit down with Ahmadinejad and he says 'we're going to wipe Israel off the face of the earth' and we say, 'no you're not.' Oh please," McCain said.

He also seemed eager to demonstrate his knowledge of foreign policy, recalling the names of three former leaders of the Soviet Union in one sentence.

"If McCain's mission was to come out in this debate and demonstrate his command of foreign policy while putting his opponent on the defensive, he succeeded," said CBSNews.com's Ververs. "And if Obama's goal was to rise to that and demonstrate he was up to the challenge, he met that as well."

The two men also differed on federal spending. McCain said a freeze on most government spending was worth considering, except for veterans, defense and "some other vital issues."

Obama said the problem with that was that some programs needed more money. He mentioned early childhood education as an example.

Moderator Lehrer's opening question concerned the economic crisis. While neither man committed to supporting bailout legislation taking shape in Congress, they readily agreed lawmakers must take action to prevent millions of Americans from losing their jobs and their homes.

Both also said they were pleased that lawmakers in both parties were negotiating on a compromise.

McCain jabbed at Obama, who he said has requested millions of dollars in pork barrel spending, including some after he began running for president.

As he does frequently while campaigning, the Republican vowed to veto any lawmaker's pork barrel project that reaches his desk in the White House. "You will know their names and I will make them famous," he said.

Immediately after the debate, CBS News interviewed a nationally representative sample of nearly 500 debate watchers assembled by Knowledge Networks who were "uncommitted voters" - voters who are either undecided about who to vote for or who say they could still change their minds. Thirty-nine percent of these uncommitted debate watchers said Obama won the debate. Twenty-four percent said McCain won, and another 37 percent thought it was a tie.

But while 66 percent think Obama would make the right decisions about the economy, 56 percent think McCain would do so about Iraq. (Read more from the poll)

The two presidential hopefuls are scheduled to debate twice more, at Belmont University in Nashville on Oct. 7 and at Hofstra University in Hempsted, N.Y., on Oct. 15. Vice presidential contenders Sarah Palin and Joe Biden are to square off in a single debate Oct. 2 at Washington University in St. Louis.