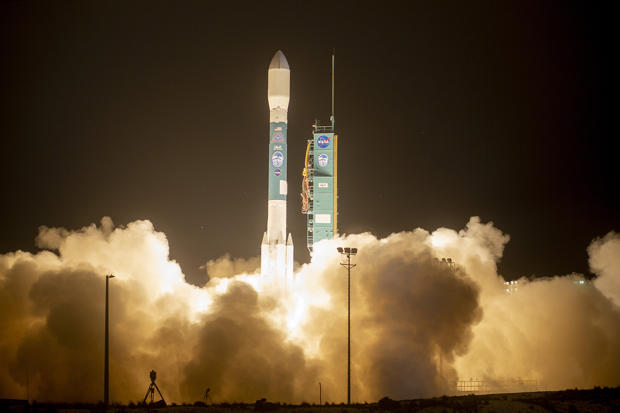 Ending a 30-year run as one of America's most successful rockets, a United Launch Alliance's 155th and final Delta 2 roared to life for the last time Saturday carrying a $1 billion NASA satellite into orbit to measure the thickness and extent of polar ice sheets, changes in sea level and the height of forest canopies and clouds.

The ICESat-2 satellite -- the acronym stands for Ice, Cloud and land Elevation Satellite 2 -- is the most sophisticated ice-monitoring spacecraft ever launched, equipped with advanced electronics and a laser that will fire 10,000 pulses per second at the ground below and then capture the faint reflections.

Timing the departure and arrival times of returning photons to within a billionth of a second, the satellite will be able to determine the thickness of ice below the spacecraft, giving scientists insights into how ice sheets change over time and how the loss of ice due to global warming and other factors might affect sea levels around the world.

The mission will build on the results of an earlier, less powerful ICESat mission and a more limited NASA aircraft campaign known as IceBridge, all aimed at monitoring the planet's ice inventory over decadal time scales.

"In the half a second it takes a person to blink, ICESat-2 will collect 5,000 elevation measurements in each of its six beams," said Tom Neumann, deputy project scientist for the ICESat-2 mission "Every minute of every hour of every day for the next three years.

"And that incredible timing precision will allow us to measure elevation changes across the entire ice sheet to less than a centimeter. And this is important, since an elevation change of just a centimeter over an ice sheet the size of Antarctica represents a tremendous amount of water, either gains to or loss from the ice sheet - 140 gigatons worth."

The Delta 2's RS-27A main engine burst to life at 6:02 a.m. PDT (GMT-7; 9:02 a.m. EDT) following instants later by ignition of four strap-on solid-fuel boosters. The slender rocket quickly climbed away from its firing stand at Vandenberg Air Force Base, Calif., shooting away to the south.

Liftoff was delayed 16 minutes because of a minor technical glitch, but the final moments of the countdown ticked smoothly to zero and the rocket leaped skyward atop a brilliant jet of flame from the strap-on boosters.

The launching marked the end of an era for the Delta 2, a rocket that debuted in February 1989 when it launched the first operational Global Positioning System satellite from Cape Canaveral. Since then, the rocket chalked up 153 successful flights going into Saturday's mission. It's only outright failure occurred 100 launches ago.

"If you think about that, the Delta 2 vehicle has touched the lives of probably every single person in America in the technology it has enabled over its 30 years," said Scott Messer, manager of NASA programs for United Launch Alliance. "So it's been a very, very prominent part of space history."

But the star of the show was ICESat-2, built to extend observations originally carried out by the less-powerful ICESat satellite and, more recently, by an aircraft-based gap-filler program known as IceBridge.

"One of the most important things for us as scientists trying to tie changes in the ice to changes in the Earth system is length of record," said Tom Wagner, "cryosphere" program scientist at NASA Headquarters.

"By having ICESat, IceBridge and ICESat-2, we're going to be able to look at the decadal time scale and look at how larger variations in the Earth systems are affecting the ice so we can do a better job with forecasts and just also understand the changes that are occurring now."

The 3,340-pound satellite, built by Northrup Grumman, is equipped with a single instrument known as ATLAS, the Advanced Topographic Laser Altimeter System, that was developed at NASA's Goddard Space Flight Center.

ATLAS includes state-of-the-art electronics that can turn a laser on and off thousands of times per second and a large telescope that can detect the handful of laser light photons that bounce off the surface and return to the satellite's 300-mile-high orbit.

By measuring the time it takes the photons to complete a round trip -- about 3.3 thousandths of a second -- scientists can calculate how far away an ice surface is, compare it to surrounding areas and determine its relative height and thickness. Over time, researchers can see how those levels are changing.

"ATLAS has the ability to time tag a single photon to billionth of a second accuracy, said Donya Douglas-Bradshaw, the ATLAS instrument manager at NASA's Goddard Space Flight Center. "This precision allows the instrument to detect annual changes in ice elevation on the order of a half a centimeter."

ICESat-2 will orbit Earth's poles, allowing ATLAS to cover the entire planet as it rotates below. Every 91 days -- 1,387 orbits -- ICESat-2 will return to its starting point and begin repeating its initial observations.

"This allows the mission to look at the same piece of Earth in each of the four seasons, enabling scientists to use that data to characterize the changes that they're observing," Neumann said.

Along with launching ICESat-2, the Delta 2's second stage also carried four small cubesats developed by university researchers. They will study space weather, how electrons are liberated from the Van Allen radiation belts and experimental technology that could prove useful for future spacecraft.

How to tell if your Facebook has been hacked

Replacing humans: Robots among us