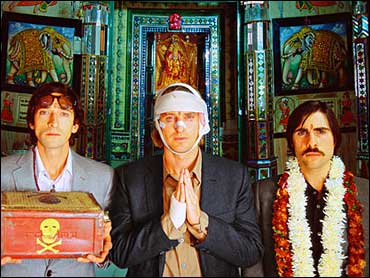 Though the NYFF has always put forth a highly international slate of selections, this year's fest, the 45th annual, features 11 movies from American filmmakers out of a total 28.

Joel and Ethan Coen's adaptation of Cormac McCarthy "No Country for Old Men" is the festival's centerpiece.

Interactive: Film Festivals Around The World

Films presented at the festival are not in competition, but are meant to "expose people to the broadest and best that contemporary cinema has to offer," said Richard Pena, the Film Society of Lincoln Center chairman and program director.

"The Darjeeling Limited" stars Owen Wilson, Adrien Brody and Jason Schwartzman, but its North American premiere (which coincides with Friday's opening night) has been obscured by coverage devoted to Wilson's attempted suicide in late August. Anderson has said Wilson is doing well and recuperating.

As it has at other recent festivals, the movie is preceded by a short film by Anderson titled "Hotel Chevalier." A kind of prologue to "Darjeeling," it stars Natalie Portman and Schwartzman as former lovers who meet at a Paris Hotel. Anderson hopes to add it to the movie's theatrical release a few weeks into
its run.

"It's especially fun that both Noah and myself have movies at the festival," Anderson, a New York resident, said Wednesday, referring to his friend and collaborator Baumbach.

2"Before the Devil Knows You're Dead" is Lumet's first film at the NYFF since "Fail-Safe" played there in 1964, a surprising bit of trivia for a director so synonymous with New York, and more specifically, the Upper West Side. Alluding to one of the neighborhood's famous restaurants, Lumet proudly proclaims he's the "son of Zabar."

Lumet told The Associated Press that his long absence from the festival, during which he made "Network," "Dog Day Afternoon" and "The Verdict," was more a matter of timing and studio release strategies that didn't include festivals.

"When I see fresh talent coming along with studio support, with private support ... bless them all," said Lumet. "I'm thrilled at the number of New York directors that are at the festival, not out of any parochial sense, just out of the fact that it's a different kind of energy if it hasn't come out of the studio system."

Lumet's film, which stars Ethan Hawke and Philip Seymour Hoffman as two brothers who attempt to rob their parents' jewelry store, has been hailed as a return to form for the 83-year-old director.

Pena does not believe the Tribeca Film Festival, which had its sixth annual fest earlier this year, has affected the NYFF, but he acknowledges the overall glut of festivals has. "It certainly has robbed the New York Film Festival of its specialness in a way," Pena said.

Two European heavyweights are also returning again. French director Eric Rohmer appears for the 13th time with "The Romance of Astree and Celadon," and Claude Chabrol brings "A Girl Cut in Two," his ninth film at the festival.

Taiwanese director Hou Hsiao-hsien, who Pena calls a modern-day
Michelangelo Antonioni, will show "Flight of the Red Balloon," his 10th film at the festival.

But this year's festival, which runs through Oct. 14, remains most dominated by the Yanks. While pessimism often prevails over the commercialism of Hollywood and its affect on the country's film culture, for at last a few weeks, all is well in American cinema.

"It really does show that both among the most established directors, the kind of middle-range directors and even young directors starting out, there's a lot of creativity," said Pena, who's in his 20th year as the festival's program director.