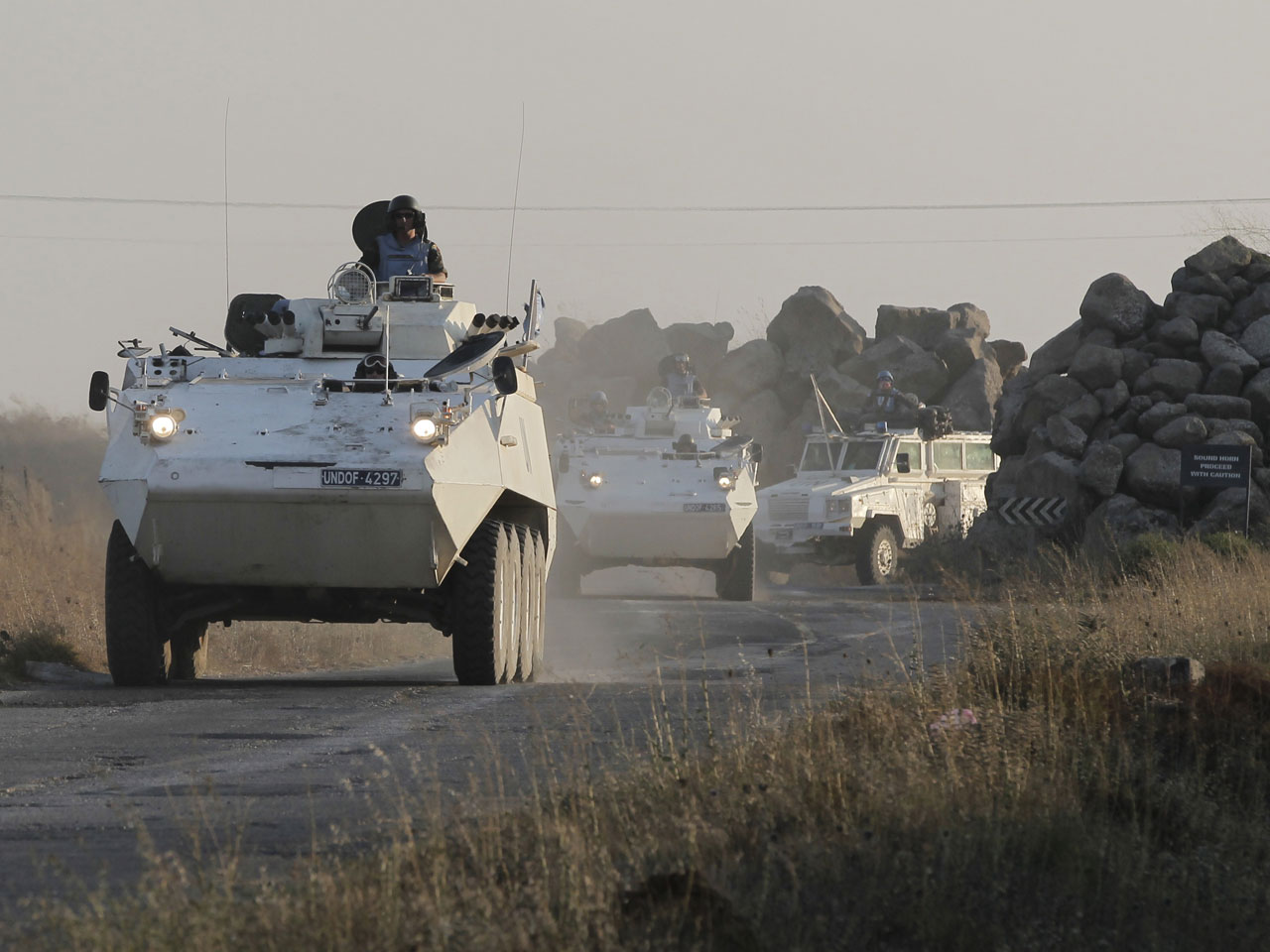 MANILA, Philippines - Under cover of darkness, 40 Filipino peacekeepers made a daring escape after being surrounded and under fire for seven hours by Syrian rebels in the Golan Heights, Philippine officials said Sunday, leaving 44 Fijian troops still in the hands of the al Qaeda-linked insurgents.

The peacekeepers became trapped after Syrian rebels entered the U.N.-patrolled buffer zone between Syria and Israel this past week, seizing 44 Fijian soldiers and demanding that their Filipino colleagues surrender. The Filipinos, occupying two U.N. encampments, refused and fought the rebels Saturday. The first group of 35 peacekeepers was then successfully escorted out of a U.N. encampment in Breiqa by Irish and Filipino forces on board armored vehicles.

The remaining 40 peacekeepers were besieged at the second encampment, called Rwihana, by more than 100 gunmen who rammed the camp's gates with their trucks and fired mortar rounds. The Filipinos returned fire in self-defense, Philippine military officials said.

At one point, Syrian government forces fired artillery rounds from a distance to prevent the Filipino peacekeepers from being overwhelmed, said Col. Roberto Ancan, a Philippine military official who helped monitor the tense standoff from the Philippine capital, Manila, and mobilize support for the besieged troops.

"Although they were surrounded and outnumbered, they held their ground for seven hours," Catapang said in a news conference in Manila, adding that there were no Filipino casualties. "We commend our soldiers for exhibiting resolve even while under heavy fire."

As night fell and a cease-fire took hold, the 40 Filipinos fled with their weapons, traveling across the chilly hills for nearly two hours before meeting up with other U.N. forces, who escorted them to safety early Sunday, Philippine officials said.

"If they held their ground, they could have been massacred because they were already running low on ammunition," Defense Secretary Voltaire Gazmin told The Associated Press. "So we discussed with them the option of escape and evasion."

Philippine military officials believed there may have been rebel casualties in the fighting in Rwihana. President Benigno Aquino III, Gazmin said, praised efforts that brought the Filipino peacekeepers to safety but wanted to be sure they could not be targeted by rebel retaliatory attacks.

In New York, the United Nations Disengagement Observer Force, or UNDOF, whose mission is to monitor a 1974 disengagement in the Golan Heights between Israel and Syria, reported that shortly after midnight local time, during a cease-fire agreed with the armed elements, all 40 Filipino peacekeepers left their position and "arrived in a safe location one hour later."

The Filipinos escaped during the cease-fire because they refused to agree to surrender as the insurgents demanded, Philippine military spokesman Lt. Col. Ramon Zagala said.

Another group of 32 Filipino troops that had been trapped at a nearby encampment were extracted on Saturday morning with the help of Irish peacekeepers, the U.N. said.

The clashes erupted after Syrian rebel groups - including al Qaeda's Syrian affiliate, the Nusra Front - overran the Quneitra crossing on the frontier between Syrian- and Israeli-controlled parts of the Golan on Wednesday. A day later, Nusra Front fighters seized 44 Fijian peacekeepers.

In a statement posted on militant websites Sunday, the Nusra Front confirmed that it had seized the Fijians, and posted a photo showing what it said were the captured Fijians in their military uniforms along with 45 identification cards. The group said the men "are in a safe place and in good health, and everything they need in terms of food and medicine is given to them."

The statement mentioned no demands or conditions for the peacekeepers' release.

U.N. Secretary-General Ban Ki-moon on Sunday ensured that the United Nations was doing its utmost to obtain the unconditional and immediate release of the Fijian peacekeepers detained in Golan Heights.

The Nusra Front accused the U.N. of doing nothing to help the Syrian people since the uprising against President Bashar Assad began in March 2011. It said the Fijians were seized in retaliation for the U.N.'s ignoring "the daily shedding of the Muslims' blood in Syria" and even colluding with Assad's army "to facilitate its movement to strike the vulnerable Muslims" through a buffer zone in the Golan Heights.

The U.N. mission has 1,223 troops from six countries: Fiji, India, Ireland, Nepal, Netherlands and the Philippines. A number of countries have withdrawn their peacekeepers due to the escalating violence.

Philippine officials said Filipino forces would remain in Golan until their mission ends in October and not withdraw prematurely following the rebel attacks and the capture of the Fijian peacekeepers.

Both U.N. Secretary-General Ban Ki-moon and the Security Council strongly condemned Saturday's attack on the peacekeepers' positions and the ongoing detention of the Fijian peacekeepers.

The Nusra Front has recently seized hostages to exchange for prisoners detained in Syria and Lebanon.

The Nusra Front and other militants still hold some two dozen Lebanese soldiers and police that they kidnapped in the town of Arsal on Lebanon's border with Syria.