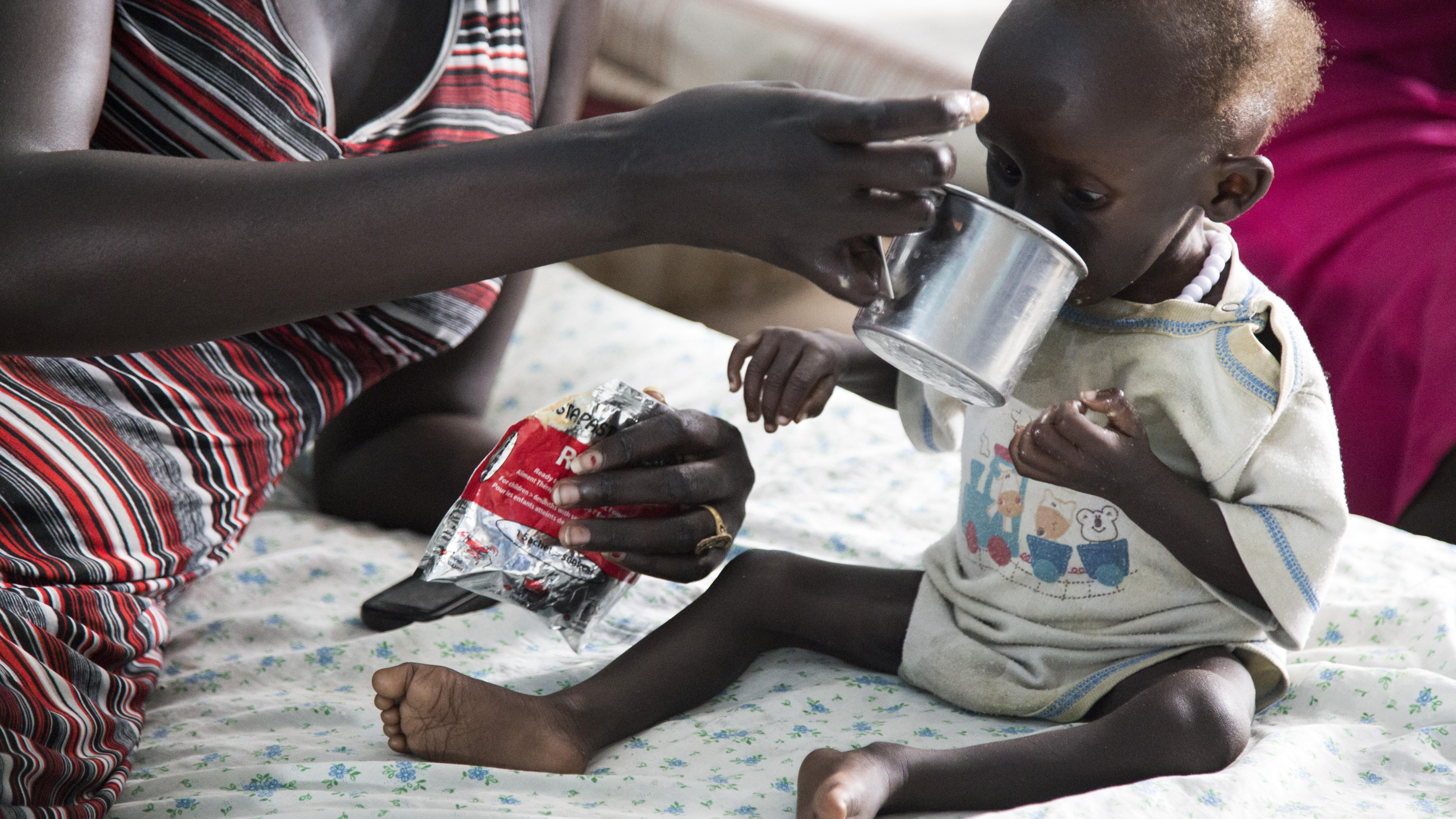 A rare famine emergency has been declared in the youngest nation on Earth. South Sudan, in East Africa, was brought into the world, in 2011, with the help of the United States.  But it’s one of the world’s least developed countries and civil war has left it destitute. Five million people don’t know where their next meal is coming from and of them, 100,000 are facing death. Holding off a catastrophe is the mission of the UN’s World Food Programme. The WFP was an American idea, created in 1961, and the U.S. is still the largest donor. Now WFP has launched one of its largest rescues ever but in South Sudan too many people are fighting for life.

Josephine is seven and down to 24 pounds. Hunger left her at the mercy of disease. And now she’s being consumed by tuberculosis. This is why TB used to be called consumption. Josephine’s mother shooed away the 90 degrees, waiting to be seen by Dr. Meroni Abraham.

Scott Pelley: How long would a child be in this hospital?

Meroni Abraham: Typically, a child will be staying between two to three weeks.

Scott Pelley: Why so long?

Solid food could kill them. Nutrition must be reintroduced through milk-based formulas. The twins were four-and-a-half pounds at birth, and even after days here, they were still less than half their normal weight.

Scott Pelley: Which would be six and a half pounds or so?

The clinic, in South Sudan’s capital, is operated by an American charity, the International Medical Corps. Dr. Abraham was one of two doctors for up to 55,000 people, compressed, into squalid camps, stalked by disease—a place so much better than where they came from.

We headed to the violent region Josephine escaped. In a nation as big as Texas, in one of the world’s largest swamps, there is only one paved road outside the capitol. In the wet season, people in half of South Sudan are marooned.

Sudan was Africa’s largest nation, ruled from Khartoum by people of Arab heritage. In the south, African tribes have rebelled since the 1950s. And millions have died. In a quest for peace, the Bush administration started a humanitarian and diplomatic campaign. Eleven billion dollars went into aid, and to train a South Sudanese government and security force. Five years ago, there was hope. Khartoum no longer ruled over them, and beneath them, there was oil.

John Prendergast: They voted almost unanimously, 99 percent to create their own state, to carve the South Sudan out of Sudan. And within two years it had crumbled into a full-scale war.

John Prendergast witnessed the stillbirth of a nation. He was an Africa specialist in the Clinton White House and now leads “The Enough Project,” which works for peace on the continent.

Scott Pelley: People living where we are now have really never known peace.

John Prendergast: And it isn’t just war. Mass atrocities are committed with regularity, almost become routine, slave raiding, aerial bombing, rape as a tool of war, child soldier recruitment. All the worst of the worst of the war crimes in the Geneva Conventions are perpetrated regularly in South Sudan, and have been throughout the series of wars since the independence of Sudan in the 1950s.

In 2013, the leaders of independent South Sudan’s two main ethnic groups, the Dinka and the Nuer, went to war over oil and power.

We found no sign of that wealth in a village called Mayom. Thousands of people crowded behind a white strip. Compelled by the promise of food, they had reached the finish line of a daylong trek through killing fields and drowning land.

Peter McKay: They’ve survived the war of independence. They’ve survived two years of civil war. Many of them have been displaced. The level of orphan children is just staggering. It must be one of the highest in the world here in South Sudan.

This was an emergency food distribution run by Peter McKay for the World Food Programme.

Scott Pelley: Tell me about the orphans.

Peter McKay: You will meet women who will have half a dozen children of their own for example. They will have been displaced four or five times from their locations. They will have five or six children of other women who have died, or disappeared during the conflict. The husbands of all of those women have been killed in the fighting. That is a terrible legacy for this country.

Hope arrived at 700 feet and 190 miles an hour. Thirty-three tons of food scattered in the sky and cratered the Earth like a volley of mortars.

The WFP has chartered most of the commercial cargo planes in the world rigged that are for dropping food. As this crew turned for a second run, they readied boxes of fragile cans of cooking oil – each labeled with an American flag. We lashed a camera on one. “Manna from Heaven,” by parachute.

The World Food Programme hired what men it could find to heave the cargo. Each bag, 110 pounds. Each man, not much more. It’s 352 paces from the drop zone. The mud held them up and the heat beat them down. But they shouted, ‘keep going.’

We noticed their eyes, fixed on a place beyond want. They had seen hunger in their children and so, anger, fear, and will, moved a mountain.

What you see here is the about half of one plane load and each plane load will feed 1,600 people for 30 days. Now that seems like a lot except the town of Mayom has 50,000 people who need food so it’s going to take 27 air drops.

Scott Pelley: We watched that crowd yesterday wait all day for those airdrops, and at the end of the day some of those people left with nothing.

Owen Davies: I had to personally reassure several people, “Don’t worry, more food is coming. The planes will keep coming.

Owen Davies and Brian Langdon are from New York. They lead a WFP team that arrives weeks before the airdrop. They gather every member of every family to register for a ration card.

Brian Langdon: We have to have everybody show up, so we know that, you know, the food isn’t being misdirected or misused.

Scott Pelley: What do you mean by that?

Owen Davies: You might have a situation where if you dropped, you know, 100 metric tons of food, you don’t know how it’s being distributed. It might be distributed to their friends. It might get diverted to another community entirely. They might start charging for it. So really, the goal is to reduce that by putting it in the hands of every individual household.

The ration card is supposed to be a guarantee, which prevents panic at the drop zone. But after we left Mayom, the fighting erupted again. The airdrops stopped. And 7,000 left with little or nothing.

Three million South Sudanese have been forced from their homes. Some can be reached by water. And the WFP pushed 200 tons of grain through a papyrus swamp called “the sudd,” Arabic for, the barrier.

The destination is a refugee camp called Mingkaman about two years ago during the war, 70,000 people were stampeded from their homes and set up the camp and then in early 2016 there was more fighting and another 30,000 people joined them. 100,000 people in desperate need of food.

It can cost $150 to deliver one bag by plane, but as little as $21 by boat. It is more dangerous but Shaun Hughes, who showed us the WFP’s operation, said his budget is falling far behind.

Shaun Hughes: Right now, food assistance is the only thing that stands between hundreds of thousands of people and absolute catastrophe. There are 4.8 million people across this country that are very severely food insecure and in need of assistance. We’re reaching, on a monthly basis, just over two million.

Scott Pelley: You’re reaching half the people who are in need.

Half, until the war intervenes. This was the World Food Programme warehouse filling up for the emergency. But the week after we were there a militia looted everything. Twenty million dollars in food and vehicles, gone.

Scott Pelley: Several humanitarian organizations think of South Sudan as too dangerous a place to work.

Shaun Hughes: There are certainly risks. There are a lot of risks to the security of our staff. I’ve personally lost colleagues working for WFP while I’ve been working here.

Scott Pelley: And yet, it’s worth it to press on?

Shaun Hughes: There are millions of lives that depend on us continuing to do our work. So we will take every measure that we can to keep our staff safe. But our commitment is very much with the people of South Sudan.

That’s a commitment the 100,000 people at our destination could not live without. Hoisting those same 110-pound bags, like the men, the women were lean from hunger,but stronger for fighting it.

Scott Pelley: Let me ask you mother, what does this food mean to you?

“This sustains me and keeps me healthy,” she said.

Scott Pelley: And to the people who sent you this food you say what?

“To the people who are helping us, we’re in a warzone that’s hard to reach. We need everything, food, clothes, plastic sheets to cover my hut and hoes for farming.”

For Josephine and the twins, we met earlier, food has been enough. This is Josephine now, 42 pounds up from 24. And the twins are up to 13 pounds—each.

Scott Pelley: Where does it go from here?

John Prendergast: Door number one, which most people expect, is that these leaders, the competing factions, the kleptocrats that are running this country will keep doing what they’re doing.  Door number two is a less likely scenario, but not impossible. And that is that the leadership here, because of international pressure, because of the citizenry’s demands for peace, will start to make decisions that are be at least a little more in the broader public interest than just their own pocketbooks. And so that’s the kind of future that I think every South Sudanese wants to see.

For now, they just hope to see another plane. Each sack of food will carry three people for 30 days. But there is no guarantee that there will be another.

For more information on the humanitarian effort and how to help, visit these websites: