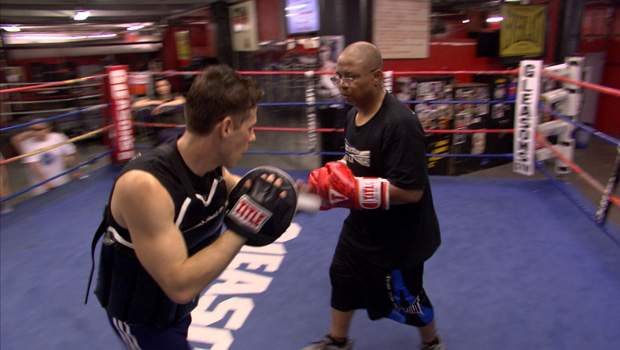 For a fighting chance against disease, people will sometimes go to unlikely places -- even, it turns out, to the boxing ring. Our Cover Story is reported by Lesley Stahl of "60 Minutes":

Aaron Latham sparred with his boxing coach, Roberta Marongiu. "Gimme all you got, come on!" she said.

He -- and everyone else in the class -- has Parkinson's.

It's a progressive neurological disorder that affects nearly a million Americans. You don't hear about very many with the disease getting better.

Latham and his fellow Parkinsonians, aged 45 to 92, are part of a new program that aims to stop the shrinking, If not reverse it.

Each exercise works on a symptom.

Stretching is for their stiffness; footwork for balance; punching to steady their tremors ...

Shouting to counter their soft-voice syndrome; and sparring for coordination.

Stahl asked, "What does boxing do for you, then?"

"Boxing's just the opposite of Parkinson's," Latham said. "Instead of to shrink you, everything's designed to pump you up. First of all, you get to put on these great gloves. It gives you enormous, giant hands and a different attitude toward the world. You get your physical courage back and your mental courage seems to kinda come along."

The program, called Rock Steady Boxing, uses professional boxing techniques (maybe a little more gently). Developed in Indianapolis in 2006, it has spread to over 50 gyms worldwide.

When Italian-born Roberta Marongiu first saw Rock Steady at a medical conference, "I just thought it was genius. 'Why didn't I come up with this?'" she laughed. "I thought it was an amazing program."

When she's not coaching, Marongiu is a researcher at the Weill-Cornell Medical College in New York, working on gene therapies for Parkinson's.

"My main goal has always been the quest for a cure, finding a cure," she said. "But lately in the last couple of years, I felt there was something missing. And when I found this program, I thought it was something that I could do to help right now, in the present."

So two years ago she and her husband, Alex Montaldo, an actor, went to Indiana to learn how to teach Rock Steady.

They then approached the folks at Gleason's in Brooklyn, a kind of grungy, no-frills, old-school gym, where Muhammad Ali trained, and where Robert De Niro trained for "Raging Bull."

Gleason's donates a ring for them three days a week.

"It's kind of curious -- I always heard that Muhammad Ali got Parkinson's from boxing," said Stahl.

But what about Montaldo? He wears body armor in the ring. "Yeah, and I'm glad I have to. One of our boxers specifically, he's the very reason why I had to buy that."

"It was good pain," Montaldo said, because the boxer had demonstrated how strong he'd become.

"I think I hit him a little bit too hard in his ribs," Les Mills said, "and he got home and he decided that it was time to get some body armor!"

"Was your right upper cut or something like that?" Stahl asked.

"Think it was the left."

When Mills, a New York City teacher and gym coach, was diagnosed with Parkinson's, it hit him hard.

Latham recalled, "When he first came in, he was not in great shape, both physically and psychologically. He was pretty depressed. Didn't really wanna do much. Well, you should see him now!"

Everyone Stahl spoke to in Latham's class said they've seen an improvement. Part of the secret is camaraderie ...

Competition ... and getting "pumped up."

"The trainers don't let you relax," said Mills. "They make you do what you're supposed to do, not what you wanna do. They push you so hard that it becomes a habit, a good habit."

Roberta in particular, laughed Latham, "is a slave driver. 'Come on, Aaron! Come on, Aaron. You can do it. Don't quit on me now!'"

"We don't see a jump from Aaron, we're going to do pushups!"

"Then it's okay with you?" Stahl asked.

"Well, I'm not sure about that. But it's not gonna help me to complain."

When he's not boxing, Latham is a novelist, a screenwriter and a playwright.

Stahl asked, "How bad is it to be interviewed by your wife?"

"It gives you the creeps," he replied. "In fact, normally this hand is perfectly steady. There's actually a little tremor in there now."

"Just cause I'm interviewing you?"

Alex Montaldo, Stahl noted, really works them. "I could not believe how arduous the hour is," she said.

"What about watching your wife acting like she's a sergeant in the Army shouting at these guys? What do you think of that?"

"Why do they always say that about me?" laughed Roberta.

Stephanie Combs-Miller, the director of research at the University of Indianapolis' College of Health Sciences, conducted the first major study on the effects of boxing therapy on Parkinson's.

"We studied people over a two-year period who participated in boxing and we didn't see any progression of the disease in the people that boxed."

"It arrested the disease?" asked Stahl.

"Right. In fact, in some cases, they were better after the two-year period of time. Their function was better."

Dr. Combs-Miller said the high intensity-type exercises can be neuro protective. "It enhances the uptake of the dopamine in the brain. It can improve growth of neurons.

"All the evidence we have now shows that, with exercise, particularly high-intensity exercise, we can improve strength. We can improve their walking ability and their balance and their quality of life. And likely, we're also seeing changes within the brain as well."

She says that one of the patients she studied, Tom Timberlake, shows what Rock Steady can do. "He'd had Parkinson's disease about six years and had really declined in health. Had almost become a recluse, wasn't getting out. Found Rock Steady, started in. Nine years later, you wouldn't recognize him. He is a fighter. And he is better today in 2015 than before he was diagnosed with Parkinson's disease. He's better now than before he was diagnosed.

"It saved his life."

Nobody's saying boxing is a cure -- just that people seem to improve.

Aaron Latham keeps coming back, three times a week. "Does this make you feel more optimistic about your disease?" Stahl asked.

"Yeah. My left arm used to shake all the time, the whole arm." His improvement, he noted, was just from punching a bag and doing exercises.

"So do you get a sense it's actually slowing the progression?"

"Well, it's certainly slowing the symptoms," he said.

What Latham is doing is something inconceivable a year ago.