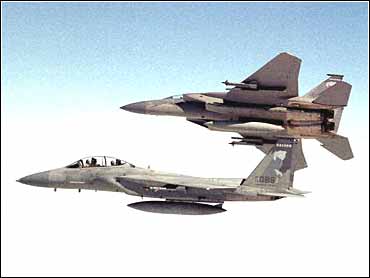 Two F-15 fighter jets intercepted and escorted a Hawaiian Airlines passenger jet to Seattle after a bomb threat was received against the plane, officials said.

No bomb was found.

Seattle police received a call at 7:50 p.m. Monday saying there was a bomb on Hawaiian Airlines Flight 22, a duty officer for the Federal Aviation Administration said.

The U.S. Air Force sent fighter jets to escort the plane to Seattle, the officer said. A Hawaiian Airlines spokesman said the fighters met the passenger jet somewhere over the Pacific.

The plane touched down without incident at 9:24 p.m., the FAA said. Passengers were allowed to leave the plane.

The flight, which originated in Honolulu, had 304 passengers and 15 crew members.

Passengers on the flight say it was very scary.

But they aren't the only ones who felt that way.

Erica Jorgensen, who lives in the Seattle's north end, said the planes were "flying way too close for my comfort" as they passed over her house toward the airport.

"It scared me out of my wits," said Jorgensen. "The house started to shake, and it sounded just like the Blue Angels (Navy aerobatic team) but closer than they ever get."

Police say the bomb threat call has been traced to a pay phone in the Pioneer Square area of Seattle.

Police went to the location, but did not find the caller.