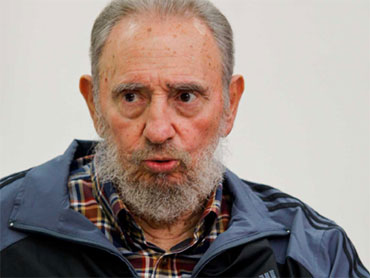 A relaxed and lucid Fidel Castro returned to the limelight Monday after years spent largely out of public view, discussing world events in a raspy voice in his most prominent television interview since falling seriously ill four years ago.

The 83-year-old former president talked about how tension between the United States and both North Korea and Iran could ultimately trigger a global nuclear war in an interview on "Mesa Redondo" - or "Round Table" - a daily Cuban talk show on current events.

The revolutionary leader wore a dark blue track suit top over a plaid shirt as he took questions at a desk in a sparsely decorated office at an undisclosed location. It was not immediately clear if the broadcast was live, but Castro referred to a July 5 article as having been published six days ago, which would mean the show was taped on Sunday.

Later, however, the program's host read from an essay published Sunday evening, referring to it as having come out "last night."

Castro warned that an attack on Iran would be catastrophic for America.

"The worst (for America) is the resistance they will face there, which they didn't face in Iraq," he said.

As the interview progressed, Castro at times showed flashes of his prowess as a powerful speaker. At other points, however, he paused for lengthy periods and shuffled pages in notes he kept in front of him. Later, he listened as the host read back long tracks from essays Castro himself wrote recently.

"Castro appeared to show little interest in opening of [U.S.] relations during his lifetime," Falk said.

The former Cuban leader has shunned the spotlight since undergoing emergency intestinal surgery in July 2006. The illness forced him to step down - first temporarily, and later permanently - and cede power to his younger brother Raul. His recovery has been a closely held state secret, and his health has been the subject of persistent rumors among exiles in Florida.

Castro's sudden reemergence comes after the dramatic announcement last week that Cuba will free 52 political prisoners in the next few months under a deal with the Roman Catholic Church. The former Cuban leader made no mention of the deal, focusing instead on international events and repeating points he has made in recent essays.

The prisoner release constitutes a concession by Cuba, with the expectation that some change in U.S. policy will take place in the waning years of the Castro brother's regime, Falk reported.

While Cubans have become accustomed to reading Castro's writings, he has stayed largely out of the public eye since ceding power, helping Raul Castro solidify his place as the country's leader after a lifetime spent in his more famous brother's shadow.

Monday's highly-anticipated interview was announced in a front-page story in the Communist-party daily Granma earlier in the day. Castro has appeared in videotaped interviews with Cuban television in June and September 2007.

Photos of the elder Castro greeting workers at a science center were published in pro-government blogs and on state media over the weekend, the first time he has been photographed in public since his illness.

"I think it will have a positive effect on people," 21-year-old student David Suarez told AP. "It will give hope that once again he will help to solve our problems."

Magaly Delgado Rojo, a 72-year-old retiree in Havana's Playa neighborhood, said the appearances must have been carefully thought out by Cuban leadership.

"The photos (published over the weekend) and now the Round Table are meant to send a message: 'I am here and I am on top of everything ... I am a part of every decision that is being made,"' she said. "This is not casual at all. This is calculated."

The two Castros have ruled Cuba since overthrowing dictator Fulgencio Batista in 1959. Fidel's health has for years been the subject of frequent rumors - particularly among exiles in Florida, and his television appearance will undoubtedly be scrutinized for signs of his aging.

The photographs of Fidel published this weekend were taken on Wednesday at a scientific think tank in Havana. He is shown smiling and waving at workers, appearing relaxed and happy, but somewhat stooped. Granma republished the photographs on Monday under the story about his upcoming television appearance.

Cuba has occasionally released pictures showing Castro in private meetings with dignitaries, most recently during a visit in February by Brazilian President Luiz Inacio Lula da Silva. But he had not been photographed in a public setting since 2006.

Castro appeared in a 50-minute taped interview with the host of the Mesa Redonda, Randy Alonso, in June 2007, and discussed Vietnam and other topics. That appearance was announced more than a day before it aired.

He also appeared on Cuban television for an hour-long interview in September of that year, knocking down a slew of rumors of his death. That appearance was announced only minutes before it was broadcast.

A month later, he phoned in to a live broadcast featuring Venezuelan President Hugo Chavez, a close Castro ally who was visiting Cuba. Castro sounded healthy and in good humor, but he was not seen.

Castro has also appeared in video clips and photographs with visiting presidents and other dignitaries.