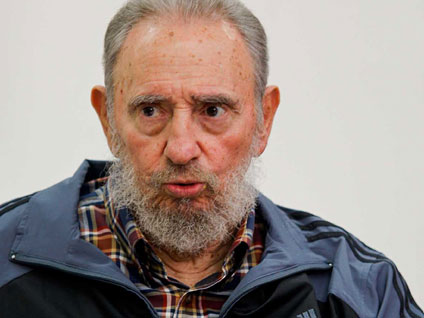 Fidel Castro, just one month before his 84th birthday, made a pre-taped appearance on Cuban TV Monday to talk about the danger he perceives of a war by the United States and Israel against Iran.

The Cuban journalist said the interview was taped earlier in the day.

The last time a video interview with the legendary Comandantewas aired on local TV was in September 2007.

Speaking firmly and quoting extensively from military experts, sociologists and others, as he often did in the past, Castro expressed scorn for what he called "the pretext" for hostilities with Iran, "that they could develop nuclear weapons in two years, or in three years."

And he warned that the U.S. should not expect the Iranians to crumble before an attack the way the Iraqis did. "Iraq was divided among Shiites and Kurds. Iran is not divided. The worst thing they will have to face is the resistance," said Castro.

Castro also accused the United States of being behind the blowing up of a South Korean warship in order to be able to provoke hostilities with North Korea, saying only a sophisticated explosive imbedded in the hull of the ship could have done that damage.

Sitting in a swivel desk chair and dressed casually in a track suit jacket with black stripes with a red and blue checked open necked shirt beneath it, Castro seemed very much like his old self, just, well, older. His emphasized his remarks with strong hand gestures, familiar to anyone who watched Castro deliver speeches in the past.

There was some disappointment as many Cubans thought Castro was going to make a live television appearance and also surprise at how well he looked and sounded.

"His voice was hesitant when he started speaking but gained force as he went on," said a university professor, one of several people who called me as soon as the program ended.

This appearance comes just days after cell phone photos of Castro visiting a national scientific center were posted on an Internet blog and later picked up by the official State-owned media. It was, as far as we know, his first public visit in four years.

There are various and conflicting opinions about why the elder Castro who stepped down from the Presidency first temporarily and then permanently after falling ill at the end of July 2006 has reemerged into the public arena but everyone agrees that he has made a near miraculous recovery.