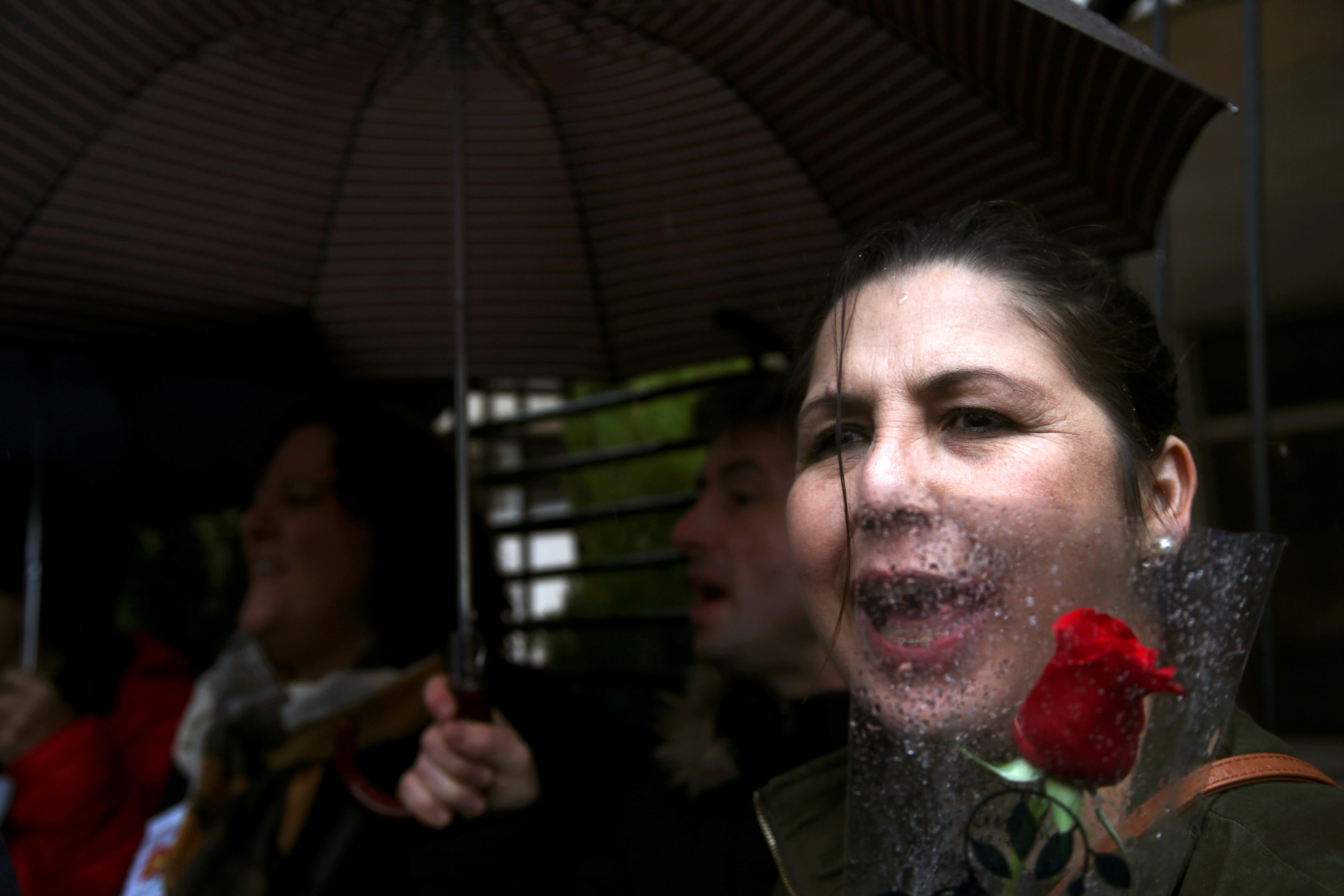 The death of Cuban leader Fidel Castro prompted celebrations among the country’s exiles in Miami -- and expressions of sorrow from some leaders worldwide.

Within half an hour of the Cuban government’s announcement Saturday of the death of the 90-year-old revolutionary leader, cheers were heard in Miami’s Little Havana. Thousands of people banged pots, waved Cuban flags and whooped in jubilation. “Cuba si! Castro no!” they chanted, while others screamed “Cuba libre!”

“Been waiting to hear this news all my life. Seems unreal,” Morales said in a text message to an Associated Press reporter.

U.S. President-elect Donald Trump took to Twitter hours later to share a thought that proved pithy even for the medium: “Fidel Castro is dead!”

However, Castro was mourned by some present and former national leaders.

Russian President Vladimir Putin said in a telegram to Raul Castro: “Free and independent Cuba, which he (Fidel Castro) and his allies built, became an influential member of the international community and became an inspiring example for many countries and nations. Fidel Castro was a sincere and reliable friend of Russia.”

Mexican president Enrique Pena Nieto tweeted that “Fidel Castro was a friend of Mexico, promoting bilateral relations based on respect, dialogue and solidarity.”

“Fidel Castro was one of the most iconic personalities of the 20th century,” Indian Prime Minister Nerendra Modi said on Twitter. “India mourns the loss of a great friend.”

Castro was a defiant demagogue, a dictator, a charismatic leader and, for decades, a Soviet puppet, all rolled into one, CBS News’ Pamela Falk, author of “Cuban Foreign Policy,” said.

The communist adversary for 10 U.S. presidents, Castro wore his trademark beard and army fatigues for nearly five decades, giving fiery speeches against what he called the evils of imperialism.

In the 1950s, Castro led the overthrow of Cuban dictator Fulgencio Batista.

Having seized power after years of fighting from the Sierra Maestra mountains, Castro was among the longest-serving heads of state, and he successfully gave Cuba outsized prominence in world affairs. He eliminated illiteracy, but failed to bring prosperity. Castro achieved a low infant mortality rate and a national health care system but at a price. He had no tolerance for dissent. Counter-revolutionaries were jailed by the thousands. He nationalized private real estate and many fled the island or were forced out.

In a statement on Saturday, Mr. Obama said, “we extend a hand of friendship to the Cuban people.” He said, “the Cuban people must know that they have a friend and partner in the United States of America.”

“For nearly six decades, the relationship between the United States and Cuba was marked by discord and profound political disagreements. During my presidency, we have worked hard to put the past behind us, pursuing a future in which the relationship between our two countries is defined not by our differences but by the many things that we share as neighbors and friends - bonds of family, culture, commerce, and common humanity,” the statement said.

Chinese President Xi Jinping said Castro “made immortal historical contributions to the development of socialism around the world.”

“With his death, the Chinese people have lost a close comrade and a sincere friend. His glorious image and great achievements will be recorded in history forever,” Xi said in a telegram to Raul Castro, state broadcaster CCTV said.

In a telegram to Raul Castro, Pope Francis offered “my sense of grief to your excellency and family.”

In a sign of his personal esteem, Francis signed the telegram, breaking from the Vatican’s usual practice of have the secretary of state send such messages. Francis met Castro during the papal visit to Cuba in September 2015.

Peter Hain, a former member of the British Cabinet and anti-apartheid campaigner, tempered praise for Castro with criticism of some aspects of his long rule.

“Although responsible for indefensible human rights and free-speech abuses, Castro created a society of unparalleled access to free health, education and equal opportunity despite an economically throttling USA siege,” Hain said. “His troops inflicted the first defeat on South Africa’s troops in Angola in 1988, a vital turning point in the struggle against apartheid.”

A statement from the Spanish government hailed Castro as “a figure of enormous historical importance.”

“As a son of Spaniards, former president Castro always maintained close relations with Spain and showed great affection for his family and cultural ties. For this reason Spain especially shares the grief of Cuba’s government and authorities,” the government statement said.

There were shouts and insults in Madrid as a small crowd composed of both pro- and anti-Castro supporters met in front of the Cuban embassy.

“Fidel Castro in the 20th century did everything possible to destroy the colonial system, to establish cooperative relations,” former Soviet President Mikhail Gorbachev was quoted as telling the Interfax news agency.

“Fidel survived and strengthened the country during the most severe U.S. blockade, while there was enormous pressure on him, and still led his country out of the blockade on the road of independent development.”

Venezuelan President Nicolas Maduro recalled Castro’s departure from Mexico on the yacht Granma with his brother Raul and several dozen supporters to start their revolution.

“Sixty years after the Granma sailed from Mexico, Fidel sails toward the immortality of all those who fight their whole lives,” Maduro tweeted. “Onward to victory, always!”

Former U.S. president Jimmy Carter said he and his wife Rosalynn “remember fondly our visits with him in Cuba and his love of his country.” The couple visited Cuba in 2002, long after Carter left office.

Bolivian President Evo Morales said on Twitter that Castro was “the leader who taught us to fight for the sovereignty of the state and the dignity of the peoples of the world.”

Ed Royce, chairman of the U.S. House of Representatives Foreign Affairs Committee, said “no one should rule anywhere near as long as Fidel Castro did.”

“His legacy is one of repression at home, and support for terrorism abroad. Sadly, Raul Castro is no better for Cubans who yearn for freedom,” Royce said.

“I hope his death can start a freedom revolution in Cuba,” Denmark’s Foreign Minister Kristian Jensen said. “Any demise is sad. In this case I believe that it can bring something good.”

Lebanon’s militant Hezbollah group described Castro as a great leader. Ammar al-Moussawi, who is in charge of the group’s international relations, lauded Castro as “a historic symbol whose life was a lighthouse to all revolutionaries around the world.”

Guyanese Prime Minister Moses Nagamootoo said Castro shared his island’s resources with any nation that dared ask for help. The Castro government sent thousands of doctors and nurses to work in remote Caribbean areas where local and other foreign medical personnel had refused to go, Nagamootoo said.

“His and Cuba’s contribution to humanity and the Caribbean is unmatched by any other nation in terms of brotherly and sisterly relations. He was an international gift to humanity,” he said.