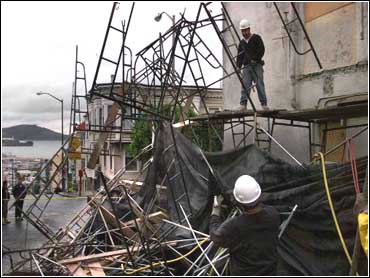 Some of the gusts were as high as 60 mph and broke windows, uprooted small trees and forced the cancellation of a major golf tournament.

Two workers on a scaffold in San Francisco's Russian Hill neighborhood were injured as the structure buckled and then crumbled beneath them.

A third worker was stranded on a ledge of an unfinished building until rescue workers got to him.