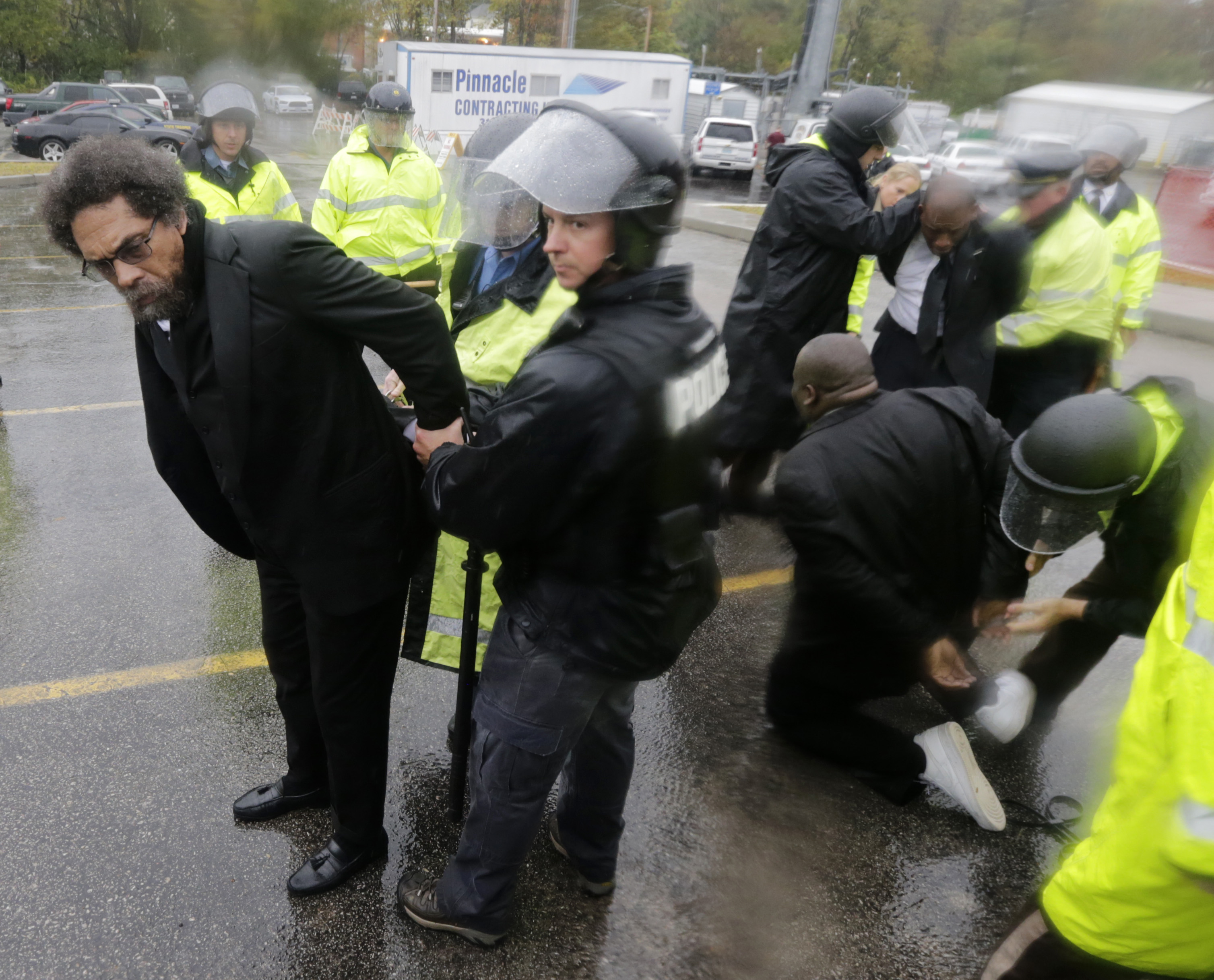 FERGUSON, Mo. -- Pounding rain and tornado watches didn't deter hundreds of protesters who stayed outside Ferguson police headquarters for more than four hours Monday, the same amount of time that the 18-year-old Michael Brown's body was left in the street after he was fatally shot by police.

Organizers of the four-day Ferguson October protests dubbed the day "Moral Monday" and committed acts of civil disobedience across the St. Louis region.

In addition to the initial march on Ferguson police headquarters, protesters blocked the entrance to a major employer, held a loud rally inside St. Louis City Hall, disrupted business at a Ferguson shopping center and a Wal-Mart and tried to crash a private fundraiser for a St. Louis County executive candidate where U.S. Sen. Claire McCaskill was scheduled to appear. On Monday night, protesters announced plans to picket a second Wal-Mart in the St. Louis suburbs.

All told, more than 50 people were arrested, including scholar and civil rights activist Cornel West.

West was among 42 arrested for peace disturbance at the Ferguson police station,according to KMOV-TV reporter Craig Cheatham. Some protesters used a bullhorn to read the names of people killed by police nationwide. Christian, Jewish and Muslim clergy members -- some of whom were among the first arrested -- led a prayer service before marching to the station two blocks away.

"My faith compels me to be here," said Bishop Wayne Smith of the Episcopal Diocese of Missouri. "I want to show solidarity, and call attention to the structural racism of St. Louis."

Protesters were met by about 40 officers in riot gear. Several clergy members approached individual officers and asked them to "repent" for Brown's killing and other acts of violence. Some officers engaged the protesters, while others ignored the efforts.

"My heart feels that this has been going on too long," Ferguson officer Ray Nabzdyk told the clergy. "We all stand in fault because we didn't address this."

Outside Emerson Electric headquarters in Ferguson, six people were arrested for failing to disperse after blocking a street, St. Louis County Police spokesman Brian Schellman said. Emerson is one of the region's largest employers.

At St. Louis City Hall, about 100 protesters blew whistles that echoed off the marble walls. Protest leader Kennard Williams presented a list of four demands to Jeff Rainford, chief of staff for Mayor Francis Slay. Slay was not in the office Monday.

The demands called for an end to participation in a program providing military equipment to police, body cameras for all officers, a civilian review board for police and mandatory independent investigations whenever police kill someone.

Rainford said St. Louis is not part of the militarization program; he promised the other demands will be taken seriously.

"We are already working on all of these things," he said.

Williams said that wasn't good enough, and pledged further disruptions in days to come. One protester was arrested for property damage.

Hundreds of people marched to Saint Louis University in the pre-dawn hours Monday, KMOV reported. A small group held a brief demonstration inside the upscale Plaza Frontenac shopping center in St. Louis County. Another group was turned away by police and security at a Ferguson Wal-Mart, but the store closed out of concern about the protest.

County police spokesman Brian Schellman said Monday night that several protesters were arrested there but could not provide a precise total. He added that an unspecified number of additional arrests were made at the Webster Groves fundraiser for County Councilman Steve Stenger, a Democrat who has come under criticism for his political links to St. Louis County Prosecuting Attorney Bob McCulloch.

Ferguson October began Friday with protesters marching to the St. Louis County prosecutor's office and renewing calls for charges against Darren Wilson, the officer who shot Brown. A grand jury is reviewing the case, and the U.S. Justice Department is conducting a civil rights investigation.