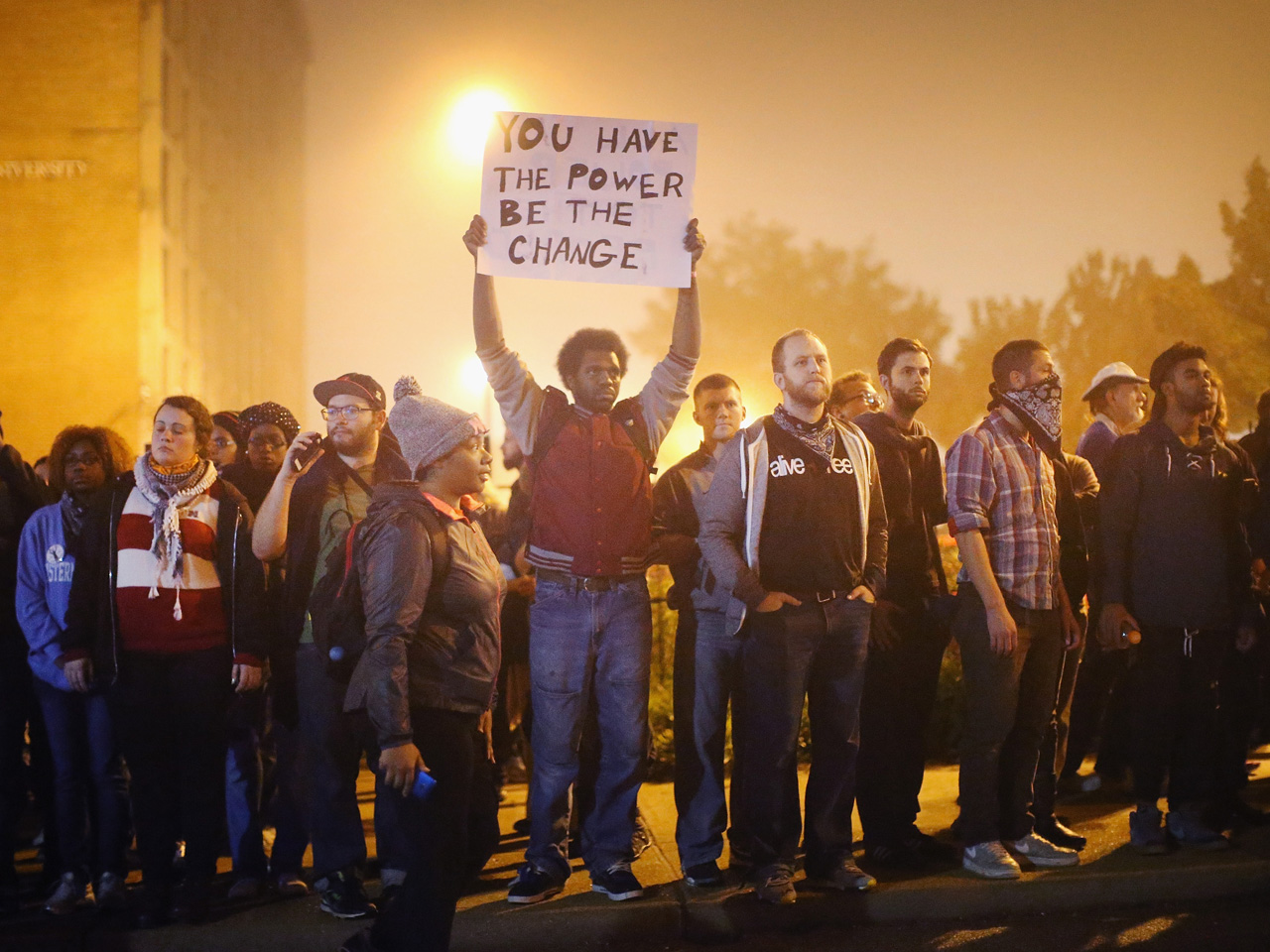 ST. LOUIS - More demonstrations are planned over the shooting of a black 18-year-old by a white police officer in suburban Ferguson this summer, after 17 people were arrested during weekend protests, St. Louis police said.

Organizers of the four-day Ferguson October summit are protesting the shooting of Michael Brown, which sparked sometimes violent demonstrations in the predominantly black St. Louis suburb of Ferguson in August.

Early on Sunday morning, about 200 protesters, some wearing masks, made their way to the south St. Louis neighborhood where another black 18-year-old, Vonderrit D. Myers, was killed by a white police officer recently. Protesters marched toward a QuickTrip gas station convenience store and tried to force open its doors, St. Louis Police Chief Sam Dotson said at a news conference.

Police assembled in riot gear and instructed the crowd to disperse, he said. About 50 of the marchers created a human chain by locking their arms and about half of them heeded the police warning and left.

"The people who were left there were people who made a conscious decision they wanted to be arrested," he said.

St. Louis police spokeswoman Schron Jackson said Sunday in an email that 17 people were arrested on suspicion of unlawful assembly. There were no reports of injuries or property damage, the email said.

On Monday, a "direct action" led by local and visiting clergy members is planned for Ferguson and other spots in and around St. Louis. Protest leaders don't plan to release details until shortly ahead of time to avoid tipping off law enforcement.

"We still are knee deep in this situation," Kareem Jackson, a St. Louis rap artist and community organizer whose stage name is Tef Poe, said Saturday. "We have not packed up our bags, we have not gone home. This is not a fly-by-night moment. This is not a made-for-TV revolution. This is real people standing up to a real problem and saying, 'We ain't taking it no more.'"

A crowd that organizers estimated at 3,000 marched peacefully through downtown St. Louis on Saturday to protest Brown's death and other fatal police shootings of black males in the St. Louis area and nationwide. No arrests were reported on Saturday.

Outside Busch Stadium in downtown St. Louis, where the Cardinals baseball team was playing the San Francisco Giants this weekend in the National League Championship Series of professional baseball, several dozen protesters stood on the sidewalk Saturday night, chanting and holding signs. The St. Louis Post-Dispatch reported that fans headed to the game mainly went around the protesters without stopping to look, though a few cheered their efforts. Game 2 in the series is scheduled for Sunday night.

The planned events began Friday afternoon with a march outside the St. Louis County prosecutor's office, where protesters renewed calls for prosecutor Bob McCulloch to charge Darren Wilson, a white Ferguson officer, in the Aug. 9 death of Brown. A grand jury is reviewing the case and the Justice Department has opened a civil rights investigation.

Organizers said beforehand that they expected as many as 6,000 to 10,000 participants for the weekend's events.

Tensions have simmered since Brown's death. Residents were upset about the way his body lay in the street for more than four hours while police investigated the shooting. Many insist Brown was trying to surrender, with his hands up. Residents also protested the military-style police response to the days of riots and protests that erupted immediately after Brown's shooting in the predominantly black St. Louis suburb where just three blacks serve on a 53-officer force.

Since Brown's death, three other fatal police shootings of black males have occurred in the St. Louis area. The most recent involved an off-duty St. Louis officer who was working for a private neighborhood security patrol when he shot and killed Myers on Wednesday night.

The white officer, whose name hasn't been released, fired 17 rounds after police say Myers opened fire. Myers' parents say he was unarmed, and many speakers at the Saturday rally echoed those doubts.