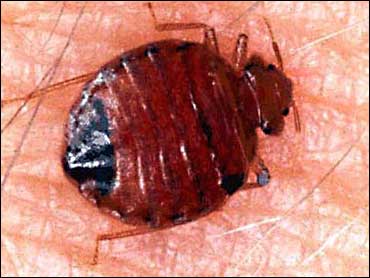 The federal government is waking up to what has become a growing nightmare in many parts of the country - a bed bug outbreak.

The tiny reddish-brown insects, last seen in great numbers prior to World War II, are on the rebound. They have infested college dormitories, hospital wings, homeless shelters and swanky hotels from New York City to Chicago to Washington.

They live in the crevices and folds of mattresses, sofas and sheets. Then, most often before dawn, they emerge to feed on human blood.

The venue - the Sheraton Crystal City Hotel in Arlington - has had no reported bed bug problems, according to a popular online registry, so at least conference participants will be sleeping tight.

"The problem seems to be increasing and it could definitely be worse in densely populated areas like cities, although it can be a problem for anyone," said Lois Rossi, director of the registration division in the EPA's Office of Pesticide Programs.

One of the problems, according to researchers and the pesticide industry, is that there are few chemicals on the market approved for use on mattresses that are effective at reducing bed bug numbers.

The EPA, out of concern for the environment and the effects on public health, has pulled many of the chemicals that were most effective in eradicating the bugs from the U.S. over the last 50 years - such as DDT - off of shelves.

Increasing international travel has also increased the chances for the bugs to hitchhike from developing countries which never eradicated them completely.

"This is a worldwide resurgence," said Dini Miller, an entomologist and bed bug expert at Virginia Polytechnic Institute and State University, who until 2001 only saw bed bugs on microscope slides dating from the 1950s. Now she gets calls several times a day from people who are often at their wits end dealing with the problem.

"I can't tell you how many people have spent the night in their bath tubs because they are so freaked out by bed bugs," Miller said. "I get these people over the phone that have lost their marbles."

Bed bugs are not known to transmit any diseases. But people have had an allergic reaction to their bites. The insects release an anticoagulant to get blood flowing, and they also excrete a numbing agent so their bites don't often stir a victim's slumber.

In a recent review of research on the pesky critters, researchers reviewed 53 recent studies on bedbugs and their health and medical effects. The results showed that although bedbugs have been blamed for the spread of up to 40 different human diseases, there is little evidence to suggest they are carriers of human disease.

Those often hardest hit are the urban poor, Miller said. These are people who cannot afford to throw out all their belongings or take the sanitation measures necessary to rid them of the problem.

Because the registration of new pesticides takes so long, one thing the EPA could do is to approve some pesticides for emergency use, Miller said.

The pesticide industry will be pushing for federal funding for research into alternative solutions, such as heating, freezing or steaming the bugs out of bedrooms.

"We need to have better tools," said Greg Baumann, a senior scientist at the National Pest Management Association. "We need EPA to consider all the options for us."