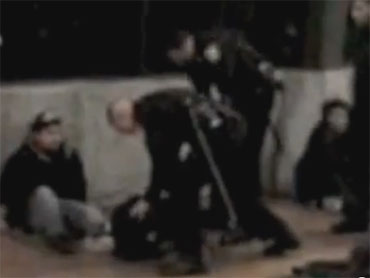 Federal officials say they will investigate the fatal shooting of an unarmed black man by a white police officer on an Oakland train platform to determine whether the case warrants federal prosecution.

The U.S. Department of Justice say the review will be conducted by its Civil Rights Division, the U.S. Attorney's Office in San Francisco and the FBI.

At least five bystanders videotaped the incident in what was among the most racially polarizing cases in California since four Los Angeles officers were acquitted in 1992 in the beating of Rodney King.

During the trial, prosecutors said the 28-year-old Mehserle became angry at the 22-year-old Grant for resisting arrest. He was shot in the back while he lay face-down.

The jury had a choice between second-degree murder and lesser charges of voluntary and involuntary manslaughter.

Alameda County Deputy District Attorney David Stein said in his closing argument that Mehserle let his emotions get the better of him and intended to shoot Grant with the handgun without justification.

Mehserle testified that he struggled with Grant and saw him digging in his pocket as officers responded to reports of a fight at a train station. Fearing Grant may have a weapon, Mehserle said he decided to shock Grant with his Taser but pulled his .40-caliber handgun instead.

Defense attorney Michael Rains contended the shooting was a tragic accident. Mehserle had no motive to shoot Grant, even though he was resisting arrest, the lawyer argued.

The jury found that Mehserle didn't mean to kill Grant, but that his behavior was still so negligent that it was criminal. Involuntary manslaughter convictions carry a sentence of two to four years.

The verdict , where the case has enflamed racial tensions.