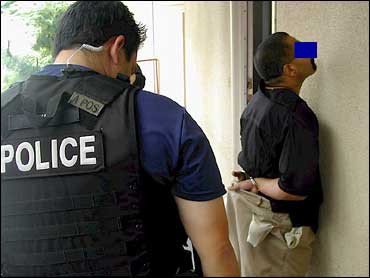 More than 1,100 people wanted for violent sex crimes were among 9,037 fugitives arrested in a weeklong roundup, the Justice Department said Thursday.

The arrests were made as part of "Operation Falcon II," a 27-state dragnet timed to coincide with National Victims Rights Week.

This year's focus was on sex offenders, a group that Attorney General Alberto Gonzales has made a priority in his 15 months at the Justice Department. U.S. Marshals Service Director John Clark said Thursday at a news conference in Washington: "I couldn't be prouder."

"By using that strength, we did something we could never do alone," Clark said.

"But we are not done," Gonzales said.

It was the largest number ever captured in a single law enforcement operation, the department said. The arrests were made mainly in 27 states, mostly west of the Mississippi River, and also in Guam and the Northern Mariana Islands.

Among those caught was William Wisham, who authorities said failed to register as a sex offender when he moved to a motel in Victorville, Calif. Investigators found letters to children, notes explaining why he enjoys sex with children, child pornography, candy and methamphetamines.

Police are working to locate children listed in Wisham's diary-style notes and said initial indications are that Wisham used candy to lure at least one child.

In Oahu, Hawaii, police arrested Herbert Damwijk, who is wanted in Washington state on two counts of child rape and molestations against 8-year-old girls, the department said. He was arrested April 17 at his father's residence and awaits extradition to Washington.

Last week's sweep netted more than 10,000 fugitives, 10 times the average in a week, but just 1 percent of the 1 million fugitives in the FBI's national database.

"As a prelude to National Crime Victim's Rights Week, this cooperative effort removed some of the country's most dangerous wanted criminals from the streets," according to the Marshals' Web site.

FALCON stands for Federal and Local Cops Organized Nationally. The highest priority was given to those wanted for sexual offenses, crimes against women, children and the elderly, as well as unregistered sex offenders, reports CBS' Beverly Lumpkin.

Marshals arrested 35,500 federal fugitives for all of the government budget year that ended Sept. 30. They worked with state and local authorities to nab another 44,000 people, according to the Marshals' Web site.