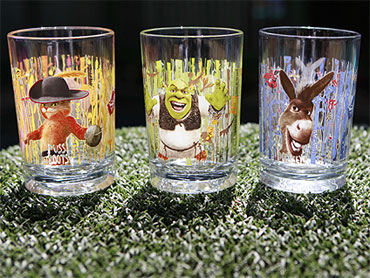 Federal regulators leaned on McDonald's to quickly recall 12 million "Shrek"-themed drinking glasses this spring because they concluded that a typical 6-year-old could be exposed to hazardous levels of the metal cadmium by touching one of the glasses just eight times in a day, according to documents obtained under the federal Freedom of Information Act.

Of the four collectibles in the series tied to the hit movie "Shrek Forever After," the glass depicting the character Puss in Boots, with a predominantly orange design, prompted the recall push.

The investigatory file shows how the U.S. Consumer Product Safety Commission aggressively turned a tip that the glasses contained cadmium in their colored exterior designs into an assessment that the Puss in Boots glasses posed an unacceptable risk to younger kids.

It was a first-of-its-kind recall for the agency, which wasn't accustomed to testing for cadmium in glassware and had no official level at which results would represent a health hazard. Yet within a week, McDonald's had agreed to urge its customers to return all the glasses, even though the fast food giant didn't think they posed a serious health danger - and the agency thought only one from the set did.

"Staff took an approach at the time that was highly protective of children, and McDonald's took a proactive approach in conducting the recall," safety commission spokesman Scott Wolfson said in response to questions about the 124 pages from the file, many of them completely whited out, that the agency provided to The Associated Press.

There have been no reports of illness from the glasses, and no one has suggested that a child could be stricken just by handling one. The concern has been long-term, low-level exposure to a metal that when ingested accumulates in the body for decades and at high enough levels can punch holes in kidneys, soften bones and, according to some new research, hinder the development of young brains. It is also a carcinogen.

Cadmium is used in a range of consumer products - in glassware, it is a pigment. Manufacturers say there's no viable alternative if they want bold "fire engine" red for their designs, and that oranges and yellows are difficult to produce without it.

Cadmium pigments are ingredients in enamels that are baked into a glass's exterior. The agency's testing showed that children could rub off some cadmium when they touched the glasses. When young consumers put their contaminated hands to their mouths, whether because they're eating or just being a kid, they'd be ingesting a poison.

The simple presence of cadmium in the glasses might not be a problem - the question was whether people who handled them could be exposed, and whether that exposure represented a health hazard. The CPSC documents show that to find out, agency scientists improvised a scenario involving an average-sized 6-year-old (the younger age range of children who'd be attracted to the glasses, according to an agency analysis).

First, they got two sets of four glasses each from a McDonald's near the agency's headquarters in Bethesda, Md.

In an agency that often describes itself as understaffed, the push was on.

Less than 24 hours later, on the Friday afternoon of Memorial Day weekend, another scientist was checking in: "Any news?" he e-mailed. "Soon," was the prompt reply. Testing continued into Saturday.

The glasses were being subjected to a test typically used to gauge the risk posed by lead in vinyl products. The designs of each glass were wiped 30 times total with three water-moistened towelettes, a way of mimicking contact with a human hand. Those wipes were then analyzed for the presence of any cadmium - as well as lead, mercury, barium or chromium, other elements the agency considers a hazard at high enough levels. Testing for those elements effectively turned up nothing.

Three of the glass designs released relatively low amounts of cadmium - so low that they were not deemed a health hazard, according to a CPSC official with knowledge of the results. The Puss in Boots glass recorded a much higher reading.

Agency staff had judged that an average-sized 6-year-old of 45 pounds who ingested just 0.6 micrograms of cadmium in a day would hit a hazardous level. A child who weighed more could tolerate more cadmium, one who weighed less could tolerate less. While these are microscopic amounts - it takes 1,000 micrograms to make one milligram - cadmium is so toxic that micrograms matter, according to public health authorities including the U.S. Centers for Disease Control and Prevention.

Using a formula that assumed only half of the cadmium on a child's hand would make it into the mouth, the agency concluded that just eight touches of the Puss in Boots glass would expose that 6-year-old to as much cadmium as they could safely ingest in a day.

The commission's preliminary "acceptable daily intake level" of 0.03 micrograms for each kilogram of body weight has since been changed based on further research, according to spokesman Wolfson. He would not discuss whether the new standard, which the agency expects to release this month, will be higher or lower.

As the testing began, the agency approached McDonald's. After conducting its own analysis, the fast food giant voluntarily recalled the glasses.

Consumers already had about 9 million "Shrek Forever After" glasses by the time of the June 4 announcement, according to the documents. Another 3 million were awaiting public distribution through the chain's restaurants, where they were being sold for about $2.

All the glasses were recalled, including those depicting the Shrek, Princess Fiona and Donkey characters, even though it was only the Puss in Boots glasses that registered high cadmium levels on government tests.

McDonald's would neither release its own testing data to AP nor comment on it. In the documents provided to AP, any references to McDonald's results were deleted.

Until this year, the safety commission had never recalled any item due to cadmium. That changed starting in January, when the AP reported that some Chinese manufacturers of children's metal jewelry were substituting cadmium for lead, which has effectively been banned under recent federal law.

After a series of jewelry recalls, in late May the safety commission heard from a California congresswoman whose office had received two tips from private citizens whose own testing equipment detected cadmium in the Shrek glassware.

The glasses' manufacturer, a subsidiary of the French firm Arc International with a factory in Millville, N.J., continues to insist they are safe.

"The Shrek-themed glasses met all applicable federal and state standards for cadmium," Fred Dohn, CEO of Americas for Arc International, said in a written statement. "Further, the CPSC assessment is based on an admittedly preliminary standard that has not yet been adopted by the agency and compliance tests that may not fairly assess real world exposure."

The Society of Glass and Ceramic Decorated Products, an association representing U.S. glassware manufacturers, says that after the recall it sponsored wipe testing at an independent lab - and that none of the glasses shed any cadmium. The society's testing was different from the government method in one key way: The glasses were washed before being wiped.

The society's executive director, Myra Warne, said members have reported a "chilling effect" on business following the recall. She said several orders of more than $100,000 were canceled due to what she described as unjustified fears that glassware isn't safe.

Arc International manufactured the glasses in New Jersey using enamel it bought from Ferro Corporation, a multinational company headquartered in Cleveland and a major supplier of colors to glassware makers.

All the enamels came from Europe and "complied with all applicable legal requirements," Ferro spokeswoman Mary Abood said. "We believe the product to be safe."