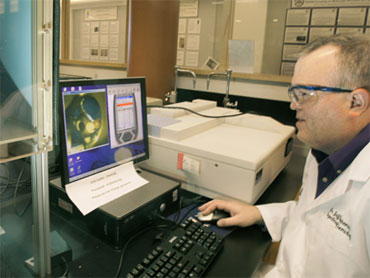 Barred from using lead in children's jewelry because of its toxicity, some Chinese manufacturers have been substituting the more dangerous heavy metal cadmium in sparkling charm bracelets and shiny pendants being sold throughout the United States, an Associated Press investigation shows.

The most contaminated piece analyzed in lab testing performed for the AP contained a startling 91 percent cadmium by weight. The cadmium content of other contaminated trinkets, all purchased at national and regional chains or franchises, tested at 89 percent, 86 percent and 84 percent by weight. The testing also showed that some items easily shed the heavy metal, raising additional concerns about the levels of exposure to children.

A spokesman for the U.S. Consumer Product Safety Commission, which regulates children's products, said Sunday that the agency "is opening an investigation" and "will take action as quickly as possible to protect the safety of children."

Cadmium is a known carcinogen. Like lead, it can hinder brain development in the very young, according to recent research.

Children don't have to swallow an item to be exposed — they can get persistent, low-level doses by regularly sucking or biting jewelry with a high cadmium content.

To gauge cadmium's prevalence in children's jewelry, the AP organized lab testing of 103 items bought in New York, Ohio, Texas and California. All but one were purchased in November or December.

The results: 12 percent of the pieces of jewelry contained at least 10 percent cadmium.

Some of the most troubling test results were for bracelet charms sold at Walmart, at the jewelry chain Claire's and at a dollar store. High amounts of cadmium also were detected in "The Princess and The Frog" movie-themed pendants.

"There's nothing positive that you can say about this metal. It's a poison," said Bruce A. Fowler, a cadmium specialist and toxicologist with the U.S. Centers for Disease Control and Prevention. On the CDC's priority list of 275 most hazardous substances in the environment, cadmium ranks No. 7.

Jewelry industry veterans in China say cadmium has been used in domestic products there for years. Zinc, the metal most cited as a replacement for lead in imported jewelry being sold in the United States, is a much safer and nontoxic alternative. But the jewelry tests conducted for AP, along with test findings showing a growing presence of cadmium in other children's products, demonstrate that the safety threat from cadmium is being exported.

A patchwork of federal consumer protection regulations does nothing to keep these nuggets of cadmium from U.S. store shelves. If the products were painted toys, they would face a recall. If they were industrial garbage, they could qualify as hazardous waste. But since there are no cadmium restrictions on jewelry, such items are sold legally.

The CPSC has cracked down on the dangers posed by lead and products known to have killed children, such as cribs, it has never recalled an item for cadmium — even though it has received scattered complaints based on private test results for at least the past two years.

There is no definitive explanation for why children's jewelry manufacturers, virtually all from China in the items tested, are turning to cadmium. But a reasonable double whammy looms: With lead heavily regulated under the Consumer Product Safety Improvement Act of 2008, factories scrambled for substitutes, just as cadmium prices plummeted.

That law set a new, stringent standard for lead in children's products: Only the very smallest amount is permissible — no more than 0.03 percent of the total content. The statute has led manufacturers to drastically reduce lead in toys and jewelry.

The law also contained the first explicit regulation of cadmium, though the standards are significantly less strict than lead and apply only to painted toys, not jewelry.

To determine how much cadmium a child could be exposed to, items are bathed in a solution that mimics stomach acid to see how much of the toxin would leach out after being swallowed.

The jewelry testing for AP was conducted by chemistry professor Jeff Weidenhamer of Ashland University in Ohio, who over the past few years has provided the CPSC with results showing high lead content in products that were later recalled. His lab work for AP assessed how much cadmium was in each item. Overall, 12 of the 103 items each contained at least 10 percent cadmium. Two others contained lower amounts, while the other 89 were clean.

Ten of the items with the highest cadmium content were then run through the stomach acid test to see how much would escape. Although that test is used only in regulation of toys, AP used it to see what hazard an item could pose because unlike the regulations, a child's body doesn't distinguish between cadmium leached from jewelry and cadmium leached from a toy.

"Clearly it seems like for a metal as toxic as cadmium, somebody ought to be watching out to make sure there aren't high levels in items that could end up in the hands of kids," said Weidenhamer.

The CPSC reacted swiftly to the AP story. Agency spokesman Scott Wolfson said: "CPSC will open an investigation into the products tested by Professor Weidenhamer, who we have worked closely with before." He said CPSC would study Weidenhamer's results, attempt to buy the contaminated products content and "take appropriate action as quickly as possible."

— Three flip flop bracelet charms sold at Walmart contained between 84 and 86 percent cadmium. The charms fared the worst of any item on the stomach acid test; one shed more cadmium in 24 hours than what World Health Organization guidelines deem a safe exposure over 60 weeks for a 33-pound child.

The bracelet was purchased in August 2008. The company that imported them, Florida-based Sulyn Industries, stopped selling the item to Wal-Mart Corp. in November 2008, the firm's president said. Wal-Mart would not comment on whether the charms are still on store shelves, or how many have been sold.

Sulyn's president, Harry Dickens, said the charms were subjected to testing standards imposed by both Wal-Mart and federal regulation — but were not tested for cadmium.

In separate written statements, Dickens and Wal-Mart said they consider safety a very high priority. "We consistently seek to sell only those products that meet safety and regulatory standards," Wal-Mart said. "Currently there is no required cadmium standard for children's jewelry."

As was the case with every importer or retailer that responded to AP's request for comment on the tests, neither Sulyn nor Wal-Mart would address whether the results concerned them or if the products should be recalled.

— Four charms from two "Rudolph the Red-Nosed Reindeer" bracelets sold at a Dollar N More store in Rochester, N.Y., were measured at between 82 and 91 percent cadmium. The charms also fared poorly on the stomach acid test. Two other charms from the same bracelets were subjected to a leaching test which recreates how much cadmium would be released in a landfill and ultimately contaminate groundwater. Based on those results, if the charms were waste from manufacturing, they would have had to be specially handled and disposed of under U.S. environmental law. The company that imported the Rudolph charms, Buy-Rite Designs, Inc. of Freehold, N.J., has gone out of business.

— Two charms on a "Best Friends" bracelet bought at Claire's, a jewelry chain with nearly 3,000 stores in North America and Europe, consisted of 89 and 91 percent cadmium. The charms also leached alarming amounts in the simulated stomach test. Informed of the results, Claire's issued a statement pointing out that children's jewelry is not required to pass a cadmium leaching test.

"Claire's has its products tested by independent accredited third-party laboratories approved by the Consumer Product Safety Commission in compliance with the commission's standards, and has passing test results for the bracelet using these standards," the statement said. Those standards scrutinize lead content, not cadmium.

— Pendants from four "The Princess and The Frog" necklaces bought at Walmart ranged between 25 and 35 percent cadmium, though none failed the stomach acid test nor the landfill leaching test. The Walt Disney Co., which produced the popular animated movie, said in a statement that test results provided by the manufacturer, Rhode Island-based FAF Inc., showed the item complied with all applicable safety standards.

An official at FAF's headquarters did not respond to multiple requests for comment when informed of Weidenhamer's results; a woman at the company's office in southern China who would not give her name said FAF products "might naturally contain some very small amounts of cadmium. We measure it in parts per million because the content is so small, for instance one part per million." However, the tests conducted for AP showed the pendants contained between 246,000 and 346,000 parts per million of cadmium.

"It comes down to the following: Cadmium causes cancer. How much cadmium do you want your child eating?" said Michael R. Harbut, a doctor who has treated adult victims of cadmium poisoning and is director of the environmental cancer program at the Karmanos Cancer Institute in Detroit. "In my view, the answer should be none."

Xu Hongli, a cadmium specialist with the Beijing office of Asian Metal Ltd., a market research and consultancy firm, said test results showing high cadmium levels in some Chinese-made metal jewelry did not surprise her. Using cadmium alloys has been "a relatively common practice" among manufacturers in the eastern cities of Yiwu and Qingdao and the southern province of Sichuan, Xu said.

"Some of their products contain 90 percent cadmium or higher," she acknowledged. "Usually, though, they are more careful with export products."

She said she thought that manufacturers were becoming aware of cadmium's dangers, and are using it less, "But it will still take a while for them to completely shift away from using it."

The CPSC has received dozens of incident reports of cadmium in products over the past few years, said Gib Mullan, the agency's director of compliance and field operations. Though the CPSC has authority to go after a product deemed a public danger under the Federal Hazardous Substances Act — the law used in lead-related recalls several years ago — there have been no enforcement actions.

"We are a small agency so we can't do everything we think would be a good idea. We have to try to pick our spots," Mullan said. At most, the agency can investigate 10 percent of the tens of thousands of reports filed by the public each year, he said.

With the help of an outside firm, the CPSC has started a scientific literature review of cadmium and other heavy metals, including how the substances fare in leaching tests, according to spokesman Wolfson. "If there has a been a shift in manufacturing to the use of cadmium, CPSC will take appropriate action."

Two outfits that analyze more than a thousand children's products each year checked their data at AP's request. Both said their findings of cadmium above 300 parts per million in an item — the current federal limit for lead — increased from about 0.5 percent of tests in 2007 to about 2.2 percent of tests in 2009. Those tests were conducted using a technology called XRF, a handheld gun that bounces X-rays off an item to estimate how much lead, cadmium or other elements it contains. While the results are not as exact as lab testing, the CPSC regularly uses XRF in its product screening.

Much of the increase found by the Michigan-based HealthyStuff.org came in toys with polyvinyl chloride plastic, according to Jeff Gearhart, the group's research director. Both lead and cadmium can be used to fortify PVC against the sun's rays. Data collected by a Washington-based company called Essco Safety Check led its president, Seth Goldberg, to suspect that substitution of cadmium for lead partly explains the increase he's seen.

Rick Locker, general counsel for the Toy Industry Association of America, and Sheila A. Millar, a lawyer representing the Fashion Jewelry Trade Association, said their industries make products that are safe and insisted cadmium is not widely used.

Millar said jewelry makers often opt for zinc these days. "While FJTA can only speak to the experience of its members," Millar wrote in an e-mail, "widespread substitution of cadmium is not something they see."