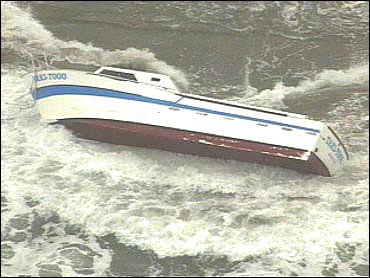 Federal officials say it could be months before they know why a charter fishing boat capsized in rough surf off the Oregon coast, killing at least nine people. Two men were missing and presumed dead.

Maintenance was done on the 32-foot Taki Tooo's throttle several days before the accident, said National Transportation Safety Board official John Goglia, but he said that might not have any bearing on what happened.

Goglia made a trip on a 47-foot Coast Guard ship following the same route as the Taki Tooo and later said he was surprised by the strength of the waves and couldn't fathom what the ride would have been like on the smaller vessel.

The eight survivors, though, had vivid memories of the Saturday morning accident.

"We went through a couple rough waves and turned north to try to get around a pretty large wave but then it crashed into the side," said Tyler Bohnet, 28, whose father, Sigmund Bohnet, died.

"When we rolled, I did not expect to take another breath," said Mark Hamlett, another survivor. He said the captain turned away from the waves instead of heading into them, as is normally done.

"He turned, something I don't think I would ever have done, but he turned to the north and was parallel to the wave. And I mean, I saw it coming."

Ted Lopatkiewicz, a spokesman for the NTSB, said the agency was aware of reports that the Taki Tooo had turned sharply to the north before it capsized, but that they haven't made any conclusions about whether that was a factor in the accident.

Goglia said the NTSB will examine the condition of the ocean when the boat set out, as well as the boat itself and its equipment. The shell of the vessel, which washed ashore, will be moved to an undisclosed secure location.

Investigators' most definite conclusion about the capsizing at the mouth of Tillamook Bay was the importance of life jackets. The boat's orange vests were worn by all the survivors and none of those found dead.

The Taki Tooo was believed to have enough life jackets for all aboard, although passengers and crew are not required by law to wear them.

Among the victims were a group of co-workers on their annual fishing trip, a dad who flew in for a special father's day outing and one man who made a last minute decision to come on board, reports CBS News Correspondent Hattie Kauffman.

Brian Loll, who lost his father, said the trip "was the one thing he wanted, man. And he was excited. He always wanted to go deep-sea fishing."

As the investigation got under way and the victims returned home Sunday, the ocean search ended for two men still missing. Officials said the men could not have survived long in the 50-degree F water.

The entrance to the bay is known for its wild and unpredictable waves and currents. But conditions were especially bad Saturday morning, so bad that several other fishing charters canceled their trips rather than risk the high seas.

The Taki Tooo flipped over after setting off from a harbor that had been closed to recreational boats because of waves estimated at up to 15 feet high.

U.S. Coast Guard Master Chief Lawrence Kent said some charter captains venture into the waves as long as they fell "there's enough of a lull between the waves so that they could safely make it out."