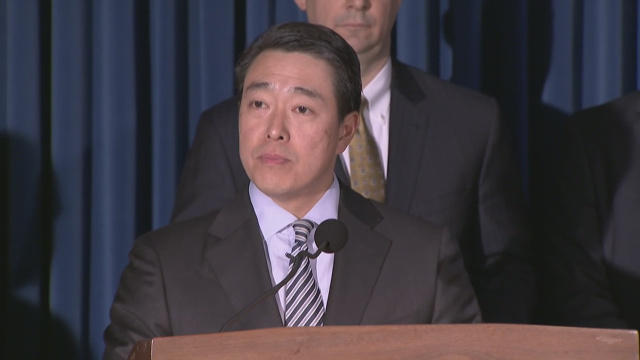 NEW YORK -- A former New York City police lieutenant, two former police officers and a lawyer who once worked as a prosecutor were arrested in a federal gun licensing probe Tuesday as authorities described a scam in which police employees traded speedy handling of gun permits for paid vacations, jewelry, catered parties, cash and visits to strip clubs.

According to court papers, the trading of gun licenses for bribes stretched from at least 2010 to 2016. Authorities said members of the NYPD License Division solicited and accepted bribes from individuals who charged customers fees to secure gun licenses.

“The alleged corruption pervaded the license division up to its senior level,” acting U.S. Attorney for the Southern District of New York Joon Kim said Tuesday.

Among those charged was Paul Dean, a police lieutenant and the second-highest ranking member of the License Division when he retired in January 2016. He supervised about 40 uniformed police employees and had ultimate authority to approve or reject licenses and upgrade requests, authorities said.

A criminal complaint filed in Manhattan federal court said the former officers charged accepted bribes from a “gun license expediters,” and in exchange would “issue gun licenses to whoever the expediters brought them without question,” Kim said.

A criminal complaint says Dean and another former officer, Robert Espinel, in 2015 “solicited and accepted food, alcohol, parties, dancers and prostitutes” from a gun license “expediter.”

It was not immediately clear who would represent Dean and Espinel at an afternoon court appearance.

According to a criminal complaint, Chambers marketed himself to potential clients as the “Top Firearms Licensing Attorney in NY” and said he specialized in interview, appeal, hearing, renewal, incident, or any other issue arising regarding gun licensing.

The complaint said he gave members of the NYPD License Division tickets to Broadway shows and sporting events; sports memorabilia; an $8,000 watch; and cash hidden in magazines.

The lawyer had clients on Long Island.

Attorney Barry Slotnick, representing Chambers, said Chambers will plead not guilty to the charges, which include conspiracy.

“He’s an excellent lawyer. We do believe that he has not done anything inappropriate or wrong,” Slotnick said.

The arrests are part of an ongoing probe that led to a shake-up of the NYPD’s licensing division last year. In June, federal prosecutors charged two former members of the division with conspiracy to commit bribery.

David Villanueva was accused of accepting cash, liquor and limo rides to push through the approval of gun license applications. Richard Ochetal pleaded guilty to the same allegation and cooperated with federal investigators.