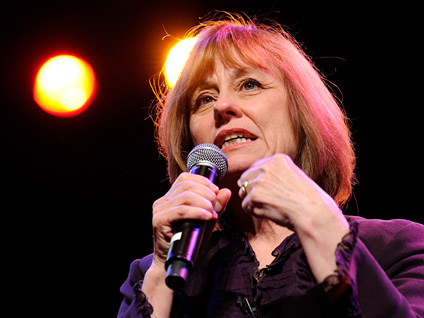 The rise of anti-Muslim sentimentin America has brought with it a wave of largely-unsubstantiated suggestions from conservative media commentators and politicians that America is at risk of falling under the sway of Sharia law.

First, a definition: Sharia law is strict Islamic law. It is designed to guide devout Muslims in their personal and professional dealings, and has been used by the Taliban and others to justify limits on women's rights and harsh punishments, including amputation and stoning. (It is open to interpretation, however; here's a helpful backgrounder from the Council on Foreign Relations.)

"They are building mosques all over the place," the questioner told Angle. "They want to build one near [ground zero]. And they seem to be getting their way. On a TV program just last night I saw that they are taking over a city in Michigan."

After stating that the "militant terrorist situation" in question "isn't a widespread thing," Angle said this: "First of all, Dearborn, Michigan, and Frankford, Texas are on American soil, and under Constitutional law. Not Sharia law. And I don't know how that happened in the United States."

"It seems to me there is something fundamentally wrong with allowing a foreign system of law to even take hold in any municipality or government situation in our United States," she added.

The statement drew a rebuke from Dearborn Mayor Jack O' Reilly, who said Angle "doesn't know what she's talking about." (As for Frankford, it reportedly doesn't exist, but is a former town annexed into Dallas 35 years ago.) The Dearborn claim may have been grounded in the arrest of four Christian evangelists for disorderly conduct at an Arab cultural festival in June, which some conservatives took as evidence that Sharia law had come to Michigan.

The notion that Sharia law is coming to America has been percolating in the conservative media for a while. Fox News' Sean Hannity suggested the arrest of the Christian missionaries in Dearborn reflected the possibility that "Sharia law is taking over in Dearborn," as did Fox News' Brian Kilmeade, who interviewed one of the men who was arrested.

At the Values Voters summit in September, Newt Gingrich said - to a standing ovation - that "[w]e should have a federal law that says Sharia law cannot be recognized by any court in the United States." He has also warned that jihadists are trying "to replace Western civilization with a radical imposition of Sharia."

To support his argument, Gingrich cites a 2009 judgment in New Jersey that a man had not sexually assaulted his wife because his behavior was "consistent with his practices." The decision was later overturned, and stands as "the one and only instance of stealth sharia that anyone has been able to find," according to the Washington Post's Eugene Robinson.

The outcry over Sharia law has been tied in large part to the controversy around the Islamic cultural center two blocks from the site of the Sept. 11 attacks, as well as other mosques around the country. In August, Dick Morris said on Fox News that the cultural center will be used to "train and recruit Sharia law advocates who become terrorists."

Meanwhile, a former county Republican Party chairman told the Washington Post that residents opposed to a proposed mosque in Tennessee are worried that "the Muslims coming in here will keep growing in numbers and override our system of law and impose Sharia law."

On the Internet, which is awash in warnings about Sharia law, Pamela Geller of the influential conservative blog Atlas Shrugged warns of "creeping Sharia" in the United States.

"It's a drip, drip, drip, drip, drip. The mosque-ing of the workplace where you're imposing prayer times on union contracts, non-Muslim workers have to lengthen their day: it's wrong," she told the New York Times. "And in places like Greeley and in Marshall, in Colorado, the media doesn't report on it, but they've come to fisticuffs, there's been rioting."

Geller's comments prompted the Atlantic's Jeffrey Goldberg to write that "a Martian takeover of New Jersey is more likely than the imposition of a caliphate, or of Muslim law, on America." He added: "Only a true paranoid could look at America as it is today and see the creeping takeover of Islamist caliphate ideology."

But Geller is far from alone in suggesting that Sharia law is making inroads. In the right-leaning tabloid the New York Post this week, columnist Andrea Peyser warned readers that "[c]oming soon to a TV in your child's bedroom is a posse of righteous, Sharia-compliant Muslim superheroes."

Peyser quoted a column suggesting the show was designed to indoctrinate children and said it "has the seal of approval of a Sharia board."

On November 2nd, voters in Oklahoma - a state not exactly awash in Islamic activity - are expected to vote in favor of a "Save Our State" constitutional amendment forbidding the state's courts to consider Sharia or international law in making rulings.

Backers of the law say they don't want the United States to go the way of the United Kingdom, where the archbishop of Canterbury generated an uproar more than two years ago by suggesting that British law make room for Sharia. British newspapers reported later that year that "the government has quietly sanctioned the powers for Sharia judges to rule on cases ranging from divorce and financial disputes to those involving domestic violence." (Tribunals grounded in Sharia law are only binding if both parties agreed to give the judges power to make rulings.)

As it turns out, U.S. courts "already recognize and enforce Sharia in everything from commercial contracts to divorce settlements, to wills and estates," as NPR reports.

The system in the U.S. is similar to Britain: Courts are open to honoring agreements made under Islamic (or Christian, or Jewish) law and worked out by religious tribunals - within reason. As Marc Stern of the American Jewish Committee told NPR, U.S. law supersedes religious agreements when those agreements are seen as grossly unfair. For example, when a Muslim husband in Maryland argued that he should be allowed to give his wife nothing when they divorced, citing Islamic law, the courts ruled that he did not have the right to do so.

All this isn't to say that there isn't the possibility that a greater Muslim presence in the United States won't have some impact on the law; Christian-backed blue laws, which limit the sale of alcohol on Sundays in order to foster religious observance, are a good example of such religious influence.

But considering that there are perhaps two million Muslims in the United States, a country with a population of more than 310 million, fears of an outbreak of Sharia law seem overblown at best. Even if there is somehow a serious push for the imposition of Sharia law - or any other religious law - it would quickly run up against the first amendment to the Constitution.