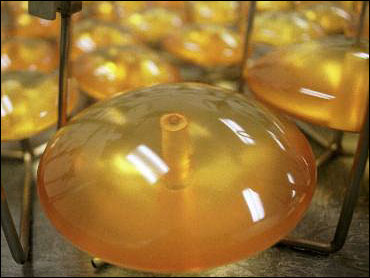 The Food and Drug Administration has rejected Inamed Corp.'s bid to bring silicone gel breast implants back on to the market, the company announced.

The decision, transmitted in a "Not Approvable letter," comes three months after FDA advisers narrowly recommended that the controversial implants return.

The company said it was told by FDA that it had to provide more information before further review of the implants could go forward. Inamed did not specify in its statement what information the FDA was seeking.

"Although we are disappointed with the current outcome, we appreciate the serious and thorough review" of its application, said Nick Teti, chief executive officer of Inamed.

He said the company would seek approval again after learning exactly what information FDA wants to ensure that silicone gel breast implants are safe.

The FDA will outline those steps later Thursday.

The decision was greeted with relief by women's groups who had insisted that the implants were never properly studied under FDA's strict requirements for other medical devices.

"Their decision sends a crystal clear message to women that silicone gel breast implants are not proven safe," said Diana Zuckerman of the National Center for Policy Research for Women and families.

The FDA ended routine sales of silicone breast implants in 1992, restricting them to breast cancer patients in strictly controlled clinical trials, because of complaints that they frequently broke, leaked and caused painful disorders.

Inamed had argued that the implants break no more often than implants filled with salt water, which are currently on the market, and that they don't cause life-threatening health problems.

In October, the FDA asked outside scientists for advice.

In emotional testimony, dozens of women argued that the silicone gel implants broke inside their bodies and left them permanently damaged while dozens more begged for access to them, saying gel implants feel more natural when used to repair cancer-ravaged breasts or are used to make breast bigger.

The advisers recommended, on a 9-6 vote, the sale again of implants. But the chairman of the advisory panel, in an unusual move, then asked federal health officials and lawmakers to disregard that advice.

As the panel's chairman, Whalen could not vote unless there was a tie. But in a letter obtained by The Associated Press, he wrote FDA Commissioner Mark McClellan and five members of Congress about his "very strong reservations concerning this vote."

"Long-term safety, the concern that prompted the removal from the market 11 years ago, was clearly not demonstrated," Whalen wrote.

Also "extraordinarily troubling," he added, is the enormous costs that women face for additional surgeries and removal of broken or painful implants. "This is a public health issue of no small import that must be addressed should the FDA second this misguided panel decision," Whalen said.

But the FDA has worried that rare diseases aren't settled, and that subsets of women — especially the small proportion who have silicone leaking through scar tissue into the breast or beyond — might be more vulnerable to painful conditions like fibromyalgia.

Even after three years, up to 46 percent of silicone implant recipients in a key Inamed study needed additional surgeries because of painful scar tissue and other complications. Up to a quarter of the women had to have the devices removed or replaced.