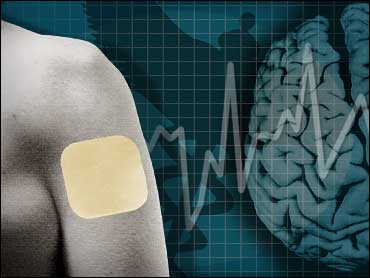 The first skin patch to treat depression won federal approval Tuesday, providing a novel way to administer a drug already used by Parkinson's disease patients but that belongs to a class of medicines that is rarely a first or second choice antidepressant.

The Food and Drug Administration approved the selegiline transdermal patch, agency spokeswoman Susan Cruzan said. The drug will be marketed as Emsam, said Somerset Pharmaceuticals Inc., which developed the drug, and Bristol-Myers Squib Co., which will market it in three sizes as a once-a-day treatment for major depression.

"We believe Emsam will help physicians treat their patients living with this illness through a new and unique delivery system," said Peter Dolan, chief executive officer of Bristol-Myers Squibb.

Selegiline, approved in pill form by the FDA in 1989 to help treat Parkinson's, is a monoamine oxidase inhibitor, or MAOI. Typically, doctors prescribe MAOIs for depression only if patients don't respond to other antidepressants, including selective serotonin reuptake inhibitors like Prozac, Zoloft and Paxil.

Although health officials say MAOIs are safe when used correctly, the drugs can cause dangerous interactions, including sudden and severe rises in blood pressure that can lead to stroke and death, when patients consume food or drinks that contain a substance called tyramine. The substance is found in draft beer, red wine, fava beans, salamis, aged cheeses, soy sauce and other products.

Bristol-Myers and Somerset said Emsam patients, when using the six-milligram or lowest strength patch, shouldn't have to watch their diets. That represents a "significant advance" over other MAOIs typically taken in pill form, said Dr. Steven Galson, director of the FDA's Center for Drug Evaluation and Research.

However, patients using the larger nine- or 12-milligram versions of the Emsam patch still must adhere to the same dietary restrictions that have made many doctors reluctant to prescribe MAOIs.

The Emsam patch's label will carry a long list of foods, drinks and other drugs that patients must avoid while using the drug. The warnings are typical of all MAOIs.

The FDA also will require the drug to bear a so-called "black-box" warning of the risks of suicidal thoughts and behaviors in children and adolescents treated with antidepressants. The drug is meant for use only by adults.

The companies said 14 million Americans a year suffer from major depression, citing a 2003 Journal of the American Medical Association study.

Sharpton will be joined by Gwen Carr, the mother of Eric Garner.