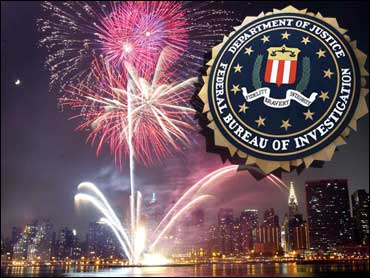 A constant stream of intelligence indicating that al Qaeda wants to strike the United States this summer or fall has led federal officials to urge increased vigilance during the Independence Day weekend.

But in a bulletin sent to law enforcement agencies nationwide Thursday, the FBI stresses that the U.S. has "no specific credible threat reporting that terrorists are planning to target the July 4th celebrations," reports CBS News Correspondent Stephanie Lambidakis.

The bulletin said police should step up patrols and watch for signs of terrorist activity, including surveillance of potential targets. The FBI also listed advice on how to spot possible suicide bombers.

"We know the U.S. homeland remains a top al Qaeda target," the FBI said in the bulletin, sent weekly to 18,000 state and local law enforcement agencies.

Fourth of July celebrations are among the symbolic events that U.S. officials say could present an inviting target to al Qaeda, which intelligence reports indicate will attempt an attack during summer or fall. An attack also could be timed to coincide with the national political conventions or the November elections, plus the Olympics in August in Athens, Greece.

The FBI said police should increase patrols this holiday weekend, vary the timing, size and routes of the patrols, and make sure all vehicles illegally parked in key areas are approached and their drivers questioned.

The Homeland Security Department had no plans to raise the nation's color-coded terror alert level above its current midpoint status of yellow, or elevated. Last week, the agency sent a bulletin urging tighter security to state and local officials and those that operate power and chemical plants and key transportation facilities.

The government's approach to this major U.S. holiday was muted in comparison to Memorial Day, when the FBI and Attorney General John Ashcroft issued high-profile warnings that terrorists were nearly ready to strike. In Florida this week, Ashcroft repeated his contention that al Qaeda was between 75 percent and 90 percent ready to attack again.

A pan-Arab newspaper reported Friday that a statement issued in the name of the al Qaeda terror group has warned European states they have only two weeks to withdraw troops from Iraq or face the consequences.

Asharq al-Awsat said it had received a statement from the "Brigade of Abu Hafs al-Masri (al Qaeda)," the group which claimed responsibility for Madrid train bombings on March 11 that killed about 200 people.

The statement referred to the three-month cease-fire for attacks in Europe that the leader of al Qaeda, Osama bin Laden, declared on April 15.

"To the European people: only few days remain for you to accept the truce offered by bin Laden. Otherwise you will have nobody but yourself to blame," the paper quoted the statement as saying.

FBI Director Robert Mueller told reporters Thursday in Seattle that local, state and federal officials must cooperate to prevent a new terrorist attack. The lack of such cooperation, from the federal government on down, has been cited by congressional and independent investigators as a key reason the Sept. 11, 2001 plot was not detected.

"We try to use our imagination to determine where the next threat might come from," Mueller said after a visit to the FBI's Seattle field office.

The FBI bulletin cited recent intelligence that continues to show al Qaeda interest in attacking a range of facilities, including gasoline stations and refineries; financial and government institutions; civil aviation; nuclear plants and dams, and subways and freight trains.

Terrorists could seek to replicate attacks overseas that have used bombs in vehicles, assault teams armed with light weapons and suicide bombers, the FBI said.

Around the country, state and local officials echoed the federal government's approach to the Fourth.

"We're encouraging New Yorkers to enjoy the holiday but to remain vigilant and aware of their surroundings," said Lynn Rasic, spokeswoman for New York Gov. George Pataki. "Security will be strong and noticeable at public events across the state."

In Atlanta, the city transit system canceled days off for police and planned random sweeps of trains with bomb-sniffing dogs, spokeswoman Kimberly Willis Green said. And in Washington, police were setting up 19 security checkpoints along the National Mall for people to enter to watch the nationally televised fireworks show on Sunday.

In the April 15 audio tape, bin Laden gave Europeans three months to withdraw their troops from what he called the countries of the Muslim nation. Bin Laden warned against any "aggression" against countries such as Iraq and Afghanistan.

U.S. officials and some terrorism experts believe the Brigade of Abu Hafs al-Masri (al Qaeda) lacks credibility and has only tenuous ties to al Qaeda. The group has claimed responsibility for events to which it was not connected — such as blackouts in North America and Britain.