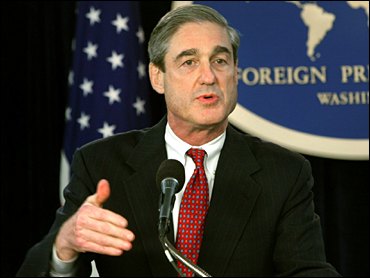 Cooperation with the U.S. war on terrorism is improving in Arab and Muslim countries, particularly those hit by attacks by al Qaeda and its affiliates, FBI Director Robert Mueller said Tuesday.

Mueller told a group of foreign journalists that the FBI has seen cooperation rise "dramatically" in these countries, especially in investigations targeting the sources of terror financing.

"We have seen substantial increased assistance in addressing the financing of terrorism throughout the Middle East," Mueller said in an appearance at the State Department's Foreign Press Center.

Mueller declined to name the countries, but deadly terror attacks have recently occurred in Saudi Arabia, Turkey, Morocco and elsewhere. In addition, terrorists have struck foreign embassies in Iraq, including that of Jordan, and bombed United Nations offices in Baghdad.

Mueller said that despite the international gains made against al Qaeda, it remains a dangerous network with affiliates or sympathizers in many parts of the world.

"They are a fragmented operation around the world about which all of us must be concerned," Mueller said.

Mueller also sought to assure Arabs and Muslims that the war on terror was not aimed at them for ethnic or religious reasons. He said that "99.9 percent" of Arab-Americans and Muslim-Americans are patriotic and oppose terrorists, and that the FBI is committed to investigating instances of hate crime or civil rights violations targeting them.

"When we hear about it, we will investigate it," Mueller said. "When we prosecute, we will convict and they will go to jail."