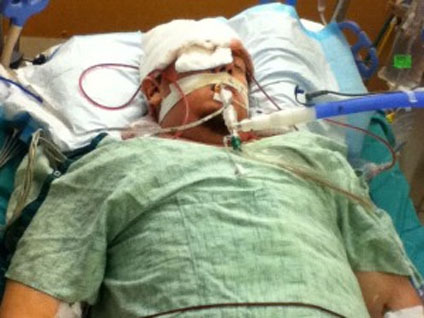 (CBS News) AURORA, Colo. - One of the critically injured victims from the Aurora theater shooting is getting better, reports CBS4- Denver.

On his Facebook page, family and friends say that Caleb Medley is slowly getting better and could move out of the intensive care unit as soon as next Tuesday or Wednesday.

They say he is still heavily sedated, but is following commands and is able to open his left eye. Medley's wife gave birth to their son Hugo in the days after the shooting.

The family says Hugo is doing well and getting big.

In an interview with CBS News' John Blacksone, Katie Medley described the nightmare that began as a midnight movie date.

"It was awful," said Katie about being nine months pregnant and her husband wounded.

Hugo was born in the same hospital where Caleb remains heavily sedated in intensive care.

"He was in surgery," said Katie of Caleb. "He was having brain surgery while I was in labor. It was crazy."

Caleb doesn't have health insurance. A website set up to help the family.

Colorado prosecutors have filed 24 counts of first-degree murder against the alleged shooter James Holmes, and 116 counts of attempted murder. His lawyers are contending he is mentally ill.